For a morning magazine programme hosted by English TV presenter Louise Ekland, France Télévisions commissioned SIS LIVE to equip a double-decker bus with broadcasting facilities. Its technical team can produce and broadcast a 50-minute live studio programme while the bus travels around the best-known London streets.

In addition to the broadcasting facility, the bus also contains everything necessary for live broadcasting within an extremely reduced space.

“Considering the limited space on board, we had to design the most compact infrastructure possible,” says Yann Le Chanony, systems integration manager for SIS LIVE. “The other challenge was also to set up everything (cables, integration, tests) in 15 days.” 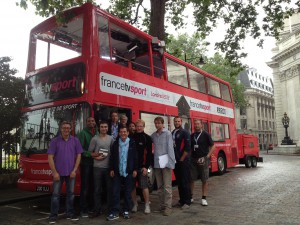 The audio visual engineer uses two Tcube double colour correctors. The sound engineer, within extremely limited space, has a small Mackie VLZ pro 1642 desk and a Presonus dB8 eight-channel preamplifier. To record the programme, an AJA Kipro and a Panasonic AJ HPM110 AJA recorder are in the production area at the back of the bus.

“We use a generator to power all the facilities on the bus, and we have backup batteries in case of a breakdown,” says director Franck Thebault. “Over and above the space restrictions, the main difficulty resided in the fact that each staff member had to cope with working on board a moving bus. Firstly, the problem of the vibrations had to be overcome during filming, and, secondly, I must say that I felt quite queasy when we first started shooting. Fortunately,” he adds, “it’s becoming a lot easier to cope with as the days go by.”