Imagine Communications (stand #4.A01) is displaying the Versio microservices-based playout solution at IBC 2018.

Versio — Playout Platform of Choice for Media Companies Across the Industry
In the last three months alone, Imagine has put more than 100 channels on air with the award-winning Versio playout solution.

“Imagine was a very early advocate for cloud-native and microservices-based innovation, and it took time for the industry to understand and accept this significant technology shift,” says Steve Reynolds, president of Playout and Networking at Imagine Communications. “We are proud that our Zenium microservices platform and our Versio playout solution have moved from ‘pioneering’ to ‘proven’, allowing customers around the world to deploy next-generation technology with confidence. Time and time again, we have shown that no other system provides the flexibility or the time to market advantage of Versio.”

Reynolds continues, “The evolution of Versio has never been about technology for technology’s sake. It’s about delivering practical innovation to address the real-world challenges our customers face as the industry continues to transition to new business models and new distribution opportunities. Versio is more than a next-gen architecture — it’s about providing a business advantage to every customer, no matter where they are in that transition.”

Over the past year, Versio has been deployed by media companies around the world in multiple applications including Atresmedia, a Spanish commercial broadcaster that complemented its existing Versio integrated playout installation with a Versio-based disaster recovery playout center; Jawapostv, an Indonesian news broadcaster that chose Versio for the upgrade of its master control room for HD playout operations; and Dubai’s Abu Dhabi Media, which used Versio as the foundation for a full upgrade of its central technical facility, which currently supports playout of 15 HD channels, but is future-proofed to incorporate IP connectivity.

“Imagine Communications demonstrated that it could marry broadcast quality and reliability with virtualized technology and IP networking, and, perhaps most importantly, could deliver it immediately,” says Philippe Van de Velde, Technical Director at Médias du Sud/VIA.

In one recent high-profile project, Versio enabled True Visions, a leading cable and satellite operator in Thailand to deliver this year’s worldwide football championships in 4K Ultra HD. The initiative represented the first Ultra HD channel in Southeast Asia, and it was designed, built, tested, proven and put on-air in just four weeks. The unique microservices architecture of Versio enables this rapid time to market, leading the industry in innovation, flexibility, and customization to meet the needs of broadcasters around the world.

In North America, Sinclair Broadcast Group (SBG) was among the first — if not the first — major broadcaster to move a critical operation to a fully virtualized public environment when it launched KidsClick late last year, using Versio to distribute the new children’s programming block from the public cloud to affiliates across the country. In addition to near-limitless scalability and resource elasticity, SBG can take advantage of running an operating business model and Software as a Service (SaaS) pricing scheme, eliminating dependence on capital expenditures normally associated with traditional channel expansion or technology refreshes.

“The scalability and customization capabilities that the public cloud approach offers is unlike anything we could do using a traditional, on-premises model,” says Del Parks, CTO, SBG. “And since we’re only delivering this programming for a few hours a day, the flexibility of originating in the public cloud is a far superior alternative to purchasing traditional equipment that would sit idle for many hours at a time.”

Reynolds added, “Other companies at IBC will be showing microservices-based technology, but they are just starting the POC process. Imagine has been doing this for four years now, and our extensive, hands-on experience has helped us advance from technology leader to leader in market acceptance and real-world deployments.”

Highlights of Versio Playout
Imagine has added MPEG-DASH support to Versio Platform, enabling extremely high-quality and low-latency proxies for quick turnaround review of media that simply is not possible using other systems. Ubiquitous across browsers and player plugins, this streaming format simplifies implementation by significantly reducing the need for custom code or licensed codecs for any customer-specific UI or API. The use of MPEG-DASH was pioneered for OTT delivery, but has now been proven as a scalable, cost-optimized solution for a wide range of high-quality video applications. The MPEG-DASH format also easily carries multiple audio programs and caption/subtitle tracks in industry-standardized formats. Other available solutions require either additional proprietary equipment to perform this function, or vendor-specific proprietary implementations.

Media companies using Imagine’s widely adopted ADC automation can now continue on their platform of choice, while layering in new features and capabilities that the Versio playout engine offers. At IBC2018, Imagine will demonstrate how customers can use Versio Redundancy to synchronize ADC and Versio playlists and integrate content metadata to existing environments. This unique capability enables media organizations to operate hybrid environments of legacy and next-gen systems, as well as enabling a seamless and staged migration to Versio Automation for operations transitioning to full next-generation architectures.

“Container” functionality is a new addition in Versio Automation. Containers are high-level packages of primary and secondary events, which can be treated as a single object. These objects can be created manually or generated from a Traffic system and are easily expanded, collapsed and re-ordered. This innovative approach to schedule management streamlines media workflows and significantly improves operational efficiency compared to traditional, cluttered systems.

In Versio Ingest, Imagine will demonstrate new pooling and redundancy functionality. Rather than “fixed channels,” Versio Ingest will distribute record bookings across available channels of all chassis to ensure that main and redundant records are never on the same server. Pools can reserve channels for scheduled records, secondary events, crash records or “unassigned.” This industry-first capability offers media organizations an intelligent way of leveraging fewer hardware devices, simultaneously supporting contemporary and legacy hardware such as Imagine Nexio®\ media servers, and reducing overall cost. 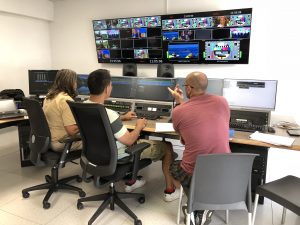 At each site there are two Versio networks — main and backup — providing playout, graphics, subtitling, and master control switching. All functionality is provided as microservices-based software, running in the Imagine Communications Zenium environment. The networks support both IP and SDI content feeds.

A key requirement for the two new remote installations was to enable a seamless workflow between the playout system and France Ô’s traffic and scheduling system from Lora Solutions. To achieve the slick workflow France Ô required, Imagine Communications collaborated with Lora Solutions, who integrated some Versio metadata to allow intelligent, reliable and speedy content exchange between the two systems.

“Before we implemented the Versio software solution, we undertook a careful proof-of-concept to be sure that it would seamlessly support a hybrid environment,” says Erwan Roth, CTO of France Télévisions Outre-Mer. “Our Paris installation has been on air for more than a year now and is delivering the capex and opex savings we sought, as well as meeting all our quality requirements. When Imagine Communications and Lora Solutions showed they could provide the integration we were looking for, we decided to move forward with a Versio automated playout environment in Mayotte and Tahiti.”

Imagine Communications’ Mathias Eckert, SVP and GM EMEA and APAC, Playout & Networking, added, “Our microservices approach and the Zenium environment allow us to readily add functionality and unique workflows by simply expanding the capabilities of our software solution. In this case, it enabled us to work with Lora Solutions to create a clever workflow that gives France Ô staff intuitive control over content movements, playlists and as run logs.”

The Paris playout centre has been on air with its Versio platform since the summer of 2017. The Tahiti facility came online in May 2018, and Mayotte will be completed towards the end of 2018.

Janata TV in Nepal Automates Playout with Imagine Communications
Imagine Communications has supplied a virtualised playout and asset management system to Janata Television, based in Kathmandu, Nepal. Janata (which translates from Hindi as “the people’s”) TV is part of the Nepalese Janata media company, which is also active in radio and publishing.

The channel, which first went on air in 2017, delivers a 24/7 service of news, entertainment, and other content. To improve productivity and reliability, the channel needed to deploy an automated playout and media handling system that would be simple to maintain and develop in Nepal. Janata TV turned to Imagine Communications, which implemented a simple and secure design based on virtualised software running on commercial off-the-shelf (COTS) hardware.

The new, automated workflow is supported by Imagine Communications’ Nexio®️ Motion asset management software and Versio integrated playout solution. As well as handling playout, Versio also provides the engine to design and drive workflows, making it a true channel-in-a-box solution. The software-based solution makes the entire system extremely compact, as well as readily secured through redundant signal paths and hardware. It also made the implementation at Janata Television swift.

“We needed to implement a powerful and stable system,” says Laxman Humagain, general manager of Janata Television. “We also needed to get it installed and running without impeding our existing daily work. Imagine Communications offered not just a neat and powerful solution, but also a plan to implement it and get our staff trained and ready to go, with minimum disruption to our operations.”

“This is our first Versio installation in Nepal, and we are proud to be working with Janata Television on this project,” says Eckert. “Our solution provided Janata with a user-friendly, effective and secure interface so staff could quickly become productive — developing their workflows and delivering great content to the audience across Nepal.”

Broadcast Technology Limited was the systems integrator on this project at Janata Television.

Versio, among the industry’s most comprehensive playout solutions, is 100% software running on COTS hardware. The cloud-native, microservices-based playout solution is designed for pure-IP, geo-dispersed environments. Versio is portable to all deployment environments, including premises-based appliance approaches, hybrid IP/SDI solutions or virtualized in private data centers or as public cloud deployments.

At IBC2018, Imagine will demonstrate a complete Versio-based playout and media workflow platform spanning from ingest, prep and playout to automation, graphics, master control and branding. The company will also showcase various transition scenarios that allow customers to gradually layer in new features and capabilities that the Versio playout engine offers — and migrate from traditional to next-generation playout operations at a pace that works for their operation, whether in a traditional broadcast center, a data center, or private or public cloud.