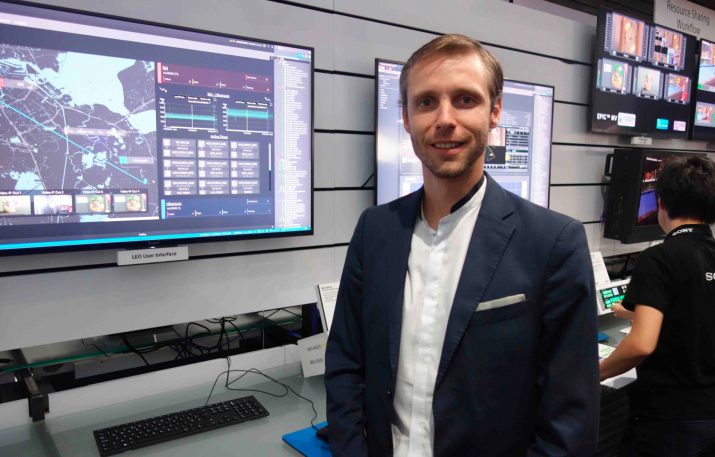 At the show Norbert Paquet, head of product management at Sony Professional Solutions Europe, brought SVG Europe up to date with the key product and partnernship announcements and what they mean in the context of Sony’s IP Live evolution.

Norbert Paquet: “In terms of highlights at the show, in acquisition there is the new Z750 camcorder which will really re-set the benchmark in documentaries and sports applications like pre-game, post-game, interviews, fan experience and so on.

“We have a significant sporting event next year, where the organisers are setting 4K as a master delivery format. We think this camera will get a lot of traction from the broadcasters, whether they are producing in HD or UHD, HDR or SDR — you can record both at the same time.

“The FX9 is more on the creative side, even though we see a lot of sports documentaries shot with large format sensor cameras. And in that context, the auto focus system we bring with the FX9 will be a key help for operators.

“And we’re looking at two directions in terms of workflow efficiency for the 3500 and 5500 studio cameras, announced at IBC last year and then at NAB this year. One is illustrated by the capacity to record directly into the CCU – that’s a new thing we’re launching here.

“Associated with that is that most often now, people want to collaborate through cloud. Here we have a tool that sits between any recording device and the cloud, especially Sony Ci Media Cloud, called Ci Relay. This is based on watch folders: any content coming into a watch folder will be directly recorded into a Ci workspace, in a secure and reliable manner on the one hand, but also directly transcoding a proxy that a producer can review immediately on their phone.

“Today in sports workflows you ingest a lot of content and highlights and then you need to carry an awful lot of the media back to the station or truck or master control room environment. [Now] all your content will be put straight into the cloud, for any producer to start to review.

“The other side of acquisition is with the new IP adaptors, where basically we’re going to turn any camera straight into an IP camera. Today we have IP capability into the CCUs, which is good for customers in a hybrid environment, transitioning from SDI into IP. But for the ones already in full IP or who want to go to remote production, they can have a dedicated box from the camera as a straight 2110-compliant output. That’s good for remote production, obviously, as well as for in-house production where you can be more flexible in allocating your resource.

“Now with IP, we really believe we can facilitate reconfiguration for remote production, and all of this relies not only on IP as a technology but also what we call the orchestration layer: how we can bring an intelligence, a bit like plug-and-play if you like.

“We have the 2110 and NMOS standards for that, and then also a configuration layer, where you’re not only discovering the device but also saying to the device ‘OK, today you’re going to work in 4K HDR at 50 frames per second’. We can save that through our orchestration tool, which is called Live Element Orchestrator.”

“The last one I would like to highlight is the Nevion partnership,” said Paquet. “This is very important for us, in the sense that we want to accelerate and shift the gear in the adoption of IP systems.

“It starts with maturity of the market on the one hand, but also our customers’ understanding as to what they can get out of IP, in terms of workflow benefits, applications and architecture. One important thing, when it comes to IP, is that the foundation of the system is a network. You need to build a network that is reliable and flexible. This is where SDN technology comes into play.

“We analysed a lot of providers on the market and we felt that Nevion’s expertise in building media networks for large organisations, and the technology that they brought into the application for the broadcast world, was a perfect fit to enhance what we can propose in terms of solutions for our customers – whether remote production, resource sharing or main building efficiency. It’s not technology for technology’s sake; it is technology for a business goal.

“I think we’re at a point in the industry where the trust is there. IP is working. Standards will continue to evolve.

“To the question, ‘when will it be finished?’ It’s never going to be finished! The life of IT and networks and virtualisation is evolution – and that’s the beauty. But the foundations are there: 2110-20, -30 and -40 are there, as are ISO-4 and 5, as well as SDN technology. And then it will improve. ISO-4 is already version 1.3. So all of these things will evolve together with technology, standards, vendors, customers and creatives. We can move forward.

“Connectivity is the heart of IP production, and especially remote production. Connectivity access is not there everywhere. All the countries in Europe have plans to develop broadband everywhere. But we must work on compression as well, in order to be able to go into lower bandwidth links.

“The other point on remote production is people. And there are two aspects on the people side. The production thought process: does the director want to be at the event, at the stadium, talking to cameramen and EVS operators on-site? However the engines can be anywhere.

“The second aspect is about engineering skills. Live has to work. Remote production makes a lot of sense in territories like the US or Australia, where you travel for at least three days.

“In Europe, with the size of our countries and the pretty fast turnaround time of a truck between two events, it doesn’t often make sense. And you also have the engineering skills of the teams, the habits of those teams.

“We think it’s going to evolve together with the IT industry merging with the broadcast skills in our industry. And as such, training is important. Our training centre at Pinewood Studios has already trained over 100 engineers over the last three years. And we continue to work with training bodies in the different countries, for people to learn the skills.

“In the end, it’s all about the business model. If you’re able to shift a truck fast enough between two events because the distance is not so huge and the production teams want a quick turnaround and are comfortable, then fair enough. It’s about what our customers want – and then we’ll put the systems, technology, expertise and skills in place,” said Paquet.