Inside Fog Bowl 2.0: How NBC’s Sunday Night Football team adapted on the fly with SkyCam

When fog descended on the Super Bowl LI Falcons-Patriots rematch in Foxborough, MA on Sunday 23 October, NBC’s Sunday Night Football production team was forced to adjust on the fly inside the truck. With high cameras blocked by the fog, SNF executive producer Fred Gaudelli, director Drew Esocoff, and their crew leaned heavily on the pair of SkyCam wired aerial systems at Gillette Stadium for the primary play-by-play coverage.

“When the fog started rolling in [during the first half], it was crazy. I’ve never dealt with that kind of situation,” says Esocoff. “At that point, Fred said we were going to have to figure out another plan. 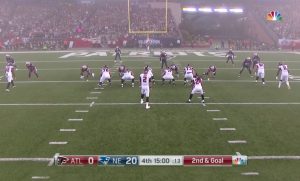 “I knew that SkyCam was used to cover every single play even though it is mostly used to go to tape, so it would be fine [for use as the live game camera]. Those guys, especially our pilot Cody Taylor and operator Ed Martino, did a fantastic job, and we were very happy with it.”

The scene was reminiscent of the classic “Fog Bowl” 1988 NFC Divisional Playoff Game in which fog overtook Chicago’s Soldier Field, creating a similar situation for CBS Sports’ coverage of the Eagles-Bears matchup.

SkyCam comes through in the clutch

The first hint of trouble happened just an hour before kickoff when SNF Technical Manager John Roché informed the production team that its fixed-wing aerial-shot plane was unable to take off.

“[Prior to the game], it looked like a crystal-clear night,” says Esocoff. “When we found out our airplane couldn’t take off, that was the first hint that something bizarre was about to happen.”

As the fog worsened during halftime, Esocoff and Gaudelli plotted out their strategy.

“When the second half began, the main cameras that shoot the play-by-play action of the game seemed to be getting more milky by the second,” Gaudelli said in an NBC statement. “At that point, Drew and I talked about making the switch to SkyCam because both of them were the only unaffected cameras out of the 25-plus that we deploy. We knew we’d be making that switch pretty quickly, the way things were deteriorating visually.”

Fortuitously, NBC was deploying two SkyCam WildCat Systems (both with Sony P1 cameras and Fuji 18×5.4 zoom lenses) for the first time on a regular-season game. As the fog grew worse during the second half, NBC’s traditional SkyCam system served as the primary game camera, and the additional system was used for iso replays. 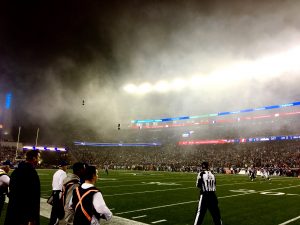 Fog descended on Gillette Stadium, and, by the start of the second half, high cameras were essentially unusable for the NBC Sports production team

“Being in live sports broadcast, we are always ready for either Mother Nature or technology to throw us a curveball,” says SkyCam CTO Stephen Wharton. “It was fortuitous, given the weather, that we had dual SkyCam WildCat systems deployed at Gillette Stadium, creating an opportunity to showcase two totally different looks: one focused on play action and one focused on tactical play development. We have great pride in being able to support this broadcast with our operating teams and technology.”

By the end of the third quarter, the fog had become a central storyline and had to be covered along with the game, Gaudelli points out. “Plus, we had fewer cameras to cover the game because of the conditions. Luckily, we had two SkyCams for this game, and that provided quality replay looks as well.”

In addition to shifting SkyCam’s role in the second half, Esocoff leaned heavily on his low-positioned cameras between plays.

“I wanted to try to use my low cameras as much as I could, because I always wanted SkyCam ready for the snap of the ball,” he explains. “That was the biggest change. I didn’t want to use SkyCam between plays like I normally would. The low cameras were less compromised [by the fog] than the high cameras. I couldn’t be as aggressive between plays, but it wasn’t overly complicated once we figured out the plan.”

Impact on the booth: Calling the game off-monitor

The production team, however, wasn’t the only group hindered by the fog. Up in the booth, announcers Al Michaels and Cris Collinsworth struggled to make out the action on the field and were forced to call plays almost exclusively off-monitor.

“I could see the field minimally,” Michaels said in NBC’s statement. “I could see what the formations were, but, once the play started, it had to be off the monitor. You couldn’t see a handoff or where a pass was going.

“I thought back to when I did the [fog-covered] 1981 Gator Bowl. In those years, there was no SkyCam, but, tonight, our SkyCam was great. I couldn’t see anything that night because the booth at the Gator Bowl was very high, unlike in Foxborough, where it’s relatively low.”

SkyCam as permanent game camera? Don’t count on it
The SkyCam-heavy broadcast drew largely positive reviews from viewers and TV critics, with many comparing it to the primary view featured in EA Sports’ popular Madden NFL videogame. Although the use of SkyCam as the primary game angle creates a dynamic new look, it also has its limitations.

“We’ve long talked about using SkyCam more in the live play-by-play coverage,” says Gaudelli. “However, what’s stopped us is some of the system’s limitations. For one, the ball is always moving away from the camera. Two, there are some geographical limitations to its fly zone, and, three, the system is operated by two people: the pilot, who is in charge of where and how the camera flies, and the operator, who is operating the pan, tilt and zoom of any robotic camera. Those obstacles keep us from using it as a main and constant viewing angle.”

Esocoff concurs that SkyCam is limited when it comes to covering explosive plays that require ultra-fast movement down the field.

“We got lucky because there were no really explosive plays where the SkyCam team would have to make major moves down the field,” he says. “The problem with football is that it’s a game of field position, and the field position is better seen from the traditional game angle because it’s either right-to-left or left-to-right. In a critical situation, my gut tells me, the traditional view is going to be the better view, but, if there was a particular opportunity where I saw a lot of upside potential without a lot of downside risk, I would [use SkyCam as the primary game camera].”