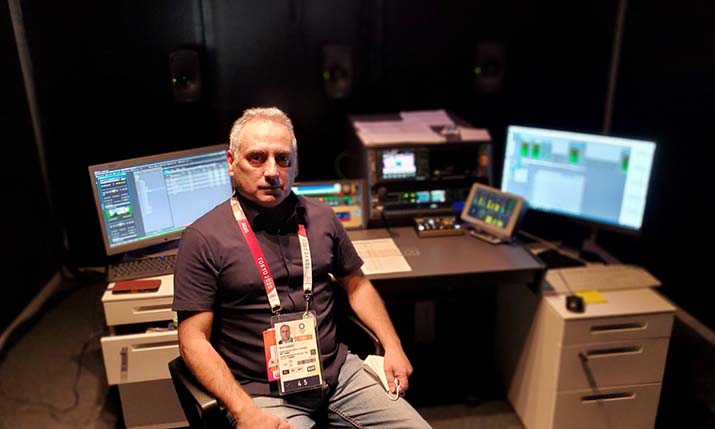 Olympic Broadcast Services’ Nuno Duarte, hard at work in Tokyo during the 2020 Olympics

SVG Europe caught up with Nuno Duarte, Olympic Broadcasting Services (OBS) sound design and audio manager, to talk about the immersive audio revolution that the host broadcaster has bought to its rights holders for both the Summer and Winter Olympic Games. Duarte spoke from Beijing shortly before the Paralympic Games’ torch was lit on Friday 4 March.

Why did OBS decide to do immersive for Tokyo and then Beijing? What was the goal here?

Well, immersive audio is the future – or the present, I should say. There is a lot of demand already from broadcasters for immersive audio. Some other events have started doing immersive audio – events with one sport – but then [we at OBS have] taken up the challenge and done it for two [Olympic] Games in less than eight months. So more than 100 sports and disciplines.

We took the challenge, [and it was] seven years of work [to achieve it], but we implemented it. We thought it was possible, and we made it.

What were the challenges you faced in rolling that out before both Games?

We had the extra challenge on these years [of preparation for the Olympics with] the surprise of the COVID restrictions with crowds. And also [limited] access to the people, to the venues and our team, so it was a huge, huge challenge, besides the immersive audio.

We needed to create something that would be agnostic for the workflow, so the [technology] being used for the different platforms on the different sports. We had so many surprises and so many [choices to make] because [of the variety of sports at the Olympics]; we have ‘box’ sports like handball or football, but then we have ‘online’ sports like outside races, cycling, the marathon, or triathlon in the water, with surf. So it was a fantastic challenge on to how to generate something that could be agnostic and as well, consistent across all of the sports.

And were they all on the ground there with you?

All on the ground, all in the venues, on their own events, mixing. And the same here in Beijing, where we had 118 audio engineers working on the immersive audio experience; some of them had already got experience from Tokyo, maybe more than half of them. But then we also had new guys with the new sports and, wow!

On the first day, the first hour, everybody was there, mixing. It was fantastic.

Were there any issues in Beijing in creating the immersive mix?

No, there was not. We had experience before in the box venues from Tokyo, so for ice hockey, speed skating, and figure skating. We used that experience using 4.0 microphones to generate the third dimension.

For the online sports like alpine, or biathlon, we had experience from the outside races in Tokyo, or from the marathon. So we used that experience and used 8.0 microphones and 4.0 microphones in different points of the course. So it was a challenge, but also we [were able to] solidify our concept.

How do you set up an immersive audio outside broadcast technically?

[The immersive audio experience has] been fantastic. We had many people in our audio team from different areas – so audio engineers, producers, finance, marketing – and they were all impressed with the immersive experience. When we go back to stereo, they said, “no, no, no, it’s not good. We want to keep in immersive.”

How many broadcasters actually made immersive available through to the viewers, for Tokyo then Beijing?

It is getting more and more. So for sure NBC and of course CMG [the rights holding broadcaster in China, formerly referred to as CCTV] already, and NHK also. South Korea TV stations also used it, and we have many more interested in the requirements, so we are going on the right direction.

And what about in Europe? Who in Europe is using it?

I know some TV stations are starting working [with immersive audio] and are doing some tests. I believe after these Games they will solidify their distribution, because now the contribution is clear as to how we provide 5.1.4 discrete, so it’s easy for them to use any kind of encoding system. I believe as well that the Olympic Channel will use immersive audio.

[It’s just the question of how broadcasters] upgrade their systems now, also for 4K video. I believe that when [broadcasters] change over for UHD, they will do immersive as well; actually it’s easier than just keeping it in stereo.

Immersive audio is done; it’s a standard really, you know?

How do you see immersive audio moving forwards?

It’s a standard and it’s a standard for us. Now we have stereo and immersive. So there’s no step backwards. It’s quite effective. It works very well. Like I said, we had more than 100 sports and disciplines [on immersive at the Games], and many, many audio engineers and broadcast engineers. It’s very solid now on our production, so there’s no step backwards, it’s all forwards now.

And the [consumer] technology [is available]; now we can buy soundbars and other devices so that very easily you can have that [immersive] experience at home.

What’s next at OBS in audio? What might we see in Paris 2024? You’ve got immersive as standard, but for the next Olympics you must already have plans on what you want to do to ramp things up.

Yes, we will. We push a lot. To be honest, OBS pushed a lot to do immersive [for Tokyo and Beijing]. I think many manufacturers are not ready 100% for it. We have two years to the next Games [and in that time manufacturers will have to] develop their software and their hardware. They’re going to give us new tools to improve our production in immersive.