Grass Valley has unveiled its 2018 Global IP Barometer study, which reveals fresh insights about the progress of the media industry’s migration to IP.

Supported by the input of approximately 750 media industry professionals from around the world, Grass Valley has found strong indications that the industry’s transition to IP is moving in a positive direction, albeit at a slower pace than some had previously anticipated.

“Two years ago, it was clear that the industry recognized and understood how central IP was going to become to workflows and new, innovative ways of working, yet the market lacked the confidence to invest in IP solutions. Now, we’re seeing more broadcasters, OB companies and service providers forging ahead with adopting IP – or making concrete plans to do so within the next nine months. Hearing directly from customers and prospects alike provides us with greater insight into the support the industry needs during the shift,” said Neil Maycock, vice president, global marketing at Grass Valley. 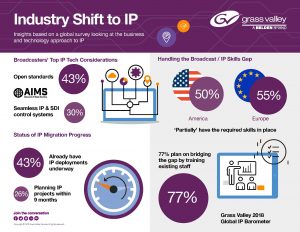 Out of five key technology considerations listed, almost half of all respondents ranked an open standards approach as the most important. 30 percent of respondents indicated that a seamless IP and SDI control system is the second highest priority in terms of technological considerations.

Respondents preferred working with best-of-breed vendors over a single lead vendor by more than a two-to-one margin, further evidence of the desire for open standards and their inherent interoperability.

+ 43 per cent of respondents have IP deployments underway and a further 26 per cent plan to start projects within the next nine months. The need for improved infrastructure flexibility was cited as the leading business priority driving the shift to IP.

+ A hybrid approach is favored by 67 per cent of respondents, which most likely reflects cost concerns coupled with a desire to re-deploy existing SDI equipment.

+ 32 per cent of respondents indicated that cost is now the top concern when considering a move to IP, up from 27 percent as identified in the 2017 Global IP Barometer.

+ The concern about IP compromising the quality of production, however, has decreased from 31 per cent in 2017 to 22 pe rcent in 2018, a reflection of successful IP installations coming online across the world.

+ 50 per cent of surveyed Americans and 55 percent of surveyed Europeans believe they ‘partially’ have the required skills to manage an IP migration, compared to 47 per cent and 56 per cent in 2017, indicating that education and training are still critical to the success of IP.

+ Although there is still a need to bridge the IP skills gap, over three quarters (77 per cent) of all respondents plan to address this by training their current staff internally. Only 14 per cent indicated they will bring in specialist consultants to support the transition to IP, compared to 22 per cent in 2017.

“It is very positive to see momentum behind the IP transition, that’s certainly being reflected in the projects we’re deploying,” Maycock continued. “It is also encouraging to note that the skills gap is recognised and is actively being addressed across the industry. Grass Valley has adopted close customer partnerships to help bridge the skills gap, and used our extensive experience to simplify IP system deployment, without sacrificing the open standard architectures and flexible migration our customers are seeking.”