Is 10 years a long time? Depends on whom you ask, and why. For most people, 2005 seems like yesterday. We can remember, if not quite understand, how we lived our lives without smartphones, tablets, and apps. Few realised what inventions and innovations were to come. Likewise, 2025 seems like science fiction. Can we really predict what’s to come in the next 10 years? Lars Thomsen, one of Europe’s most influential futurist business minds and leader of research and analysis consultancy Future Matters, believes we can. 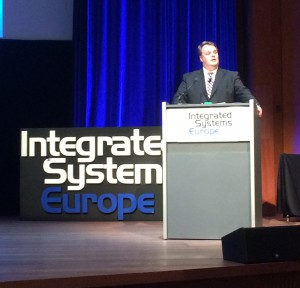 In his opening keynote address at Integrated Systems Europe 2015 in Amsterdam, Thomsen suggested that we can not only spot trends but predict major industry paradigm shifts.

To put 10 years — or 520 weeks, as he referred to it — in perspective, Thomsen referred to a recent speech in which he asked the audience to remember the FIFA World Cup in 2006, which was played in Germany, and to guess which smartphone app was most popular during that tournament. While the audience guessed which app might have been the most popular among German soccer fans, one audience member knew the correct answer: none. The iPhone was invented in 2007.

Of course, 2007 did not bring about universal adoption of the smartphone. Here, Thomsen distinguished between trend and tipping point. A tipping point, he said, occurs when a trend — such as the transition from analog to digital — spurs a paradigm shift, in which the new technology is not only more capable than its predecessor but less expensive.

“Apps haven’t been around for more than 450 weeks. The iPad was introduced in 2010, [which] is only 250 weeks ago, and that was the first version. It didn’t even have a camera,” he said. “All these things changed our lives, and they changed our lives because we are talking about new inventions. Not just innovations but inventions [that] have brought forward a new paradigm, have changed dramatically the paradigm of how we use technology. And, just imagine, many of the things that we take for granted and think are very normal to us today weren’t imaginable 10 years ago.”

Thomsen sees several tipping points on the horizon. Smart devices, as we have come to know them over the past decade, will become increasingly intelligent. Invoking Moore’s Law, he believes that computing abilities of our desktop computers and mobile phones will exponentially increase to the point that these devices not only understand their tasks but anticipate needs, such as responding to e-mail or drafting a PowerPoint presentation.

“It will come to the point where computers are able to learn, to understand, to apply logic, to share learning experiences,” said Thomsen. “We already see that you can talk to your smartphone and it will understand and can talk back to you. We’re coming to the point where we can have in a machine, in a computer, abilities that used to be the abilities of humans.”

Although having a machine respond to the bulk of your e-mails might sound a little frightening, Thomsen argued that this will free the average worker from the “information overload” faced on a daily basis, freeing their mind for more-abstract and creative thinking. Building on his theme of artificial intelligence, he also predicted the growth of intelligent robotics — including drones — over the next 10 years.

The most important tipping point, however, is the point at which our communication and information systems interact and interconnect. Thomsen predicted that the oft debated Internet of Things is “a reality that will capture the whole industry in the next 260 weeks,” one that he believes will connect homes, cities, countries, and beyond.

In the future, he suggested, maybe even the name of the show will be different, as Integrated Systems evolve into a single Integrated System. He urged those in attendance to recognise the capabilities of what their current systems can do and push them to do more. The future, he concluded, holds more promise than problems.

“This conference is all about tipping points in the future. It’s the ability to take the different puzzle pieces, put them in place, and try to see the big picture,” he said. “And it’s important that we see that, because we all have to work together to make this new paradigm of intelligent learning systems a reality for every house, for every office, for our world, because many of the problems that we are having right now are due to the fact that they are not connected and they are not integrated into a system that really makes sense.”