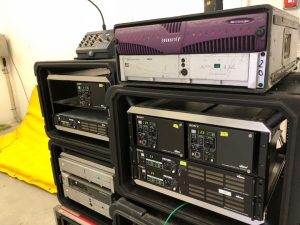 A modular approach to technology informs the Betamedia philosophy of broadcasting

In a new interview with SVG Europe, Rosario Messina – technical manager of Rome-based video production and outside broadcast company Betamedia – discusses the various ways in which contemporary production set-ups can accommodate contrasting approaches to sports broadcasting.

Messina explains: “In television production there are no ‘better or worse’ technological chains; there are different systems with different potential [opportunities]. At Betamedia, a company specialised in the realisation of live television events including important sporting events, we have a personal point of view on the evolution in TV production with regard to the transportation of signals.

“A traditional TV system for outdoor filming is typically composed of a mobile vehicle with a [substantial control infrastructure] onboard connected to all the cables of the cameras involved in the event. Sometimes, especially in the context of sporting events, the cameras are positioned away from the OB van, and often the distance exceeds the native transport capacity of the [specified system].

“In the analogue era, up to 2000, the difficulties related to distances were circumvented with the use of sub-mixing that processed (in tandem with the contribution of a video mixer and a director onboard) the signals of a set of cameras [and conveyed a] sub-mixed signal in the master’s direction. This approach evidently created many problems in terms of the homogeneity and integrity of the final product.

“The arrival on the market around 2002/2003 of optical fiber for cameras connections, however, did not change the panorama as it did not cover more than a couple of kilometres. The only alternative to overcome this limit was to power the camera on-site, with obvious difficulties that often made this an [unrealistic] alternative.

“From about 2002 onwards, the use of fiber started to extend the scope of work, even if it carried few signals derived from the sub-mix. Meanwhile, a disadvantage of this [approach] was that operators in remote cameras did not have a proprietary tally and the intercom was the same to everyone.

“With the evolution of fiber signal transportation these problems were overcome, even if the real issue that remains is that it is essential to create an often complicated and expensive system and, above all, one that must be customised for each location.”

“The next major step was to transform these expensive and tailor-made [systems] into a ‘standard’ facility that could be used 365 days a year. With the launch of the patented FlexiVan system, Betamedia has proposed this in the form of a modular system that houses complete but independent and configurable technical sections [in line with the requirements of the event], so as not to [waste] resources and be able to reallocate them to other events.

“Other companies have instead tried to industrialise the process, camera by camera; that is, instead of clustering cameras, they carried all the signals of one or two cameras at most.

The limit was [came with the need] for lots of fiber to make connections, so the wiring and tests became more complex.

“The next step [in the development of signal transportation] was to use the optical multiplexing CDM technology to make it possible to transport ‘everything’ with a single fiber pair and a possible second pair for redundancy.

“Other methods of transport have been added over the years, such as those of Telecast and Bluebell, which feed the camera on site and allow all the services downstream to be directed.

The limit is that the [Uninterruptible Power Supply] cannot be more than a couple of kilometres from the camera itself.

“The camera with the optical fiber can be taken anywhere as long as it has an electrical point available at a distance that does not exceed the power supply range of the SMPTE cable.”

“Betamedia’s FlexiVan transportable system and its latest version, FlexIPvan, [can be deployed with great flexibility] because the wiring is the same, despite the fact that, for example, distances between the venue and [OB facilities] can change a lot from event to event.

“Obviously, a complete mobile production vehicle often remains by far the best solution. The only problem is the rigidity, i.e. in case of maintenance, the vehicle itself remains stationary and not operational. [Where you have separate modules you simply need] to take the module that needs maintenance out of action while others can continue to work

“Therefore the FlexiVan system allows the delocalisation of resources. The devices that are normally wired – and therefore fixed in direction – are physically placed in mobile modules freed from the central direction and can, therefore, be shared with [or physically moved to] another event.

“In conclusion, the same event managed by two different broadcasters could be approached with very different technical choices. [Ultimately the choices are determined] by the types of event involved and who is making the decisions.”