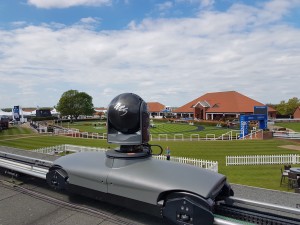 January 1, 2017 marked an important watershed in the UK broadcast production of horse racing with ITV regaining rights holder status after three exclusive years of coverage on Channel 4. Under the terms of the four-year deal, ITV broadcasts around 100 days of racing on its main channel and ITV, including such pivotal events as Royal Ascot, the Derby and the Grand National.

ITV Racing produces extensive coverage for both the two primary channels and the ITV online portal. Primary collaborators throughout the 2017 season include OB services provider NEP and ACS (Aerial Camera Systems), which has been formerly appointed as ITV Racing’s specialist camera supplier for all of its horse racing coverage. Integrity coverage from RaceTech and SIS is also being used extensively.

ITV Sport technical director Roger Pearce confirms that “it is a complex outside broadcast operation and very challenging in every operational area  In particular, we want to present the event live from almost anywhere in the location which makes the operation heavily dependent on RF coverage. This needs expert engineering.”

It is also a set-up that is in the midst of significant change as ITV Sport is “currently changing to a new connectivity contract that will give us SDI video from all the venues, and reverse feeds from all the venues. We are in the run-up period [to this new arrangement] throughout June and intend that it will go live on 1 July.”

Meanwhile, the broadcaster has been benefiting from the feature-set of the new NEP Equinox truck since the start of this season. The high-specification truck is based around an Imagine Communications Platinum IP3 router and features Sony MVS series production switchers, Telex communications technology and a 56-fader Calrec Artemis console, among other core equipment.

Speaking after the conclusion of this year’s events at Royal Ascot, Pearce reveals that “we had a fun week at Ascot. We pushed the boundaries in every area, and the heat was a huge issue for the equipment – but all our facilities suppliers did a great job, and the operational teams were superb despite the very long and arduous live transmissions.”

A number of new camera positions were considered in advance of this season, including an almost live jockey-cam, a cameras in the starting stalls, and live UAV coverage (Batcam facilities). In total, the broadcaster has about 50 cameras to choose from at each event to give viewers “the best possible sense of the experience of being here and experiencing the action up-close” [including specialist cameras provided by ACS – more of which anon]. Production is entirely HD-based for now and Pearce confirms that there has been no active discussion of 4K filming to date. “It has not been considered yet but I am sure it will be when it becomes a commodity and there is a free-to-air capacity for viewing it. It is a gradual process and I don’t think that [in the case of horse racing] it will be that immediate,” he says.

Rob Newton – who is Engineering and Technical Director at NEP UK and Ireland – explains that Equinox is “essentially based on our usual template but with a layout that is completely different to some of our previous trucks. There is a much bigger production area than previously – in fact, it is getting on for half the volume of the truck – [and there is greater] accommodation for lots of incoming feeds. There will be a colossal number feeds [at many of the horse racing fixtures] and that was something that we thought about from the very beginning.” 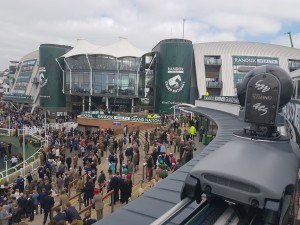 The impetus to implement a traditional SDI infrastructure as opposed to going down the IP route came from ITV – “they specifically requested that it be baseband. Why not IP? Well, they knew exactly what they were going to be doing; the flexibility of routing [that you get with IP] is not required. We know it will be 1080i [for the foreseeable future] and when it comes off contract it will be refitted anyway.” The need for a minimum of maintenance is also critical given that “once the truck is out for the racing then it’s in use every weekend and also during the week a lot, too.”

As the formerly-appointed specialist camera provider to ITV for its racing coverage, ACS (Aerial Camera Systems) supplies a wide variety of systems used to augment the host feed production. “Our tracker is regularly used at most racing events, and [for] larger events we have been supplying aerials, wirecams, railcams, remote heads and minicams,” explains ACS Sales Director Matt Coyde.

Specific recent highlights have included the deployment of the railcam on the roof of the old weighing room at Newmarket for the coverage of the Guineas Festival – a new position brought in by ITV Racing. At Aintree, a similar rig utilised ACS’ curved track for coverage of the parade ring along with a flown track, whilst the Ascot set-up incorporated two wirecams in new positions.

The new deployments are part of a broader strategy to enhance the storytelling that surrounds each race day. “ITV Racing was particularly interested in developing the story and the coverage around the parade ring, meaning our tracks and wirecams have been used in these areas,” says Coyde. “The challenge is always to bring in dynamic angles and shots of the racing, often showing movement and depicting the scale of the event. Together with ITV Racing ACS has identified some new possibilities for specialist camera inclusion in the racing events for the next year.”