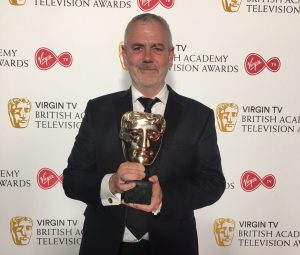 The decision by Racecourse Media Group to award free-to-air broadcast rights for UK horse racing to ITV from 2017, ending a long association with Channel 4, was the cause of plenty of fevered industry debate several years back. But the success of the ITV team with its coverage – which now has an established and popular presenting team in place, and also benefits from additional camera positions – has spoken for itself with robust viewing figures across the busy annual schedule of events.

SVG Europe caught up with ITV Senior Director/Executive Producer Major Events Paul McNamara shortly after ITV Racing collected the Sport award at the BAFTA TV Awards for its 2017 coverage of the Grand National. McNamara remarks that “it was a fantastic honour for the team to be recognised with such a prestigious award. It was a great reward not only for the Grand National programme, but for all the hard work over the last 18 months. We are constantly trying to raise the bar and get better all the time.”

The style and scope of the coverage has undoubtedly evolved over time – as it would naturally with any large-scale, ongoing commitment – and this can be attributed to several primary factors, suggests McNamara. First and foremost is a versatile presenting team led by Ed Chamberlin and Francesca Cumani (who joined the team earlier this year), and also featuring Brough Scott, Oli Bell, AP McCoy and Alice Plunkett, among others.

With Chamberlin, “it was clear from the start that he was going to be the host; rather in the style of Des Lynam or David Coleman in the past, he was going to be the anchor and fulfil that more traditional presenting role. With C4, many different people could take you to and from a break, but now it is either Ed or Francesca, and that is set.” McNamara is effusive about these two presenters, describing Chamberlin as “a fantastic broadcaster who is passionate about racing. He is also a very generous presenter in that it’s not about him or showing how much he knows; instead he wants to find out as much as possible on behalf of the audience. Then Francesca is a great find for us – she has a wonderful knowledge of horses and really works that parade ring.”

Striking a tone fusing the informative and more pure entertainment aspects, and which is also appealing to different groups of viewers, has been integral to ITV Racing’s current success. Highlighting the continual focus on “pacing and variety”, McNamara notes that “we are broadcasting to a different audience from C4. We need to think about the person who is sitting on the channel in the middle of the afternoon and expects to be entertained, but who may not necessarily be a follower of racing.”

McNamara has not found it hard to put himself into this particular frame since although “I am a sports director and producer I am not a racing afficionado as such. So I knew from the start that I was the type of person I was broadcasting to and I would need some things to be explained, as well as wanting to be entertained.”

But although this frankly Reithian educate/entertain dual-emphasis is a constant touchstone, McNamara is well aware that in many regards horse racing is a dream sports broadcasting gig. “You really do have all the elements in place – lots of time, beautiful scenery, fabulous animals, great jockeys, and a thrilling and pulsating sport.”

Technology also plays its part, of course, and in this regard particular attention has been paid to providing additional beauty and special position cameras at all the racecourses. Specific examples include a second wire-cam at Ascot that runs “from the bandstand to the Royal [enclosure] to the parade ring and out the back. The result is that we are better equipped to show not just the racing side but also the front of house that the audience is looking at; they want to see the Royals arriving, for instance.”

Also helping the ITV Racing team “to step things up a bit” are additional rail-cams on top of weighing rooms at multiple sites, as well as extra high-motion cameras and “sometimes just more standard cameras to occupy gaps that will help fill out the story a bit”. The team is also making extensive use of RF technology that enables more coverage to be based out of the parade ring: “Coming from working on football coverage there was always a desire for operations to be pitched in the heart of the action [in that sport], so the reasoning was: Why can’t we do that in horse racing too? Everyone goes to the parade ring to look at the horses, so it was fairly evident that we needed to be there too.”

Not surprisingly there was some concern from the British Horse Racing Authority about more activity taking place in that area “and whether it would be mean lots of cables, but obviously using RF technology has allowed us to avoid that scenario.” Overall, McNamara believes the reliance on RF has contributed significantly to the dynamic of the coverage, enabling us to “hot-foot it from here to there for interviews and so on.”

McNamara acknowledges the contribution made by service and technology partners including OB provider NEP and live drone filming specialist BATCAM in the success of ITV Racing to date, but confirms it’s very much a work in progress. Meetings are held every week to review the content and discuss possible improvements and enhancements – “the coverage is constantly developing” – but there’s no denying the arduous nature of a schedule in which you are generally “six days from the next live programme all the time. It is a relentless schedule, and within that you need to find time to think and innovate. But I do feel that we have moved forward all the time since we started in 2017.”

Next up on the agenda is Royal Ascot, which runs from 19-23 June. Perceived as the pinnacle of the British Flat season, it is expected to attract more than 300,000 people across the five days, including the Queen and other members of the Royal Family. “It’s definitely a big one for us,” confirms McNamara. “We’ll be on air for 4.5 hrs per day, plus it’s a vast site to cover – one that of course has its own beauty and charm, as well as its own challenges.”