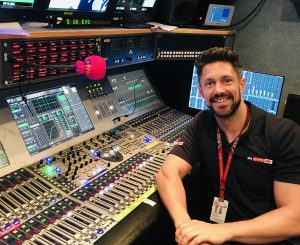 Despite being behind the broadcast audio desk for many of the world’s leading sports events over the past 20 years, sound supervisor Pete Mercer readily admits that it was never his intention to become a sound mixer for TV.

“I wanted to be a guitarist and work in music as a recording engineer,” he says. But circumstances and a realisation about the sometimes dispiriting nature of working with bands contrived to set him on a different course.

Mercer – who joined the final panel at SVG Europe’s Next Generation Audio Summit in London on 31 October to discuss his thoughts regarding the outlook for next-generation audio (NGA) in sports broadcasting and beyond – indicates that several decisive phases in his life and career have been more the result of a happy accident than careful planning.

“Although it had never been my intention I ended up taking a Music Technology degree at Leeds College of Music after finding a last minute place there,” he recalls.

“To make a bit of money and to get some additional education I worked in local studios during the summer. I soon came to realise that it often entailed 14-hour days working with very bad musicians and cabaret acts – to the extent that when I got home I just wanted silence! It was taking the fun [out of being involved in music] so once I completed my degree I began to look at other options. I picked up some work experience at BBC Radio Manchester and with local TV stations, then began applying for radio and TV jobs.”

In some senses, admits Mercer, it has been an “unusual career path. A lot of people in this area have gone on an ITV or BBC training scheme first, or maybe worked on a regional channel for a period. But I didn’t have any of that to work from.” However, he was able to benefit from “some really great sound supervisors and engineers who were happy to share their knowledge and help educate me in the finer points of TV production that still inform my work today.”

Demonstrating a willingness to serve in a variety of audio-related roles – sound guarantee, assistant and principal mix engineer – Mercer ultimately pitched up at IMG, where he was on-staff until 2000, when redundancy prompted the move to go freelance. “I was very fortunate at that point to be friendly with a group of freelancers who invited me to be involved with some tennis coverage for a foreign broadcaster,” he recalls. “Over time I was able to build up experience on the small OB side – my previous work having been entirely studio-based.”

Ensuing work on horse-racing for Racing UK was also instructive, says Mercer, because “if you underestimate the job it always bites you! There are presenters everywhere – in the paddocks, the betting area, etc – and so you have to plan ahead. If the cameras pick up the presenter mics you can potentially have the same presenter on your sound desk five times, so there are a lot of moving parts to consider.” 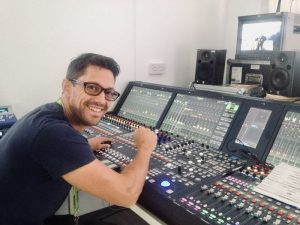 When it comes to mixing demanding productions, “attitude is everything, really,” says Pete Mercer

Although he has worked in multiple audio roles over the years, Mercer says that he “always gravitated towards the mixing console” and was therefore “relatively sure that that is where I would end up because it felt more comfortable”.

Working on the London 2012 Olympics, celebrated mix engineer Felix Krückels – who provided the Keynote for the recent Next Generation Summit, an account of which can be found here) – provided him with some valuable career advice, noting that for example “if you want to be more of a guarantee engineer it might be wise to stop assisting. It helps people to know in their minds what you are, [and defining your preferred role] can you also be beneficial in suggesting that you will be available to take on a project.”

Consequently, around 2012, “I made the very conscious decision to focus on mixing”, and with the ensuing steady stream of high-profile projects in different sports – including at the 2018 FIFA World Cup, where he worked alongside Krückels – it has proven to be an astute move.

Like many of the speakers at the Next Generation Audio Summit, Mercer thinks that it will “take a few years yet” for immersive audio production to become more commonplace. His experience at the World Cup earlier this year was “hugely useful”, but he expects NGA production to be taking up more of his time from 2020 onwards: “I am in talks about doing work for some events that year [that could involve NGA].”

With the need to support an increasing number of formats, and deliver to a growing array of platforms, the casual observer would be forgiven for thinking that the job of the mix engineer is set to become substantially more stressful. But Mercer doesn’t seem too concerned: “I don’t think it will be horrendously different. Attitude is everything, really. Of course, you do have to be prepared and keep your mindset on the main focus, which is stereo, 5.1 and then immersive. There will be a need to check your settings more carefully, perhaps, but as long as you plan everything methodically you should be fine.

“Part of the secret of the job is being ready and able to adapt, and working with immersive audio is no exception.”