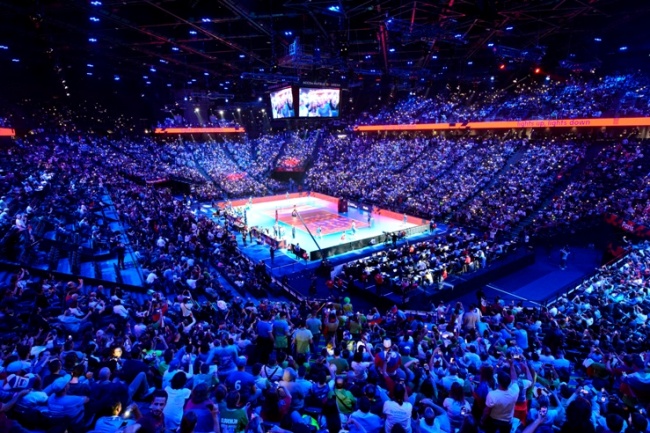 Commissioned by L’Equipe TV, the project was exceptionally difficult from a technical perspective in terms of the traditional XD Motion X fly 3D set up, the company stated. This is because the Federation’s specification of the minimum height the system could fly across the arena at was at odds with the fixed height of the venue’s central scoreboard.

XD Motion’s CEO, Benoit Dentan, explained: “This challenging specification meant that we only had a one-metre clearance for the system to work in, and we only managed to achieve this job through our lengthy rigging experience and bespoke safety software.”

The X fly 3D was one of 14 cameras used by host broadcaster L’Equipe to produce the TV signal from the last three games in Paris.

On the La Chaine L’Equipe channel alone, the Serbia versus France semi-final attracted 1.7m TV spectators, with a peak of 2.1m, a historic record for the channel for a live transmission of any sport. 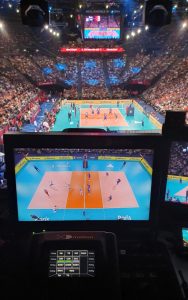 He continued: “This event was the first-ever time on EuroVolley that a 3D cablecam had been used and it was fantastic that both the client and venue were very keen to feedback to XD Motion how they were delighted with the project.”

More than 400,000 unique users in over 700 thousand sessions enjoyed the coverage of EuroVolley via the official event website at eurovolley.cev.eu.

CEV EuroVolley 2019 Men tournament, which took place in four different countries for the first time in its history, came to an end last Sunday in Paris with Serbia celebrating its third continental crown. The final round of matches that took place in France, Slovenia, Belgium and the Netherlands had a total of over a quarter of a million spectators in attendance. This is around 33,000 more than at the previous record-breaking edition of EuroVolley in Poland two years ago. 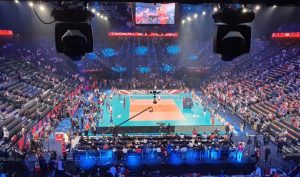 Among the most attended matches were the two semi-finals, which took place in two different countries, France and Slovenia, with the participation of the two host teams.

EuroVolley 2019 also enjoyed impressive TV coverage across the globe. For the semi-finals and the final, it spanned 153 countries, among which 107 TV markets showing the matches live or delayed.

For the final weekend in Paris, fans enjoyed video mapping, connected with the LED boards and cube screens above the court, pyrotechnics from the roof and the floor during team announcements and trophy presentation, a special players’ entrance between giant vertical LED boards, and 50kg of confetti dropped as the trophy was handed over to the champions.