Live at Wimbledon: Inside the new press conference room 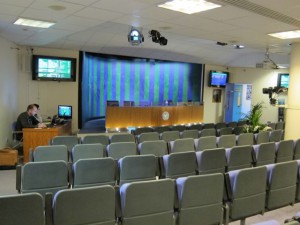 A technical revamp to the Wimbledon press conference room, courtesy of SIS Live and RG Sound Engineering, has resulted in an improved look, next-generation operations, and the ability to make the job of being a reporter and interviewee easier.

“We had a room for about 10 years that had older camera mounts and mics that were on fishing rods on each side of the room [so they could reach reporters around the room,” says Roger Neal, who helped oversee the project for All England Lawn Tennis Club. “But now we have smaller cameras on much more modern ACS Smarthead mounts.”

Lite Panels LED lighting as also been installed in the main room while a second room still has tungsten lighting and a third studio used by the BBC for one-on-one interviews has Kino Flo lighting.

“We use a one-eighth orange filter and some diffuser to get the color temperature to an acceptable color temperature that is down towards tungsten levels,” he says. “With full orange we would lose a huge percentage of the light and they would look awful.” 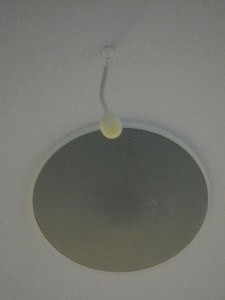 New mics installed in the ceiling are controlled via a touchscreen.

RJ Jones aided with the audio needs, installing suspended cardioid microphones in the room that, coupled with a touchscreen controller on stage, allow for mics nearest the questioner to be activated.

“We improved the look of the room so we don’t have cables or students running around,” adds Neal. “It looks smarter.”

All of the interview areas feed signals into a main control room that has a Panasonic vision mixer and remote control of the cameras.  Two cameras are in the main room with one in both interview room 2 and the BBC studio. All sound is embedded and Sony HDCAM decks are on hand for local recording. The signals also go through to IMG and the central control room at Wimbledon.