Formula 1 has reported that its first foray into e-sports has been such a success, it is embarking on a full-year, two season e-sport championship in 2018. Formula 1 announced its initial season of the 2017 F1 ESports Series in August last year, and was surprised by the immediate reaction, said Julian Tan, head of digital growth and e-sports, speaking at Mobile World Congress.

Tan commented: “E-sports is a key lever here at Formula 1 to grow our fanbase and secure the future of F1 fans and fandom.” 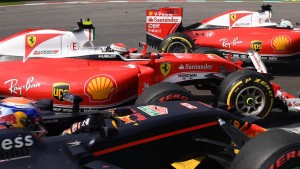 On why Formula 1 is getting into e-sports now, he noted: “This is a booming industry. We want to tap into this audience, and we want to get in early to help shape the industry as it grows and moves forward.”

Tan quoted numerous figures to show the size of the rapidly growing e-sports market, with a 385 million-strong audience globally worth $700 million annually, and one billion hours of e-sports watched in 2016. The e-sports market is predicted to grow to a global audience of 600 million, worth $1.5 billion in market value by 2020. Of today’s e-sports fans, 78% are 13 to 34 years old, and 85% are college educated, and it is that young, digitally-aware group of people that Formula 1 wants to tap into through its involvement with e-sports, said Tan.

Tan said that part of the first season of the 2017 F1 ESports Series was experimental, to test formats to work out what direction worked best; either a pure e-sports trajectory, or to attempt to tie it more into the F1 brand.  Also, to see how existing Formula 1 fans reacted.

Fans old and new reacted well, said Tan. Altogether 63,000 gamers took part in the first season. The top 40 of that 63,000 were identified through online qualifiers and were flown to London for the live semi finals, which were set at the Gfinity Arena in London. In a series of races around the Silverstone and Interlagos circuits, points were scored in the traditional 25-18-25-12-etc format used in Formula 1. Each race took approximately 30 minutes and was based on 25% of the length of a ‘real’ race. Additionally, all the cars were equalised, meaning the skill of the drivers came to the fore,

Tan commented: “The live semi finals were broadcast on Facebook and Twitch; it was the most-watched e-sport event of 2017.”

The top five scorers in each group (20 in total) then progressed to the Grand Final, which took place over two days in the run up to the 2017 Formula 1 Etihad Airways Abu Dhabi Grand Prix. “We took part of the grand final into the paddock,” added Tan. “One garage was turned into an e-sports arena. The final was broadcast live on Twitch and Facebook again, and we had 20 million social media impressions alone.”

As a result, Formula 1 is ready to move ahead on the new 2018 season. “We have big plans to accelerate in e-sports,” stated Tan. “This will be a year-long, two season format. One thing we will make sure we will incorporate is mass participation; we are building on the future fanbase for Formula 1, and we want to be able to grow this asset.”

He also said Formula 1 wants to make sure it partners with the right media partners and sponsors to grow its move into this area in a sustainable way. It wants to make the winners of the competitions into stars in their own rights, like the drivers of real race cars are today.

Additionally, it intends to get the actual Formula 1 teams involved: “We want Formula 1 teams to compete with their own F1 e-sports teams. Barriers to entry will be low; although there will be costs associated, there are many opportunities to commercialise this participation.” Tan said Formula 1 will be announcing more details on which teams are going virtual towards the end of March.

Tan concluded: “This is about making sure the decisions we make to grow this asset bring e-sports to the next level. We want to unleash the greatest virtual racing spectacle on the planet,” he added. “We want to create a unique, strong asset that can sit on its own in formula 1, as well as being part of rhe Formula 1 strategy.”