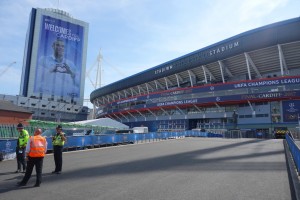 Once again Cristiano Ronaldo was the star of the show, scoring twice at the National Stadium of Wales on Saturday June 3 as Zinedine Zidane’s Real Madrid made it La Duodecima, their twelfth European Cup win. The Spanish kings are the first to retain the trophy in the Champions League era, their third win in four years.

The flagship match was aired in more than 200 countries and reached an estimated 350 million viewers worldwide, with (an anticipated) average live match viewership of 160 million. It was estimated that 170,000 people came to Cardiff to enjoy the match or experience the atmosphere on Saturday. 12,000 accredited staff worked at the event.

The National Stadium of Wales had a 66,000 net capacity for the final, with the retractable roof closed following a decision by the Football Association of Wales taking into consideration recommendations made by the authorities over the last few weeks. 1,800 staff from host broadcaster BT Sport and other UCL UEFA Champions League Broadcast Partners were on-site for the final, with approximately 370 working staff from the Local Organising Committee (LOC), UEFA TV Production and T.E.A.M Marketing also on the ground – plus around 1,000 volunteers.

BT Sport’s feed was taken by over 200 UEFA Broadcast Partners worldwide. For the host production, directed by BT Sport’s Jamie Oakford, there were 47 cameras in operation for multilateral coverage, with Spidercam, steadicams, super slow-motion cameras, ultra-motion cameras and a helicopter camera bringing fans closer to the action. 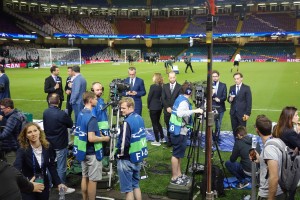 unilateral coverage, using facilities constructed and delivered by the UEFA TV Production team. There were 131 commentary positions in the stadium, as well as 17 pitch-presentation positions, 10 pitch-view studios and 14 flash positions for interviews after the final whistle.

The cameras alone required 25km of cabling. Visiting broadcasters and OB providers set up in the 11,000 square metre TV compound on the pitch of Cardiff Arms Park, home to the Cardiff Blues rugby team, which backs right onto the National Stadium of Wales.

In a major development, virtual reality became an integral part of the overall production operation in the TV compound in Cardiff. Across the past two years, over 50 matches have been covered in 360°, delivering more than 300 hours of live streaming and video clip footage.

In Cardiff, 360° and 180° camera feeds were delivered to the dedicated UEFA virtual reality van for stitching, encoding, live transmission and clipping. A livestream, or near-live clips, were then made available on Livex, UEFA’s content distribution platform.

UEFA and BT Sport deployed 12 cameras for live match coverage, including eleven 360° cameras and one static 180° camera on the gantry. In addition, two ENG cameras covered pre-match, MD-1 and other activities.

With the introduction of a 360° virtual reality live production, broadcasters around the world, including BT Sport, had the opportunity to show audiences the UEFA Champions League final experience. Twelve cameras captured images and audio, allowing viewers using a mobile, tablet or VR headset to feel as though they were in the stadium.

UEFA delivered 360° VR clips of the opening ceremony featuring Black Eyed Peas, players in the tunnel and the winners on the podium for the trophy lift. BT Sport launched a VR experience in the UK for its customers, and Sony, in conjunction with selected UEFA broadcast partners, also developed a Cardiff VR experience for PlayStation.

In addition, audiences were able to watch the match in 360° with UEFA and BT Sport providing a dedicated feed, with graphics and replays, using cameras positioned behind the goals, next to the benches and up in the stands. UEFA’s TV Production team, working with partner BT Sport and supplier deltatre, had tested camera positions and workflows at 16 matches and other UEFA events this season to prepare for the final. 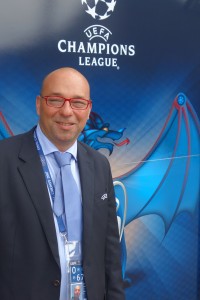 UEFA Senior Digital Broadcasting Manager Olivier Gaches told SVG Europe, “We have twelve 360° cameras, two ENG 360° cameras and one 180° camera. Each of the cameras has eight lenses, stitched together in order to create a panoramic view.

“We’ve put into production these twelve cameras that are going to do live 360°, and out of that we are going to offer five iso 360° streams to broadcast partners plus one curated feed, meaning directed feed, with cuts, graphics, commentator, plus one 180° camera. That will enable them to power their VR strategies. This initiative is from BT Sport and UEFA. We have two UEFA VR units here, powered by deltatre, with BT Sport is directing the curated feed,” said Gaches.

As at all UEFA finals, a number of key TV Production staff were on hand to oversee the multilateral production and manage UEFA’s on-site content and digital requirements – including TV Match Operations Senior Manager Markus Hövel.

Speaking to SVG Europe on Match Day-2 Hövel said, “The outcome here is really positive. We knew the city; we conducted the Super Cup here two years ago in Cardiff City Stadium. We knew there were issues with parking space for trucks – but the LOC offered us Cardiff Arms Park, the smaller stadium next door, for the TV compound, which was a huge help.

“In the past whilst UEFA provided all of the in-stadium TV facilities, broadcasters would still arrive with their own trucks then rig their own cables and set up their own equipment. But with everyone arriving, as you know, on match day-3 and match day-2, the pressure is very intense. It’s a big risk with everyone working at the same time so close to the final itself.

“Now, UEFA centrally coordinates selected services and offers them to broadcasters – including the Technical Operations Centre (TOC), iso feeds, power supply to the compound and to all the other TV positions inside the stadium and pre-cabling using fibre connections within the stadium. So the big broadcast partners who traditionally arrived with a lot of facilities can cut down and use our infrastructure. It makes perfect sense,” said Hövel.

“BT Sport produces the world feed and we deliver the other services and facilities, working with 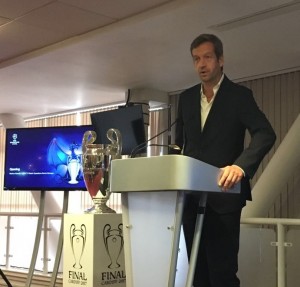 various suppliers. Our provider [Mahlzeit] has upgraded the cabling in the stadium, for example, but we will leave it here afterwards, so the stadium and Football Association of Wales can use it for future matches. Obviously, for UEFA, yes it costs us money to upgrade venues but in the long term we can come back and use the facilities again. And its also UEFA’s role as a federation to continue to work with local football federations to upgrade their facilities and continue to improve the level of service they can offer to all our stakeholders, including broadcasters.

“BT Sport is producing the world feed, HD and 4K. The 4K UHD is a joint production, between UEFA and BT, with director Séan Hughes. It is a separate production probably for the last time, because we will go to a one-truck solution like HBS does for CONCACAF and the World Cup. I think that’s our way forward next year, a one-truck solution with 4K and maybe HDR – not separate productions with separate directors,” he said.

“We haven’t added any new camera systems for the HD coverage this year. For 4K we have 12 dedicated cameras, some of them upgraded. It’s a big 4K camera plan. The world feed production and 4K production are from Telegenic trucks, and the opening ceremony truck, with director Simon Hughes, is Timeline’s UHD1.

“BT Sport decided they would have a separate director; in the past sometimes it was the same regie, i.e. the same truck only with two directors quickly swapping. This time we have two trucks: BT Sport is focusing on the match and the warm-up, and Simon steps in with the other truck for the opening ceremony coverage,” said Hövel.

“For the very first time we have a live virtual reality production here. Last year we experimented with a few cameras, but now we have a 12-camera set-up on pitch level, and along with BT Sport we are producing live VR for the first time. They created their own BT Sport app more or less for this event.

“The curated VR production is for the match of course, and we also have a lot of behind-the-scenes coverage with the VR cameras. We have a remote-controlled car, with a VR camera, which will follow Black Eyed Pies before the opening ceremony through the tunnel until they get to the pitch. We have tested this and it works really well. In the past we have also tried to capture the VR sound from the cameras, but what we are doing here is taking the sound from the world feed production and mixing it – this is also a first.

“For the first time we have also supplied lighting for the pitch-side presentations. In the past we have 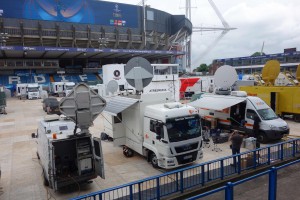 View of trucks parked in the TV Compound on the Cardiff Arms Park pitch, Friday June 2

always asked the broadcasters to bring their own stuff. But it’s a bit like the power supply: there’s a danger there with different equipment and power plugs. We are now providing this centrally, so broadcasters need only bring their cameras and video/audio equipment, and that’s it. This ensures UEFA can offer a robust, safe service of the same high standard to all broadcasters. This really makes a difference to their on-site operations – knowing that power, cabling and lighting are centrally coordinated, which means they can concentrate on their productions.

“In the past the host broadcaster provided the power to all the broadcasters’ OB trucks and we were out of the discussion. But as a football federation if you take over this responsibility, you need to make sure 100% that you’re covered. We have done this now, and we have used expert specialists,” he said.

“One other consideration is that the big clubs now have their own channels, and the pick-up in Spain is huge. Obviously we have Spanish rights holders so [Real Madrid TV] are not allowed to show the live match – but for all the build-up they cover all the press conferences and pre-match coverage, and are pitch-side for the training sessions. But it’s really only the biggest clubs – Real Madrid, Manchester United, Barca TV etc. – that have such a big presence. I remember that in 2009, Barca TV was the first to arrive at the final with an OB van and this year one of the largest trucks is from Real Madrid TV,” said Hövel.