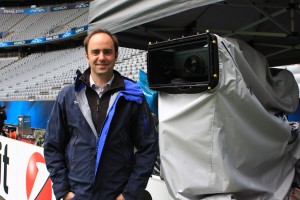 Alessandro Reitano, Sky Deutschland, head of sports production, with one of the 3D camera rigs that will be used for Champions League final tomorrow night.

More than 300 million viewers from 250 countries are expected to tune into the Champions League final tomorrow night as Chelsea Football Club and FC Bayern München face off in Bayern’s home stadium, Allianz Arena in Munich. And for Sky Deutschland, and director Knut Fleischmann, the international stage provides an opportunity to work with 20 international broadcasters on site and provide a viewing experience that reflects the host nation in a positive light.

“The Champions League Final is growing every year and there are always new demands,” says Alessandro Reitano, Sky Deutschland, head of sports production. “The resources needed are enormous and you need six months to plan it.”

Sky Deutschland won a bid to serve as host broadcaster last year with preparations beginning in October. In February those preparations became a 24/7 operation, as the team began working with the Arena, international rights holders, and German OB provider TopVision, which has five OB units on site that will be used for the international feed, a domestic feed, and a 3D feed. Reitano says Sky Deutschland will typically use up to 15 cameras for a top-quality Bundesliga match and that the Champions League group and quarterfinals each had 25 cameras.

“You need experienced companies like TopVision which are familiar with big shows,” says Reitano. “And they are here with 90 people, so their resources are enormous for something like this.” 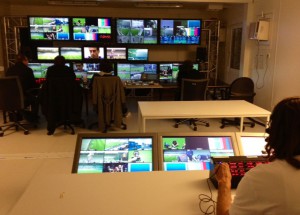 A look inside the main production gallery for the Champions League final. The replay operator (foreground) will be located behind the main gallery and the cabin provides an optimal work environment.

TopVision HD Ü1, HD Ü2, HD Ü4, and are all on hand to help create the 1080i/50 signal. But in a first for a Champions League event, the main production gallery for the game has been moved out of a production unit and into trailer cabin. A technical-operations center is also on hand to allow for broadcasters to receive an SD feed, if desired.

“It’s a similar concept to the World Cup in South Africa because we saw that we needed more space and to fit all of the signal monitoring into one OB unit would be too much,” says Reitano. “So we are bringing the vision monitoring and mixing into a [production cabin].”

The OB units will then be used to produce the pre- and post-game coverage, the 3D production, and the domestic feed for Germany.

The International feed will rely on 42 Sony cameras with Canon glass, including seven super-slow-motion units, a Spidercam, and two Fletcher Hi-Motion II systems. But there will be many more cameras on-site, with the 20 broadcasters on-site bringing in unilateral cameras that will be used for pregame, halftime, and postgame analysis. Other unilateral cameras for the broadcasters will provide their production teams with additional angles for game coverage. Eighteen EVS XT[2] systems will also be in use for building replays from all the camera feeds. 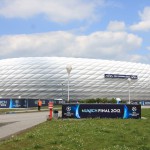 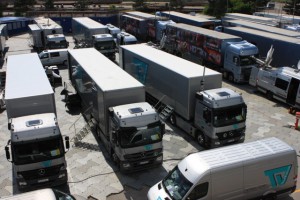 The TopVision fleet will play a key role in the TV production of the Champions League final.

“Knut is cutting for everyone in a way he is very familiar with, as he has worked for HBS [on the World Cup and other events] so he knows how to cut an international feed,” adds Reitano.

Sky Deutschland will also be responsible for the 3D production of the Final and Reitano says the German philosophy to 3D is to rely less on cameras that are only used for 3D and instead synergise the 2D and 3D production as much as possible. Two Steadicam units, for example, will be used for both the 2D and 3D feeds. Also at the disposal of Director Marcus Olschewski will be two 3D cameras in the main camera gantry, a polecam, and two in-goal 3D cameras.

“The German market is totally different from the UK and others, and our viewership is not as big so we are doing more 3D in sports bars,” adds Reitano.