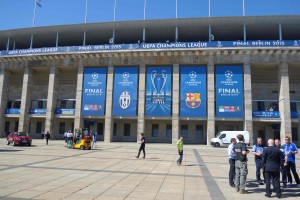 Sky Deutschland used freeD and Ultra HD across the German DFB-Pokal Final and then the Champions League Final over the course of a hectic week at the Olympiastadion in Berlin “to offer some clear differentiation” over other broadcasters, said its director of sports production Alessandro Reitano. Sky Deutschland has now tested Ultra HD a total of eight times over the course of the recent Bundesliga and Champions League seasons and this time broadcast both matches to 13 Sky Sports Bars where it had installed Samsung 65-inch and 78-inch TVs with build-in Ultra HD tuners.

Use of the freeD system was a European first. “Sky Deutschland are basically the innovators who 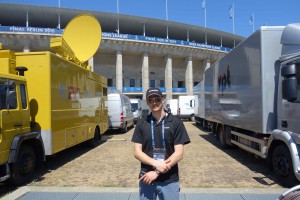 brought us to Europe; we don’t have any other projects in Europe right now,” said Aviv Shapira, chief operating officer of Replay Technologies, the company behind freeD. “We have projects in Brazil (a permanent installation in the Maracana with TV Globo), Korea and the United States, where we have many installations including leagues such as NFL, MLB, NBA and the major broadcasters as well,” said Shapira.

“The guys from Fox told us about a nice system and we saw it for the first time at a [Dallas] Mavericks game,” said Reitano. “It is an expensive, heavy four-week installation and this is the problem; it is a permanent installation. But we spoke with the FreeD guys and asked if there was any opportunity to get this system to Europe and especially to Germany?

“We told them we had two major events in Berlin and we thought OK, this is the right choice. But it is a permanent installation so we have two options: keep it or dismantle everything and ship it back to Israel!” he said.

“Normally one clip takes 90 seconds, from in and out to rendering the whole thing and to bring it on air. We’re constantly producing clips, maybe 50-60 per game, but we only use about six per match on air. Our producer in the FreeD container makes the decision on what to use,” said Reitano.

Replay Technologies’ Matteo Shapiro added, “freeD is a new video format, where instead of shooting one camera with a sensor we’re using multiple sensors essentially as a big three-dimensional scanner. We have 32 cameras around the stadium. The system uses the information from all the cameras to build — instead of pixels we build voxels — which are volumetric pixels. All the different images from the 32 cameras add up to the ‘free dimensional’ database.

“That allows us to take a grab of the action,” said Shapiro. “The system has a cyclic buffer which is always recording and when we say ‘mark’ we can record backwards any interesting action and then, it’s split into two parts. There’s an operator station where we can choose specific moments, and the other part is what we call the navigation. During the game, they can look at all the cameras and make sure in terms of lighting we have algorithms that compensate between all the different cameras and that the operator station is capable of working smoothly.

“The operator picks a piece of action and then uses the interface to create a virtual camera shot. The options are limitless – we can go from the goalie’s perspective or any player’s perspective in complete three-dimensional space to create any viewing angle. Essentially it’s like a 3D scanner. But we can really do things that are completely unachievable with a physical camera,” said Matteo Shapiro.

“The UEFA guys produce the Ultra HD feed for the Champions League Final,” said Reitano, “with the same set up we used last week at the DFB-Pokal final, where we were the producer. There are 11 native Ultra HD cameras, a parallel independent Ultra HD feed which we take from the TOC and bring it to Munich via fibre and then send it via satellite to the 13 Sky Sports Bars where we have installed Samsung screens. We do the encoding in Munich in 35 MBit out to the Sky Sports Bars,” he said. 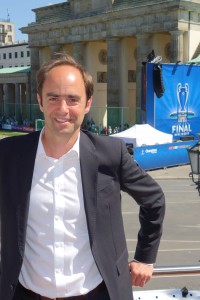 Alessandro Reitano: “I think the new [Sony HDC-4300] camera is really a game-changer”

“They are using four new Sony HDC-4300 cameras and some prototype box lenses from Canon and Fujinon. I think the new camera is really a game-changer,” said Reitano. “Out of this camera you can have both HD and Ultra HD and you can have six speed or eight speed – this is really a game changer from my perspective. With the right lenses it is a very good product because at the end of the day you have to come to the situation of no more parallel productions, like we had with 3D. That was a disaster, economically. You can have one Ultra HD production and then you strip it down,” he said.

“The feedback from last week in the Sky Sports Bars was very positive, especially when you used an upconverted HD signal in the Ultra HD feed – you could see the difference immediately. The feedback was ‘wow, we can really see the difference’, even on the 65-inch screen. Everyone was happy,” said Reitano.