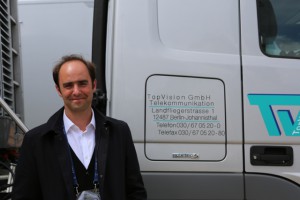 Alessandro Reitano, head of sports production for Sky Deutschland, says a new Champions League studio made its debut for the final.

Sky Deutschland was at London’s Wembley Stadium in force for the Champions League Final between Bayern Munich and Dortmund, an exciting match that went down to the final minute ensuring that fans of both teams were tuned in for every minute.

Sky Deutschland and Spy Sport News had a team of 70 on hand for the first Champions League Final in history to feature two German clubs facing off against each other. The German pay-TV service made the most of the opportunity with a number of features, including the debut of a new Champions League set that will be in use for all of next season.

“The original plan was not to open it for the final,” says Alessandro Reitano, Sky Deutschland, head of sports production, but the presence of the two German clubs provided the perfect reason to open it up earlier than planned.

The studio was in use the morning of the match for a pre-game show from 1100-1230 and also in the evening of the match. Earlier in the week it was Sky Sports News who was at the center of the Champions League buildup.

“Sky Sports News has been covering every step the German teams takes in London and Sports Talk in the morning has been broadcasting from the stadium,” says Reitano.

Not only was there a larger amount of pre-game programming than usual but there was also a multi-feed of four sub-channels with channels dedicated to each team, another with highlights, and a fourth with match data. Those channels were each produced in Munich as Vizrt graphics gear in the Sky Deutschland production center play a big part in the final on-air look. 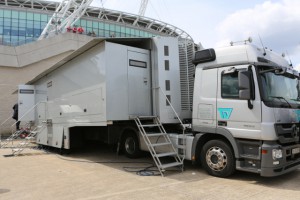 TopVision OB5 was on hand for the Champions League Final at Wembley Stadium.

TopVision’s OB5 unit, which hit the road only eight months ago, was on hand for the production at Wembley. Among the kit inside the OB unit is a Sony MVS-8000A vision mixer, Canon lenses, EVS XT2 replay servers, GVG Trinix router, a Riedel Artist intercom, and a Stagetec audio board. During the match Sky had 10 of its own Sony cameras with Canon lenses in use for unilateral feeds as well as an additional 8-10 feeds from the host broadcast. Those feeds were all used for highlights creation as well as the sub-channels. There was also a pitch view studio, an indoor studio, and a pitch presentation platform that were all integrated into the match broadcast.

And while Champions League caps off the season for many leagues and teams there is still one more match, the DFP Cup in Berlin next week, for the team at Sky Deutschland to produce. And the second division of Bundesliga starts in the middle of July so next season is already quickly approaching.

“We have some ideas,” says Reitano of next season. Look for more on those developments in the coming weeks.