Like every other sports federation or broadcaster UEFA is investigating how best to keep fans tuned in to its broadcasts in an era when second screen devices can often have TV viewers turning their attention elsewhere. And this weekend at the Champions League Final the organisation is giving visiting rights holders a chance to experience, and give feedback, to a new second screen experience that it is looking to introduce during the next rights cycle that runs from 2015-2018.

The end goal? To offer Champions League rights holders a new content offering that delivers three or four live camera angles, multi-angle clips of match highlights within seconds of events occurring, synchronised play-by-play data, and team tracking data to tablets, phones, and computers so that fans can have a timely second-screen experience.

The trick, says Olivier Gaches, UEFA, digital media solutions manager, will be to making sure the first and second screen experiences are in sync regardless of whether the viewer is watching the event live or they pause the TV and then start it at a later time. The solution, he says, is to use audio watermarking that triggers events on the second screen based on the audio of the first screen.

The demonstration at the Champions League Final is not tied into the live match on Saturday but is rather a proof-of-concept that will use clips and stats from last year’s final in London between Bayern Munich and Dortmund. Visitors to the UEFA Digital Media Showcase in the compound will be able to experience the service on various devices. 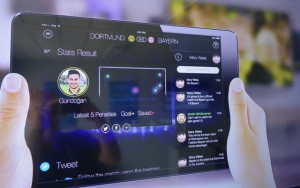 UEFA is demonstrating a second screen application at Champions League that uses audio watermarking to keep the first and second screen experience in sync.

While some of the technical details remain to be worked out the core concept has been finalised. The current plan is for the TV graphics van that is currently deployed at Champions League matches to evolve into a multiservice van. That van will take in upwards of 12-16 camera signals as well as an audio feed from the host broadcast truck.

The broadcast signal enters the van and passes through an audio watermarking system that inserts audio time stamps and a match ID into audio channels seven and eight. That signal then returns to the host broadcast truck for transmission while, simultaneously, the multi-service van will send video and graphics files to the Content Factory where they will be married up with the proper time stamps in the broadcast signal. When a TV viewer plays back the content, either live or even on demand, the audio cues trigger the appropriate event, whether it be multi-camera replays, statistics, highlights, interactive contests, polls, advertisements, and much more.

“This is a showcase to get feedback from the broadcasters,” adds Gaches.