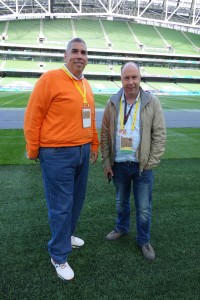 ESPN rolled out a major slate of college-football games this Labor Day Weekend past, led by seven marquee games in three days. The weekend saw the network broadcast more than 45 games across eight platforms for a total of 100 consecutive hours of college-football in Week 1 of the new US college football season.

Week 1 saw games played in six NFL stadiums, 22 states and three countries – the United States, Australia (for the season-opener between California and Hawaii at Sydney’s Olympic Stadium, in cooperation with Fox Sports) and at the Aviva Stadium in Ireland for the Atlantic Coast Conference (ACC) matchup between Boston College and Georgia Tech.

Speaking to SVG Europe before kick-off in Dublin John LaChance, director, remote production operations, ESPN said, “first off it’s a great experience to be part of this. What a great way to kick off ESPN’s opening weekend – from Dublin! This is our second time here; we were first at Croke Park [home of Gaelic Games] two years ago.

“It’s a nice blending of two great production traditions – working with NEP Ireland and all their professionalism has been great. We’ve learned a lot and have tried to let them be part of American college football. This is just a nice way to kick it off, so the folks back in the States can enjoy a little of the colour and pageantry of the game being played here in Ireland.

“We’ve got a crew of about 30 people both from the United States and the UK; it was easier to bring the Chapman sideline camera vehicle from the UK for instance. We’ve brought five seasoned college football camera operators, plus two EVS replay operators and one A1, to work with the local team. This sport is unique and has a lot of different movements and rules: we needed some specialists here. It’s a 12-camera show, plus three more for the in-house production. It has worked out so well; we couldn’t be more pleased,” said LaChance.

NEP Ireland managing director Alan Burns takes up the story: “Our relationship with ESPN on college football started before we became part of NEP. We did the last game in Croke Park two years ago, and it’s much easier now because everyone at ESPN knows NEP and we’re part of the family. ESPN are the only broadcaster here; there is no domestic broadcast of this game.”

“Pitch-side you have the classic Chapman Crane for American Football. Instead of the Camera 3 that we would have on the plate, this goes up and down the sideline, following the line of scrimmage.

“The scoring in the stadium is displayed on Daktronics systems, and the screens are now running in American Football mode – the software, the screening, clocks, game plays – everything is different to the way a system would run for rugby or football. Both here and Croke Park now have the same system which they can work across, rugby, football, Gaelic Games and American Football.”

From Tour de France to Belgian Football and on to Dublin

“Our new Spirit UHD truck did the Tour de France for NBC,” said Burns. “We finished this truck on 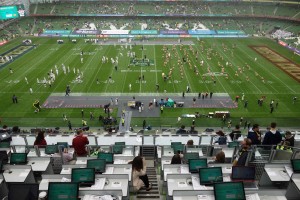 26 June; we packed it up and went on the Tour. We did 23 days on the Tour, came back and reconfigured it and did the Belgian Football League for the month of August, three matches a weekend — as the Belgian NEP trucks were down in Rio doing the Opening and Closing ceremonies. We filled in, in Belgium, while those trucks were in Rio. It came back to us this Tuesday – the first time we’ve seen it in Ireland. And it had done 40 days production since we finished building it!

“There’s a SAM 4K vision mixer on board – first time in 15 years we’ve bought a mixer that wasn’t a Sony. We’ve Telex Omneo comms and VSM control. This is the first truck of any of the NEP UK and Ireland companies to go with VSM control. We’re using an Imagine Communications IP3 router here, also the first time we’ve gone to Imagine. The difference with Imagine is it has all the VIPS, crosspoints, synchronisers and multiviewers in one frame; you don’t have to have external stuff so it’s more compact. We’re able to bring the patch down to virtually nothing.

“But we wanted a control system that would sit on top. One of the great things about VSM is that they’ve embraced Calrec: even though it’s not a Lawo [the company that owns VSM], the VSM team has gone out of their way to make sure the interface to Calrec Artemis is as good as to Lawo. It all works brilliantly.

“With a lot of the audio now we’ve gone to Dante. All our pre-listens and a lot of the interface from the spot-on has gone to Dante, which has reduced cabling and is more flexible and more efficient. You can control it all with the software, along with the new generation of Telex Omneo. This is a pretty powerful audio environment.

“We use SAM UHD to HD downconverters – they’re the holy grail. We went with SAM because of their expertise with Alchemists and conversion of signals. We felt they would put more R&D into this. And obviously with the Kahuna mixer being in UHD, it was a new relationship and we were happy to go with them.

“We didn’t want an artic truck,” said Burns, “so this is the same footprint as the truck that we lost in the fire [at NEP UK’s headquarters building in Bracknell last November]. We wanted the same quick in-and-out: on the Tour de France we had 15 minutes to open this truck and one hour to rig it every morning, ready for transmission. The big artics take too long to open, so this was perfect.

“We also have two separate satellite links, main and backup. We’ve just upgraded the uplink truck to Ateme 4K kit. We have three duals, a single with modulator, two extra modulators and five receivers. This is our first 4K upgrade with Ateme. We think the GUI and interface of the Ateme is much more user-friendly than others,” he said.

“With Pacific, Spirit and Aurora all being 4K trucks, we also wanted to have the capability to uplink from our own trucks. That’s why we’ve gone with this 4K investment. The great thing about Ateme is we can also use it in HD. Today is an HD transmission, but we have the latest encoding and the latest chips to help with that transmission,” said Burns.

“And the thing with 4K is, we’re back to big bandwidths on the satellites, so we need big dishes and big amplifiers. You’re not going to do this stuff on the top of a Jeep. Forget about Ka band and all that lightweight technology; you’re now back to the boys with the big trucks and the big antennas. And when you start putting up multiple feeds like a clean, a dirty and a different language graphic feed, you’re really hacking out the bandwidth. From my point of view this is NEP investing in 4K — not just in OB trucks but also in links capability.”

DV Sport is the current provider of HD Instant Replay for NCAA college football for a number of conferences including the ACC, which is headquartered in Greensboro, North Carolina. DV Sport president Brian Lowe was on hand with his team in Dublin to ensure a smooth transition across the Atlantic Ocean, and to deliver an IP first for college football as well.

“From an instant replay standpoint, we bring in our feeds from the truck. We’ve got four feeds 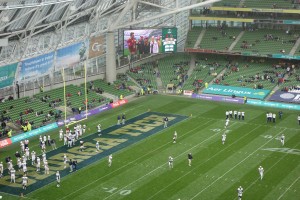 coming in to us in realtime; the programme feed, and isolation cameras – high end-zone, low end-zone and a handheld,” he said. “This allows us on every play to quickly watch the feeds and as soon as the play is over the official can grab these feeds and start watching them. The goal is to try to make a determination whether we should stop the game or not if there’s something like a turnover for which you might stop the game for review.

“We’re trying to make that determination before the next snap, so we’ve a finite amount of time to do it,” said Lowe. “All these screens are tied together in sync, and then we have all the data that goes with the plays. As the game goes on, with over one hundred plays, we’ll have every play catalogued and we can jump back and recall something if an official wants to see it.

“We have communication with the field through our headsets,” said Lowe, “and brand new this season we’re actually connected back to Greensboro North Carolina, and they will be seeing the same things we’re seeing here. We’re transmitting the signal to Greensboro over the internet — not only video signals but also comms so we’re talking to them in realtime.

“At the command centre in Greensboro they have seven replay systems. We’re now linked to them from the field, so that when the referee comes over and puts on the headset, he can actually talk to Greensboro. It’s the first time we’re doing this overseas.

“We did games last night [opening night of the season] back in the States using this new talkback approach, which has been brought in by the ACC and SEC Conferences this season. The head of officials is back there: he’s making sure that nothing is missed or overlooked.

“And the fans in the stadium can also see what’s going on, via the jumbo screens in the stadium – they can now see the same thing. Everybody gets to see if that foot touched the line or the ball was dropped. While the officials are making the decisions in realtime, everybody else is watching over their shoulders,” said Lowe. 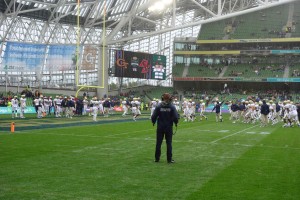 “We rely on the truck to feed us; those fibre feeds in the wall right there are from the truck match cameras, and we have to do a conversion here as this is a 60 system and we’re shooting in 50, through a Decimator system. This allows us to convert the signal from 50 to 60, and then we feed them 720 back.

“We also have a medical observer in this booth, and he has instant access to all this information as well. He can pull up anything we’re doing independently, on his screen, using our sources. He has comms for each team, with two channels, so he can say ‘Hey, number 89 needs to come out.’

“And for the first time this year, we can actually stop the game and make that happen. If we need to stop the game, we can buzz the officials on the field who will come over to the headset and [the medical observer] will say ‘Hey, number 89 needs to come out right now’,” said Lowe.