On June 27 Italy defeated Spain 2-0 in a gripping Round of 16 encounter at Stade de France in Saint-Denis. Before the match, Tom Hawkins, UEFA’s TV Match Operations Information Specialist, showed SVG Europe around the TV compound and pitch-side set-up.

Standing in the TV compound area outside the stadium, Hawkins said, ““UEFA Host Broadcast (HB) is delivering the multilateral and unilateral coverage of UEFA EURO 2016 using two OB trucks at each venue – one for the multilateral coverage and one for the FANtertainment coverage. However, the production team responsible work and travel between two venues. At the Parc des Princes and Saint-Denis we use Euromedia trucks, but the set-up is the same across the ten venues of EURO 2016, though we use different truck providers. Therefore, one director also covers two venues.

“The main multilateral production truck is here, and behind it is the FANtertainment truck, which is a separate production. That truck covers match day-1 – including the training sessions & press conferences — then on match day it does the giant screen production as well as the fully equipped unilateral services. It also acts as backup to the main multilateral truck.

“Next to the multilateral truck is a third vehicle for the super slo mo,” said Hawkins. “We have two high speed and eight super slo [Digital Video Sud] at every stadium, which provide incredible super slow motion images from the game. 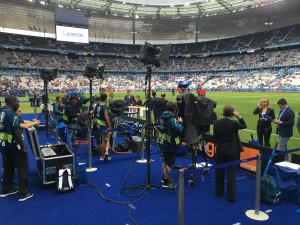 “It’s the same for the EVS facility: we have so many EVS on-site we need a separate facility underneath the HB offices within the stadium TV compound. Some of the EVSs are in the multilateral truck, but the majority are actually in a separate container facility.

“We also have our HB management team and venue liaison team there. At the Stade de France we have two separate TV compounds – one outside the stadium for the multilateral production, and one inside for visiting broadcasters. It’s not an ideal situation but EURO demands are obviously much bigger than Champions League. We have to work with what we have on-site,” he said.

“If you’re a visiting broadcaster you come to the Cable Interconnection Room (CIR) where you can connect into the facility and can take the 16 match feeds – plus the dedicated VIP feed, only available at the venue – for distribution via your on-site SNG. The 16 feeds are also routed from the CIR back to the International Broadcast Centre (IBC) located in Porte de Versailles, Paris. Various stadiums are now finishing as the tournament progresses: as we speak we’ve already closed Lens, Paris and St-Etienne and they’re in the process of de-rigging now.

“Next is the Technical Operations Centre (TOC), which is the hub where all content exits the stadium. At the stadium the TOC acts as the local Master Control Room (MCR) with the CIR the stadium demarcation point for telecoms and cabling. Visiting broadcasters are also served by the Broadcaster Liaison team located at the unilateral compound,” said Hawkins.

UEFA supplier Gearhouse Broadcast has delivered the TOC and CIR at Saint-Denis (and each of the ten venues for the tournament). At each TOC, Gearhouse installed around 10km of fibre cable. Each TOC is responsible for distribution of the live stadium (world) feed from each venue to the IBC at Porte de Versailles. The venue TOC also passes the feed to the nearby CIR where it is distributed direct to UEFA Broadcast Partners with an on-venue unilateral presence.

Gearhouse also provided the special cameras and EVS slow-motion operations facility at each venue. The stadium special cameras facility is responsible for receiving feeds from the UEFA helicopter camera, in-goal cameras, handheld radio frequency cameras and the stadium beauty shots. Those feeds are racked and then distributed to UEFA’s multilateral and FANtertainment OB vans. That space also supplies all of the racks and monitoring for the on-site EVS replay area that houses all of the XT servers used for the live production.

“We’re also doing a 4K test production here today,” said Hawkins, “bringing four cameras back to the IBC routed through the Cable Interconnection Room purely for internal UEFA testing purposes. John Watts will then direct the match live at the IBC today, with our dedicated 4K commentators located in the stadium. These tests provide an invaluable opportunity for UEFA to review new production technology, and our workflows, ahead of the incredible project that will be EURO 2020.”