Live from Munich 2022: Inside the European Championships with EMG 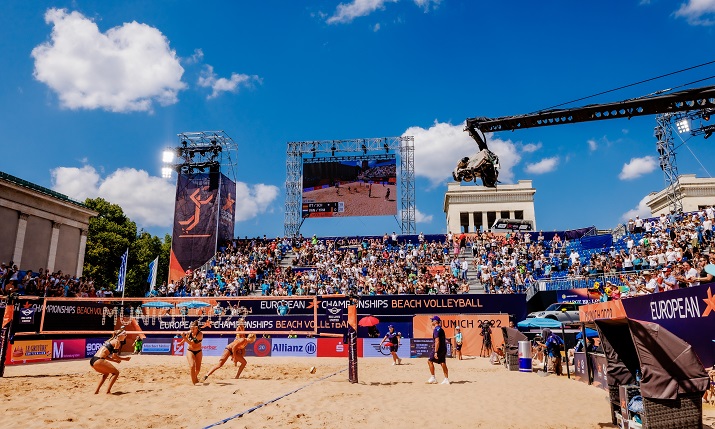 With the temperature in Munich in the mid-30 degrees centigrade, a hosepipe is being used to douse the spectators packed into Königsplatz for the final of the women’s bouldering. Despite the heat, the climbers continue to pick their way across the bouldering wall, while on the other side of the square in front of stands packed with more spectators, preliminary men’s and women’s beach volleyball matches are taking place.

Both sports are part of the nine Olympic events that make up the 2022 European Championships, which brings together the existing championships of some of the continent’s leading sports into one event and also features canoeing, cycling, gymnastics, rowing, table tennis, triathlon and a host of athletics disciplines.

The 11-day European Championships is the biggest multi-sport event to take place in Germany since the 1972 Summer Olympics. EMG is working directly with Munich 2022 local organising committee (LOC) to provide production facilities in support of the LOC’s host broadcast plans, which include more than 400 hours of live production captured from 12 competition venues. The European Broadcasting Union (EBU), which represents Europe’s free-to-air channels, is the official broadcast partner of the European Championships, with 40 of its free-to-air broadcaster members providing live programming and highlights on more than 50 channels.

“One of the advantages of this project is the very short lines between content and engineering. If there are any issues, they can be reported and resolved so quickly.”

Given the scale of the event, EMG has drafted in trucks, kit and crew from its divisions across Europe, which include Germany, the Netherlands, Belgium France and the UK. Spearheading the operation for EMG is head of international projects and sales Chris Demeulemeester, who led EMG’s bid and is on site in Munich along with some 285 EMG colleagues.

One of the main differences to other multi-sport events is the organisational structure; instead of working to a production company, EMG’s client is the LOC, a group set up by the European Championships Management Sàrl (ECM), the organisation that founded the European Championships and which manages and coordinates the event in cooperation with the participating federations and the city of Munich. 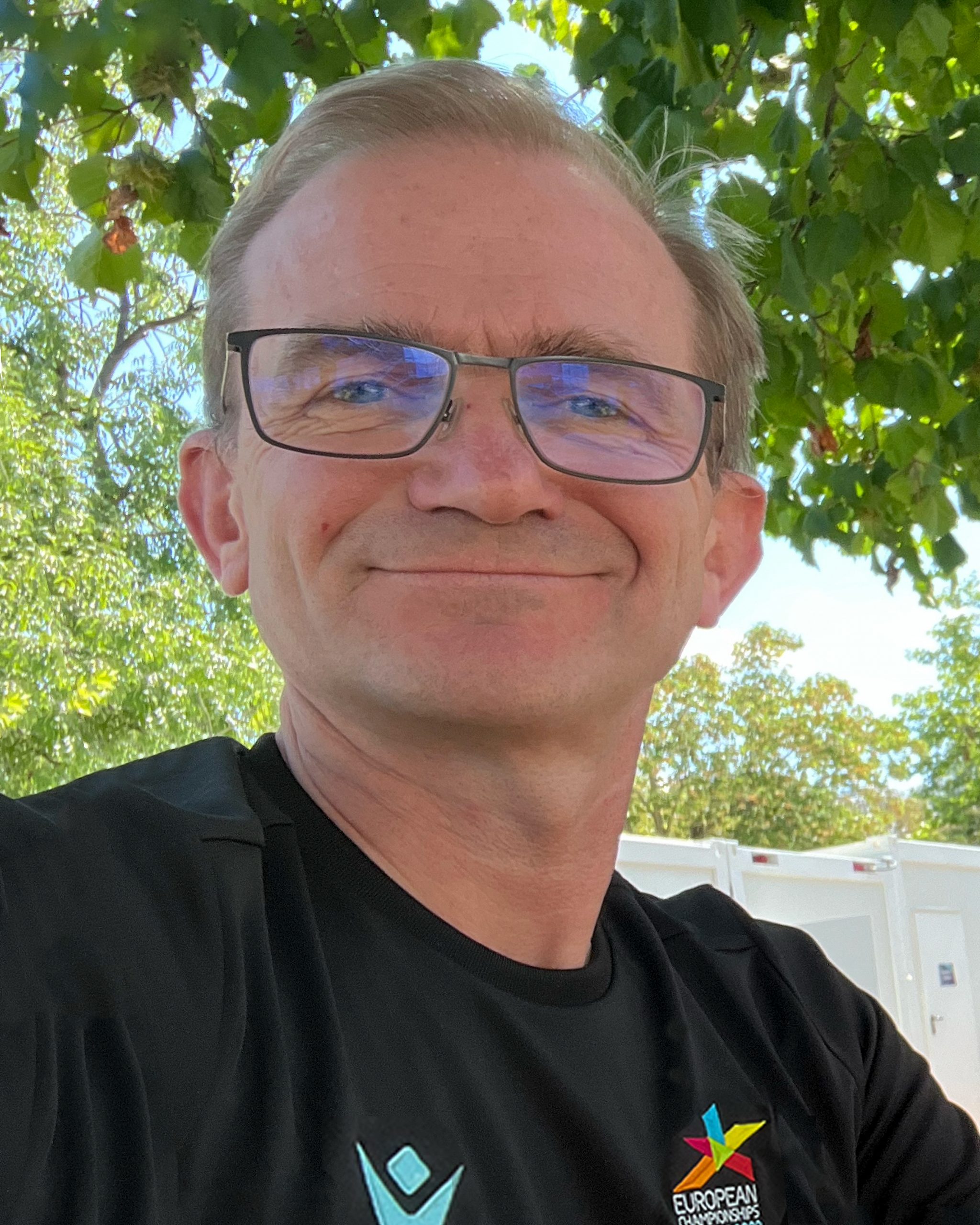 While EMG has been tasked with providing technical and production facilities at the Olympiapark including galleries, OBs at the venues around Munich, RF provision and asset management, the LOC is responsible for editorial, for example hiring the directors and camera people under the direction of head of production Joris Wauman.

Demeulemeester (pictured, left) is also working closely with engineers Norbert Garske and Gerd Kaiser, and he credits the “flat” organisational setup as being a major benefit of working directly with the LOC. “One of the advantages of this project is the very short lines between content and engineering,” says Demeulemeester. “If there are any issues, they can be reported and resolved so quickly.”

For Demeulemeester, another of the standout aspects of the Championships has been the level of detail for both the tender and the planning of the project, with Demeulemeester describing the RFP as one of the most thorough and comprehensive he has ever been involved in.

“I have also never received such a precise production plan in my entire career,” he tells SVG from the IBC at the Olympiapark. “The preparation level done by Norbert and Gert, who are the lead engineers on behalf of the LOC, was at an extremely high level. A year and a half before the Championships I already had the entire layouts and camera plans; the level of preparation was extraordinary.”

At the heart of the Olympiapark is the Olympiastadion, the striking stadium that was built for the 1972 Summer Games that is being used as the main venue for the athletics (the motto of Munich 2022 is ‘Back to the Roofs’, a reference to the return to the site of the 1972 Olympics and Munich’s emphasis on financial viability and use of existing facilities and landmarks). Also taking place on the Olympiapark is the freestyle BMX, mountain bike, cross-country and triathlon and gymnastics. 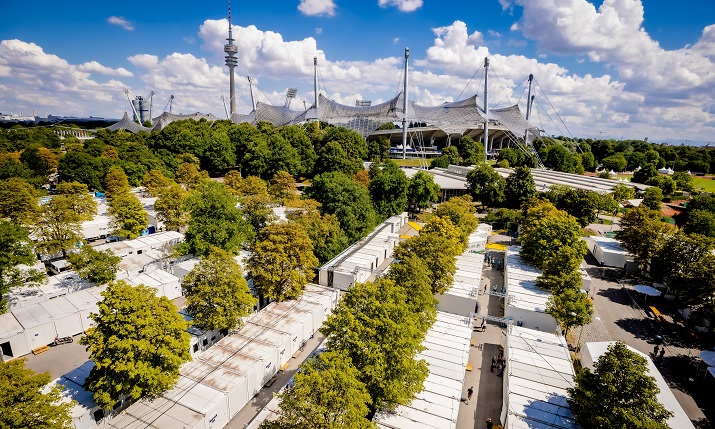 Nestled on the edge of the Olympiapark is the IBC (pictured, above), which is comprised of a series of rows of white containers housing individual galleries for each event along with containers for rights holding broadcasters.

“We don’t have any OB trucks here in the Olympic Park,” says Demeulemeester. “It is all done and run on diPloy, so the entire engine power of 12 OB events are reduced to two data centres, with base station units in the venues in the park.”

IP flypack system diPloy is housed in two shipping containers on the corner of the IBC. Based on Imagine Communications’ Selenio Network Processor platform, EMG built diPloy for the Olympic Games in Tokyo and tested it at the 2021 Fédération Internationale de Ski (FIS) Nordic World Ski Championship where it was used to co-ordinate a remote production, with the ski jumping production team situated a few kilometres away from the camera crew on the competition site. 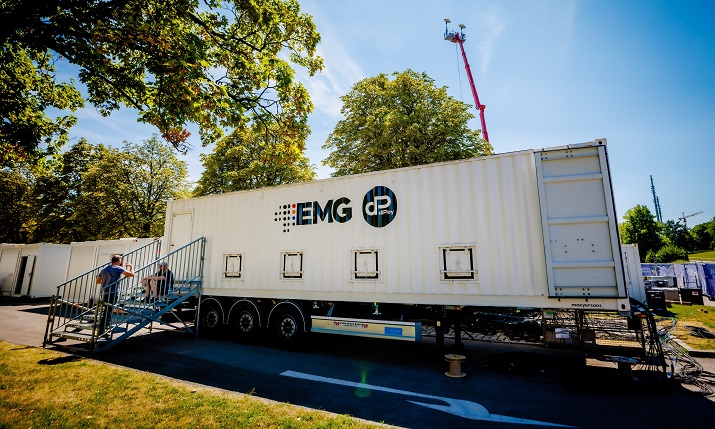 EMG’s diPloy at the IBC in Munich (Credit: Ben Houdijk)

Demeulemeester says that the use of diPloy in Munich means less cabling and fewer hours spent on installation. “We are present in more than 40 containers at the IBC and build up time was just five days, so the speed of the build was enormously fast. Engineering wise, it is enormously complex of course, because the whole infrastructure is IP. We still have lots of legacy into IP, but the core infrastructure is 100% IP-based.”

The second block of EMG’s role at Munich 2022 is a series of more traditional OBs to cover the events taking place around the city of Munich; a few miles south of the Olympiapark the beach volleyball and climbing at Koningsplatz, Rudi Sedlmayer Halle for the table tennis and Odeonsplatz for the marathon and race walking. Further afield is Messe Munchen for the track cycling, the Munich Olympic Regatta Centre for the rowing and outside of Munich the road cycling.

“We have six external OBs for sports that are not able to be hosted at the Olmpiapark, and they are working as standalone productions, feeding their lines back to the TOC here at the Olympiapark. From here, we do quality control, we reinject feeds to other galleries and we distribute,” says Demeulemeester, adding that signal distribution between the venues and trucks is taken care of by Riedel MicroN technology, which is not part of EMG’s contract. “We are working side by side on this project; they create the highways, and we fill up those highways with content.”

The third aspect of EMG’s role at the European Championships relates to the provision of wireless connectivity, from short range for roaming cameras at the athletics and rear-facing cameras mounted on bikes at the track cycling handled by EMG group company Broadcast RF to long-range coverage for events such as the road cycling and marathons.

The fourth and most complicated aspect of EMG’s role at the Championships says Demeulemeester is the media asset management system, which is based on an EVS network in the OB trucks and galleries, with some 54 EVS VIA servers in use. 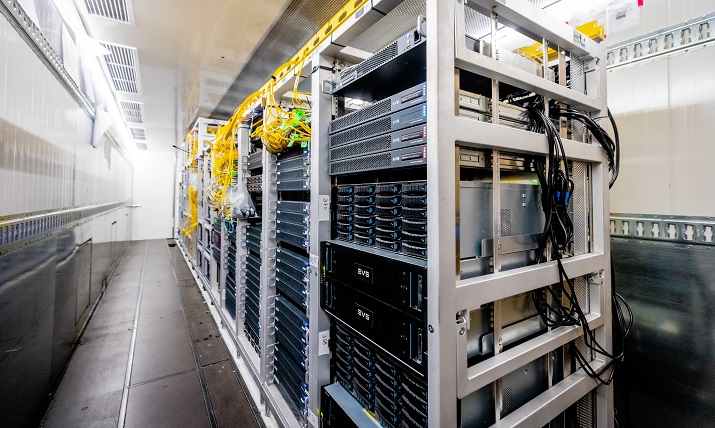 “The format we are using is 1080p 50, so we need the bandwidth,” he says. Other elements of the MAM setup include some 30 units of EVS IP Director for logging of content, along with eight Adobe edit suites plus a cloud-based distribution platform created in partnership with EVS to make all content available to rights holders and partners.

“So with a login, a journalist in the US can browse and search for content and download it on in any codec available on any format,” says Demeulemeester. “To run this, we have created a dedicated EMG network, with firewalls around it because of course you need to protect your network. So this is a very complicated for block that we are running for the LOC. In total, I think we are now having 912 terabytes of storage just to run the operation, and at the end of the Championships we will stay here for another 48 hours and upload that content to a temporary archive system.”