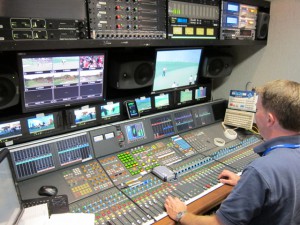 While the vast majority of broadcast production professionals at the 2012 Ryder Cup are focused on the live production the BBC is putting four Apple Final Cut Pro editing systems to use to help craft a two hour version of each day’s happenings that airs each evening and again the next day.

“Contractually we go on air after the last putt is scheduled so often we are on air while play is still going on because the speed of play can sometimes get quite slow,” says Paul Davies, BBC Sport, executive producer.

Davies says the production edits the matches as they go along.

“If the back nine is great we may drop some of the earlier coverage completely,” says Davies.

Helping with the production process is a 20-second delay that allows the BBC graphics team to create their own graphics. The delay not only gives the coverage a BBC look but also allows the network to not employ spotters on the course as they can re-key any shot or distance data from the graphics on the dirty world feed. 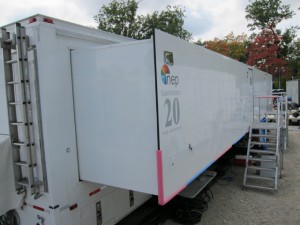 NEP SS20 is in use by the BBC for its condensed coverage of the Ryder Cup.

“Because we comment on it live it doesn’t feel crammed in,” explains Davies. “We can give away a couple of shots and simply say what happened in our commentary.”