Live from Sportel: DVS takes high-speed to next level for European market

Digital Video Sud is on hand at Sportel, the annual sports business conference held in Monte Carlo, with a range of new production tools including a new 4K ultra slo-mo camera system that can record at up to 1,000 frames per second in 4K mode while also outputting an HD signal and the ability to place a high-speed HD camera on a drone. 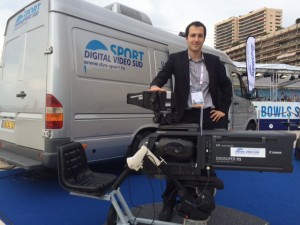 “We want to provide the right technology at the right place,” says Mathieu Lefebvre, head of business development for DVS Super Loupe Systems R&D. “We like to say we are not best in quantity but best in quality.”

The super slo-mo 4K system requires only one playback channel as the material is stored in the camera and then buffered before playout. Clips can be recorded at 1,000 frames per second for as long as 10 seconds.

The camera system also supports SuperZoom without the need for a third-party system thanks to a joystick control that allows for as much as 400% digital zoom.

The SuperLoupe Mini Aerial RF camera with high-speed HD recording was also unveiled and had a demo captured this past weekend of a jet skier performing a variety of tricks off the coast of Monte Carlo. Recording speeds can hit 1,500 fps with recording time of four seconds at 1,000 fps and sensitivity that matches the 4K SuperLoupe system.

“The idea is to have the same sensor used in the SuperLoupe HD system to also be in the drone,” says Lefebvre.

The key to lowering the size and weight was reducing the on-board recording to 12GB instead of 64 GB. Flying time tops out at 15 minutes and maximum speed at 60kmh. The system requires the drone to transmit video to a bi-directional HD receiver where a Grass Valley control panel tied to the CCU then sends HD signals to an EVS server. The EVS operator than cuts clips before sending them to the production team.