For the production team at CBS Sports, Super Bowl LIII is the culmination of years of work, site visits and planning. As usual, it’s a massive effort and provides plenty of innovation.

“I think we make a great team,” she said. 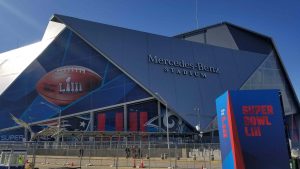 The efforts, as usual for a Super Bowl, are impressive. The CBS presence in the compound comprises 14 mobile trucks and 12 office trailers. There are 115 cameras being shared among 332 channels of record and playback, and 2,000 channels of local intercom (and 50 channels trunked to New York) ensure that production and technical operations go smoothly. CP Communications is handling all frequency coordination as well as wireless comms, wireless IFB mics, supplemental audio gear, and all audio efforts on the field and all five sets.

Francis says that having access to dark fibre to the sets has given the team control with respect to sharing resources wherever they are needed. There are also 29 transmission and receive paths, five uplinks, and 10 Gbps of data circuits for file transfers as CBS leverages the team back home.

This story first appeared on Sports Video Group US. To read more, go to: https://www.sportsvideo.org/2019/02/01/live-from-super-bowl-liii-cbs-sports-set-to-raise-bar-on-ar-during-super-open-115-cameras-capture-game-from-all-angles/