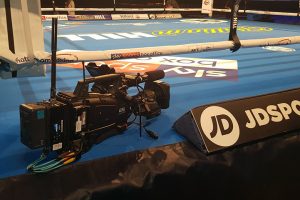 Coverage of the much-anticipated re-match between British heavyweight boxers David Haye and Tony Bellew was given the full works, production-wise, on Saturday night as Sky Sports Boxing broadcast the fight live on Sky Sports Box Office.

Haye Bellew 2, and the rest of the pay-per-view boxing bill at the O2 in London, benefited from the broadcaster’s ‘biggest spec in terms of cameras and lighting’, featuring four RF cameras – including two in native UHD – plus two high-motion cameras, a tri-motion camera and a high-wire point-to-point Batcam Wire system which was used for the first time.

Dressing room mini-cams were also deployed to stream footage of Haye and Bellew before the fight while a hand-held gimble system, the Batcam Hold, was used for their ringwalks.

The output was made available in UHD to those customers with the appropriate Sky Q set-top box and TV set.

“We only have the big screens on the big events,” she said. “The lighting is a much bigger rig than we would normally have too. And, with the UHD, it’s nice to offer something extra for the PPV viewers.”

The 1080 50P cameras were up-rezzed in the truck for the UHD output.

Chris Brandrick, commercial director at Broadcast RF, explained why they chose to use camcorders for the coverage: “UHD camera heads require a CCU to output 4K so we reverted to camcorders. You can get 50p out but not 4K.”

Eamonn Curtin, commercial manager at Telegenic, said they could have used Sony F55s but that would have restricted the choice of lens, in turn making it less user-friendly.

“It’s not just about finding the right equipment but also making sure the camera operators are given kit they are used to,” he said. “And that is a fine balance. They’re the ones that get the shots. They’re the ones who are carrying the kit around on their shoulders. You’ve got to make sure that they’re familiar with it.” 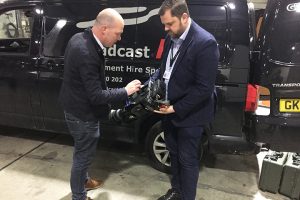 Although the camera configuration for Haye Bellow 2 did still require some up-rezzing, it was another step towards providing an RF set-up that is fully UHD.

“We can now genlock the receivers,” revealed Brandrick. “This means we don’t have to provide external synchronisers for the truck. It has been the signal delay that has held things up. There is still a very slight delay but it is now usable in a live environment.

“It’s baby steps at the moment,” he continued. “Every time we go out on an OB, there’s been something new, an upgrade or something different. We’re hoping that genlock is the last update. What you don’t want to do is risk the ringwalk. No one is that brave, yet.”

Both were used handheld with one at floor level looking up into the ring through the ropes from the photographers’ row and the other positioned on one of the corners of the boxing ring.

A high-wire camera system developed by the aerial filming company Batcam was used to provide shots from above the ring.

In and around the venue

The production team also installed minicams in the changing rooms. These provided streamed coverage, in short, 15-minute windows, at the permission of the boxers, showing their warm-ups and their hands being taped up. The content was streamed using Mobile Viewpoint transmitters.

Further Mobile Viewpoint transmitters were used for social media output, capturing shots of the boxers arriving at the venue. These pictures were sent directly back to Sky rather than to the truck, allowing the social media team to play them out.

“It’s baby steps at the moment. Every time we go out on an OB, there’s been something new, an upgrade or something different.”

A Batcam Hold, a mobile gimble fitted with a Sony camera head, provided live shots of the ringwalks, pictures that Blackmore said make “you feel like you’re right in with the entourage walking in.”

Presentation, fronted by Anna Woolhouse and featuring a number of Sky’s regular pundits including Johnny Nelson and Carl Froch, was done from the jib compound, just on the corner of the ring. “This means that we’re nice and close to the action,” added Blackmore.

At the O2, Telegenic supplied its T25 scanner, the first of the company’s three UHD units. The Quad SDI truck features a Grass Valley Kahuna vision mixer and is capable of handling 30+ camera channels.

For unit manager Martyn Edwards and his team, it was a fairly standard rig, although he was grateful for being given an extra rig day, something that isn’t afforded at all fight nights. “It’s a bonus,” he said. “We’re normally in and out in a day, and we’ve got that process fine-tuned. But the extra day buys you more time if something happens to go wrong.”

Of more immediate concern for Telegenic is its T23 truck, which will be upgraded to UHD later this year to help with its BT Sport contract.

“We have to make a decision over the summer about whether we stick with Quad SDI or take steps into the world of IP,” said Curtin. “It’s still up for debate and we haven’t made our final decisions. When we do, we’ll make sure it is for the correct reasons.”

“The next step is what do we do with replays. But that is the million dollar question.”

Once it has been re-fitted and re-launched, T23 will be used for next season’s football, rugby and boxing coverage. And Curtin hopes his company will very soon be able to offer producers a 100% UHD set-up.

“We’re steadily building on the UHD,” he said. “Currently, it’s a hybrid solution with some specialist cameras that need to be upconverted from 1080 50i and 1080 50p. We’re getting very close to the full UHD camera solution though. The next step is what do we do with replays. But that is the million dollar question.”

Haye Bellew 2 was broadcast live on Sky Sports Box Office on 5 May 2018.