Live from The Open: CTV OB and ETP tackle new course, with a move to IP

The 148th Open Championship is into its second day of competition at Royal Portrush in Northern Ireland. The last time the Open was played at the course was 1951 so it’s giving some fresh energy to the CTV OB and European Tour Productions (ETP) teams. And the effort has seen some Open Championship firsts for the production, including the first time the compound has been located on a car park and the first time CTV OB had to shut down a compound as biblical rains during a set-up day caused serious flooding. 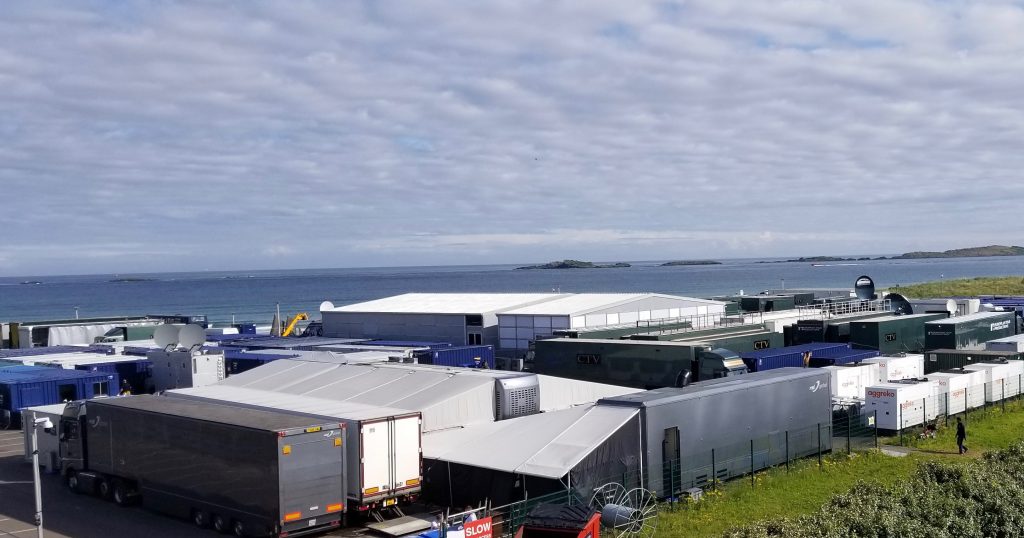 The compound at The Open Championship at Royal Portrush is the first to be on a tarmac.

“We literally had to shut down the compound and then the next morning raised all the power onto platforms,” says Alan Jessop, CTV OB technical producer. “We solved all the issues and then brought everything up again.”

The rain has continued off and on during the tournament, but it has not impacted operations. One blessing is the tarmaced car park, which is a first for an Open, at least as far as memory serves.

Richard Morton, CTV OB, head of projects, says he has not come across anyone who has not enjoyed working in a regular shaped tarmaced area.

“It enables us to be parked together closely in a tidy fashion as often on a golf course the compound is on undulating ground,” he says.

The beachside parking lot is home to 11 CTV OB remote production, 17 support trucks, catering, and office trailers and the core of the production includes 175 cameras as Hamish Greig, CTV OB, CEO, says the tightness of the course allowed for a reduction in the number of cameras.

“You are always looking to make savings where you can but not let it be seen on screen,” he says.

RF cameras and mics are also part of the mix as there are 29 RF cameras, 79 low-power radio mics, 50 high-power radio mics, and more than 600 walkie talkies. There are also 35 EVS XT3 servers and an EVS VIA server which is being used for UHD and HDR coverage of holes 5, 6, and 7. 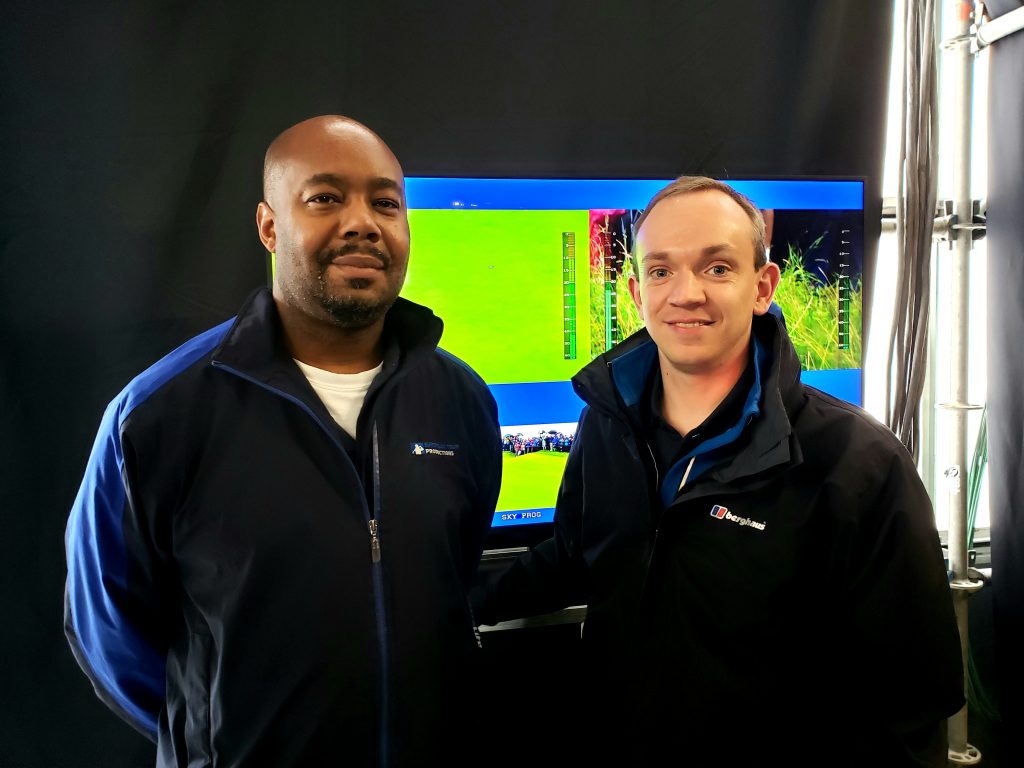 Paul Francis (left) and Richard Morton of CTV OB are at the center of technical operations at The Open.

Paul Francis, CTV OB, CTO, says the VIA servers is an upgrade from an XT4 which was used last year.

“It has two more inputs so they can follow more golf in UHD and HLG and if you walked up to the control you would not know anything was different, but it has eight times as much bandwidth,” he says. “It’s quite impressive.”

ACS is also heavily involved, providing a lipstick camera at the first tee box, rail cameras at holes 1, 3 (being the tee box), 6, 13, and 16. Four locked-off POV cameras, one Smarthead POV camera, and nine bunker cameras are also part of the mix, Eleven holes are cabled for Toptracer (there are also two RF Toptracers, one for NBC and one for ETP which produces the host feed).

Entities in the compound include ETP, Sky Sports UK, NBC, The Golf Channel, TV Asahi, the BBC, and BBC and IMG Radio. Studios are located across the course for NBC (host and main studios), a Golf Channel studio for “Live from The Open,” the Sky Sports Open Zone set on the practice range, and then a BBC studio.

Royal Portrush has held its share of tournaments, including the Irish Open and the Seniors Open. That means 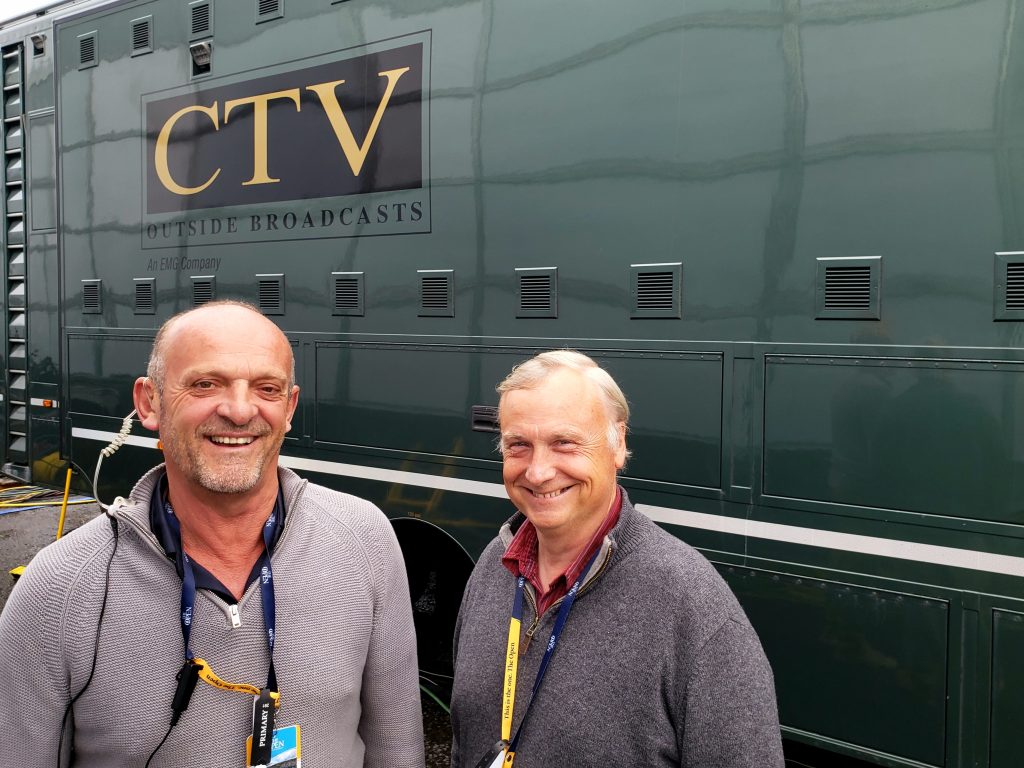 Hamish Greig (left) and Alan Jessop of CTV OB at The Open Championship in Royal Portrush.

there was an existing fibre infrastructure but Boston Networks, which is hired by the R&A to provide fibre infrastructure, worked closely with Jessop and the CTV team to install two rings of fibre around the course. Those rings are managed to provide redundancy in case of an incident like a fibre cut and they provide more than 1,500 strands of connectivity. There are 17 nodes across the course making it possible for various production resources to tap into the fibre and deliver video and audio signals.

“Some of them are main nodes that are in concrete and will remain in place (but out of site hidden under gorse bushes, etc. while there are sub-nodes that are under things like grandstands or scoreboards,” says Jessop.

Power requirements are being met by Aggreko and FTVS as they supply power to the compound as well as the nodes around the course.

“The density of facilities on each requires good quality redundant power so we have twin generators that are monitored,” says Jessop.

There have also been a couple of improvements, one of which is that all of the audio needs have been streamlined and are now in one cabin.

“We have audio submix with RF audio and MADI all together with Ian Smith, head of audio, in the middle of it all,” says Jessop. “Bringing all of audio together is a great advantage.” 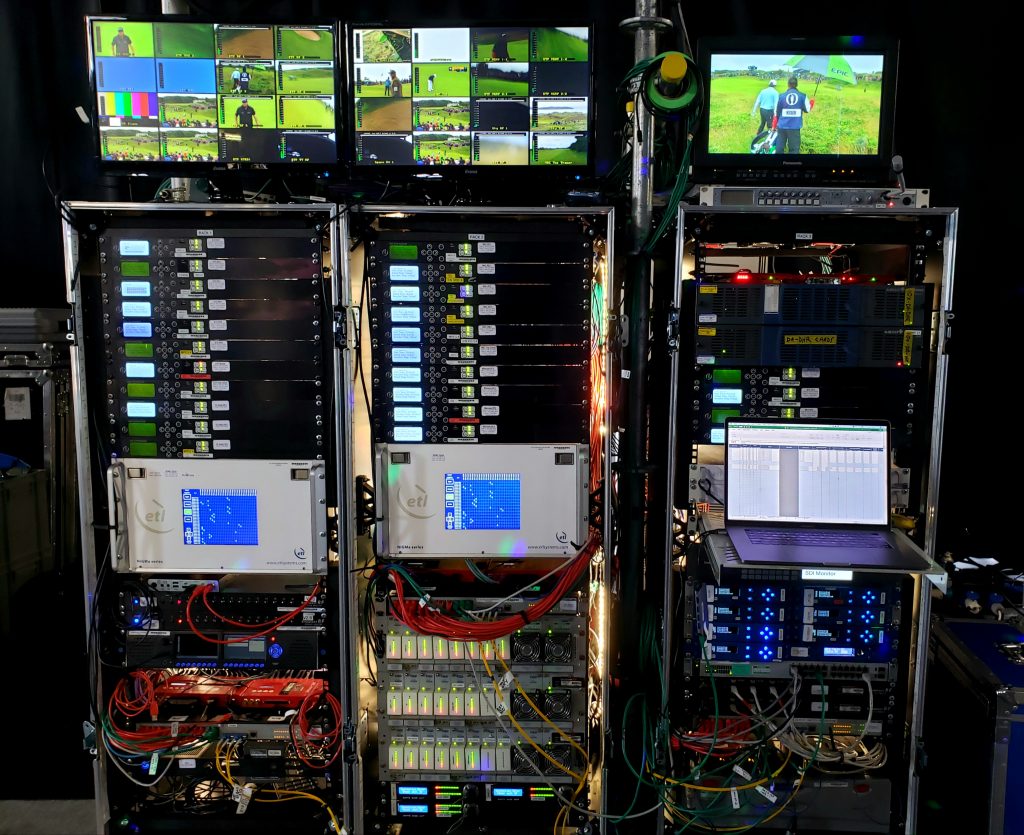 Another change is that Broadcast RF have also been integrated into the OSCAR (Outside Source Central Apparatus Room) main distribution center, a move that eases compound cabling and improves operations in other ways. Last year the MST graphics for the world feed machines moved into the OSCAR.

“Having MST graphics for the world feed along with Toptracer computers and Broadcast RF racks alongside the EVS servers in one room helps communication, lengths and amount of cabling, and also offers more compact architecture for the system,” says Morton. “It’s also more comfortable for the engineering and production teams to work as the production team doesn’t have the noise of machines.”

Adds Francis: “Third party suppliers are coming to us and they want to bring their kit into the machine room and have it in the racks with everything else. They are seeing the benefits of being in the production area without the whir of computers. There is more space to work and they can focus on the production needs.”

The Move to IP

CTV OB next year will take a big step forward when it rolls out its first all-IP truck in the first quarter of 2020. Francis says the company has taken a long but very deliberate road to IP-based facilities and that SMPTE ST-2110 is an important part of the move.

“It is based on the Euromedia 2020 style of unifying networks and having easily expandable facilities that are building blocks,” he says.

As part of the journey to IP the CTV OB team has taken small steps to test and become accustomed to working in IP. Morton says that they are creating as many opportunities as possible to test elements and different layers of the systems that will come together to form the IP-based truck.

“The NBC tape room here has video monitoring is baseband SDI but all of the EVS controllers, intercom, audio monitoring, KVM, and the router control panels are sitting on one common network with distributed network switches in each desk position,” says Morton. “This is how we see the new truck working, so by testing all of those control aspects and having them trunked back to the MCR on a couple of redundant fibres rather than dozens of Cat 5 cables is a good example of that testing. And elsewhere, we are using IP multiviewers to fulfill monitoring requirements so we can pick up signals from remote and distributed locations around the compound and bring them into one small IP area and then distribute accordingly. So, it’s helping us to smarten up the infrastructure but without going all the way for a show of this scale.”

Greig says the efforts around IP will take another step during a future tournament to be played in the upcoming weeks.

“We are going to do a marquee group production via remote IP and iron out some of the wrinkles on things like managing bandwidth and see if it can be a feature going on from there,” he says. That effort will involve parking the OB unit a mile away from the compound and using fibre tie lines to tie it back to the main compound.

Francis says the ongoing efforts will also benefit technology partners involved in the OB build as they can give feedback to the manufacturers which will ultimately better meet CTV OB’s IP production needs.

Morton says the goal during the transition to IP is to give the production and technical team as well as third-party partners as many chances as possible to become familiar with how IP impacts different areas and job functions.

“Everyone is starting to get familiar with it and join the journey to the new truck and learn hands-on how the technology reacts and performs,” says Morton.

But for the next 72 hours the focus is on Portrush and the 148th Open Championship.

Adds Greig: “Our team has been phenomenal, and I cannot praise them highly enough. How they do it amazes me.”