SMT (SportsMEDIA Technology) is once again on hand at The Open, supporting The Royal & Ancient Golf Club’s efforts by providing the official scoring system and also helping turn that data into onscreen graphics displayed on leaderboards across the course and in the media center. And this year’s Open also coincides with two new events for the company: a five-year renewal of its contract with the R&A that extends through 2021 and the announcement of the opening of the company’s first new office in London. 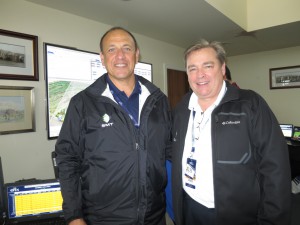 SMT’s Rallis Pappas (left) and Gerard J. Hall inside the company’s operations area at The Open in St. Andrews.

“For years, we have been servicing clients in the UK and Europe, and everyone is asking for other products and services,” says Gerard J. Hall, CEO/president, SMT. “Now we will be able to service them better by being located in the same geography.”

Major clients in Europe already include The Open Championship, Wimbledon, Roland Garros, NBC at the Tour de France, and WTA events. The new office is expected to have 20 staffers — business development, engineers, support staff — by the end of the year. That, says Rallis Pappas, president of the Jacksonville, FL, office, will go a long way toward servicing those clients and also finding new ones.

“Some clients are reluctant to do business with our offices in the U.S. so having an office here takes that out of the equation,” he says.

The key to SMT’s business is its ability to track sports in real time, including ball and player position. For example, at The Open, an SMT staffer or volunteer is assigned to walk the course with every group of players and use a PDA to enter shot data and scoring information. That information is transferred via wireless systems to nodes on the course, which take that data and deliver it to the SMT scoring computers inside the Ladies Putting Club House.

“When the data comes in, it triggers the content that is shown on the LED leaderboards on the course and in the media center,” says Pappas. “If everything is working well, that will happen a second to a second and a half of the score’s being entered.”

SMT is also involved with Championship Information Systems, cutting video clips that are also fed to the Website. Data points related to pace of play are also reported and used for internal use by the R&A. 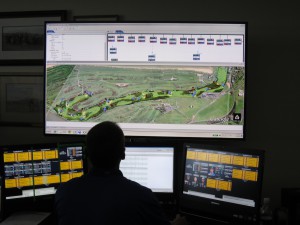 A look at the SMT monitor that allows the operators to keep track of where players and scorers are on the course.

The work at the R&A builds off similar systems that SMT has created for the PGA Tour, The Masters, and the U.S. Open.

“The data collected here is not as detailed,” Pappas adds. “For example, they don’t collect fringe information.”

The SMT team also witnesses firsthand the push and pull between the majors.

“The R&A really gets it and understands it’s all about fan enhancement,” says Hall. “We’ve been doing this event since 2010, and, every year, the R&A provides more and more value to the fans with WiFi across the course, mobile apps, and more. And the U.S. Open gets it as well: they came here and saw what the R&A was doing with LED displays and added those to their event this year.”

The advances being made on the client side are a major reason SMT is bullish on the future.

“We’re providing a great service and will be in a better position to provide that level of service to more clients,” says Hall. “We intend to grow.”