Live from the PGA Championship: CBS Sports caps off busy start to 2019 with massive production at Bethpage

The month may be different this year at the PGA Championship, but one thing hasn’t changed: CBS Sports has once again rolled out a full arsenal of technology at Bethpage Black to cover the battle for the Wanamaker Trophy. The tournament’s shift from August to May this year made for a quick turnaround for the CBS Sports operations team following last month’s Masters Tournament, but that hasn’t stopped them from deploying one of its largest and most technology-driven productions ever. 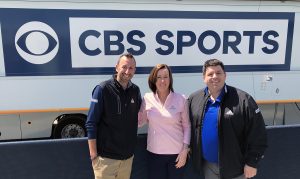 “It’s been a very busy year for us. We went from Super Bowl to NCAA Final Four to Augusta and then here,” said Patty Power, EVP, operations and engineering, CBS Sports. “But we’ve known the [PGA Championship’s] move to May was coming for a while now, so we started planning as early as possible last year. It’s really all about scheduling and efficiently deploying our people and resources. Both the engineering team and the remote-operations team have been amazing, and we’re really proud of what we’ve accomplished over [the last four months].”

The 24 trucks (including satellite uplinks) inside the production compound located just behind the 11th tee were led by NEP’s SSCBS and Game Creek Video’s Encore mobile units, which covered the back nine and front nine, respectively. NEP’s ND7 split duties between the CBS-produced Featured Group 2 streaming coverage and CBS Sports Network’s PGA Championship On the Range and Clubhouse Report onsite studio shows (CBSN was an at-home production at last year’s PGA Championship). Game Creek’s Pride was handling the 4K HDR production at the No.’s 16-18 show, which was then downconverted to HD SDR for the Featured Holes streaming coverage.

Meanwhile, Turner Sports had NEP SS15 on hand for its Featured Group 1 coverage streaming (with ST28 as its B unit) on PGA.com, PGAChampionship.com, and the PGA Championship app. In all, CBS Sports’ PGA Championship operation had a whopping 212 channels of EVS replay across all the trucks.

CBS Sports deployed 92 cameras throughout Bethpage, as well as 90 additional cameras for the 4DReplay system on No. 15. This complement included a new high of nine high-speed cameras: two Phantom v642 for SwingVision and seven Sony HDC-4300’s running at 6X slo-mo. Also in the mix were 18 RF cameras (provided by NEP’s BSI), 22 camera towers, 20 Toptracer systems (18 tee cameras and two RF cameras), and an army of robotics (supplied by NEP’s Fletcher), and the blimp camera (which featured Toptracer capability for the first time).

Bethpage State Park’s sprawling footprint proved to be challenging, with the truck compound located more than a mile from CBS’s studio set at the Bethpage Clubhouse. CBS worked closely with NEP and Bexel to run 41 miles of multistrand fibre throughout the course, the longest single run being more than 8,000 ft.

“The sheer size of this place is amazing: we are spread across two counties, and we have to cross a major road,” said Power. “We started loading in here three weeks ago, and the size of [Bethpage Black] has been very challenging, but it’s a beautiful course, and Bethpage and the PGA have done a great job.”

CBS produced 4K HDR coverage from Bethpage Black’s Holes 16, 17, and 18 during all four rounds for distribution to AT&T’s DirecTV. The show, which ran out of Game Creek’s Pride A and B units, was produced as a fully 4K HDR feed, then downconverted to HD for PGA Championship live featured-hole coverage on PGA digital platforms and DirecTV’s PGA Championship Mix.

“We’ve continued our model where we try to stay as [4K HDR]-native as possible,” said Mike Francis, VP, remote engineering and planning, CBS Sports. “We try to give our production teams all the bells and whistles that we can regarding camera angles, replay, graphics, and other technology.”

Between unilateral cameras and cameras shared with the main HD show, the 4K HDR production had 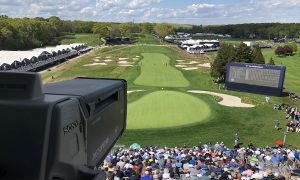 The major new addition to this year’s 4K HDR coverage was a 1080p HDR blimp camera, delivering pristine aerial shots of Bethpage (the camera is converted to SDR for the HD show).

“Having native HDR on the 4K show today is really going to make a difference,” said Francis. “Those are the enhancements that we’re working towards for HDR, to make it the complete show that our production teams and everyone comes to expect, like they were doing the main show.”

2020 on the horizon: Launching ESPN partnership at Harding Park

“We love our Turner family, and we’re extremely proud of what we’ve accomplished together, but we’re very excited about new challenges ahead with ESPN,” said Power. “Also, the PGA of America starts planning their events multiple years out, so we’re already talking to them about Kiawah [Island Golf Resort in 2021].

“We’re always just trying stay ahead of it and figure out where all the technology is going, because, every year, we try to tee up as much as we can for our production team. What’s new? What makes sense to bring back? What can we do to enhance what we’re currently doing to help with the storytelling?”