Live from The Ryder Cup: Creative Technology serves up LED for fans

The Ryder Cup is an unusual golf event in that fans on site aren’t usually given a chance to watch hours of live golf. In fact, it is distinctly possible that a fan can spend an entire day on site in the stands and see less than 30 shots live. And that’s one of the reasons that the use of LED screens providing live video coverage from around the course is so important. 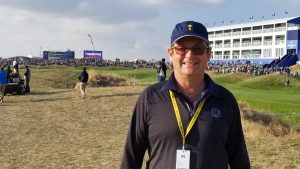 “This is the most incredible natural amphitheatre to watch golf and typically we would have more screens that were smaller,” said Dave Crump, Creative Technology Europe, CEO.

“But here the challenge is finding locations where they don’t significantly obstruct the view. So instead we have bigger screens around the bowls which pushed up the overall area of the screens.”

Creative Technology (CT) is providing four huge 144 square metre screens (for a combined 1,464 square meters of LED) and 447 TV sets that are deployed around the site, ranging from 15- to 85-inches in size.

Two of the screens are also beyond HD with 2,500 pixels so it is way in excess of what is needed,” says Crump.

The LED screens are manufactured by ROE and InfiLED and Crump says their high contrast capabilities and 5.9-pixel pitch are both huge steps up from previous Ryder Cups.

“We don’t need that [pixel density] in this environment, but it is the norm with most events,” he added. “The real important thing is contrast and having the punch to get through daylight.”

Because of the decision to go with bigger screens rather than more numerous screens, the ETP made the decision to not have graphics on the screen, like a leaderboard or social media feeds.

“The viewing distance is so long there was a need to go full frame with the video,” said Crump.

CT decided to use RF for distribution of signals to the TV sets around the course, a change of pace from the usual ETP event. The reason? With more than 450 sets the cost of IP set-top boxes made it more cost effective to give up some of the flexibility of IP.

“Also, the cost of DVB encoding is much less than it used to be, and it is reliable and easier to use in large volumes,” said Crump.

The video control room for the scoreboards is located in a CTV OB unit in the compound as Creative Technology has a presence at all of the European Tour events which makes use of CTV technical facilities. The control room in the CTV OB unit has two Blackmagic Atem units as it only needs to mix between two or three feeds. Here at the Ryder Cup a third mix effect was needed so the team is tapping into one of the other production switchers in the truck.

“We are part of NEP, but we have a fantastic relationship with CTV on the golf tournaments and we work hand in hand all the time,” said Crump.

Creative Technology also has a presence in the Media Centre where a new design for the LED screen increases the size of the two main leaderboards to 48 square meters of ROE CB3.

There is also a control room in the Media Centre that controls 16 channels of custom graphics to provide dedicated feeds to each on-course LED screen and with the ability to send individual messages. A push button system provided local control to each LED screen to change to a static scoreboard when the players were putting. Five Riedel MediorNet Micron frames are also at the Media Centre providing all routing and multi-viewing with a return from each LED screen to monitor the status.

“The MediorNet nodes offers a highly flexible way to feed video and audio around the site and route anything we want anywhere,” added Crump. 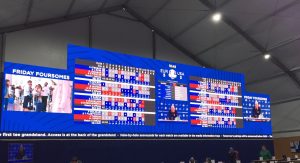 “It also has a main leaderboard and a whole bunch of data that is controlled by the Barco E2 presentation system which is a powerful high-resolution compositing system,” said Crump.

And it’s not all about video. A Digico S31 console connected to the MediorNet system via MADI collects feeds from the TV and radio broadcasters. Those are then sent to an infrared multi-channel audio system that allows 425 journalists I the Media Center to access the most relevant audio.

And while many in the industry are looking to a future of UHD and HDR Crump and his team still place maximum energy on dealing with nature.

“The biggest challenge is contrast and sunlight, so we have the best technology available but can still struggle when the screen is facing west and the sun is setting,” explained Crump. “I think it will be a long time before UHD and HDR will be on a golf course.”