Turner Sports is at the Ryder Cup working out of CTV’s OB1 production unit, overseeing a remote production that involves sending 16 feeds to a control room in Atlanta, where they are cut into featured-hole coverage available via PGA.com and RyderCup.com.

It marks the first time that featured-group coverage has been provided at the Ryder Cup. “This is similar to what we did four years ago at Gleneagles [in Scotland], but there we just did two holes, as we were confined to certain holes,” said Tom Sahara, EVP, technology, Turner Sports. 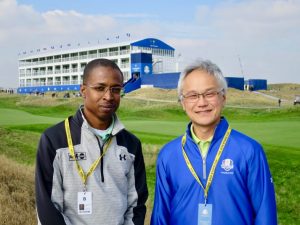 The 16 feeds are sent to Atlanta by CenturyLink via open internet, and Sahara says there have been no issues. Audio submixing is done in OB1 for tee shots, fairways, and the green so that the team in Atlanta needs only to mix the sound to match the commentary.

“The RF cameras cover the walkups between shots,” said Sahara. “Viewers can see how the golfers measure their next shot and things they don’t see on a regular golf telecast, which is typically stroke to stroke to stroke. You don’t usually get to see what happens in between.”

The Turner team follows a group during each of the four sessions on Friday and Saturday as well as on Sunday, when 12 head-to-head singles matches are played.

“On Sunday,” noted Sahara, “if there is an early finish for a match, we will move to another match that is finishing later.”