Live from the US Open: NBC Sports plays host with the most 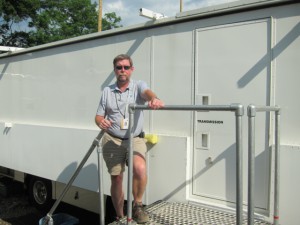 Ken Carpenter of NBC Sports oversaw the technical aspects of the US Open TV coverage this past weekend.

The US Open this weekend proved once again that UK golfers are up to the challenge of the US Open and also that broadcasters from around the world could weather set-up conditions that made getting the course ready for play almost as difficult as playing it. Torrential downpours that dumped about 10 inches of rain on the course over the seven days leading up to the tourney, making for a challenging set up that had crew members digging drainage ditches, created plenty of muddy and wet shoes, and continued a golf season for NBC Sports that has seen it all.

“We’ve had snow in Arizona, and microbursts in Orlando,” says Ken Carpenter, NBC Sports, technical manager for golf who oversaw the technical set up of what was, ultimately, the core of the World Feed and NBC’s domestic coverage. “It’s been a brutal weather year for golf.”

When the wet conditions hit late last week cabling priorities were shifted as officials did not want any cabling taking place on the course during the more-than-damp conditions.

“Friday was still a mess so most of it got done over the weekend,” adds Carpenter. 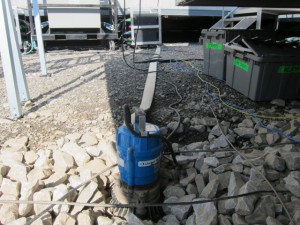 One of the sump pumps that played a heroic role in draining a US Open TV compound that was under water during storms last week.

The course at Merion is fairly straightforward and doesn’t offer dramatic water features like the TPC Sawgrass or Congressional Country Club, which hosted the Open two years ago. So there were no cameras flying on cables over the course and, in a first, there also were no camera cranes.

“We’re starting to look at frequency allocation a little differently and when you are up in the air you can get interfered with,” says Carpenter. “But now our highest antenna is 30 feet in the air and, so far, it’s been more stable and we have had better results than we would have had with a crane. Plus we don’t have to ask the course superintendent where we can park a 60,000-pound crane on his golf course. I’ve gotten some strange looks over the years asking that.”

And while there are some cost savings the need for additional RF receive sites, fibre cabling, and generators doesn’t make the cost savings as substantial as one might think. But they are there.

“Some events like the Amateur Championship will still be all RF,” adds Carpenter.