Live from the US Open: Program Productions has whole world in hands for US Open coverage 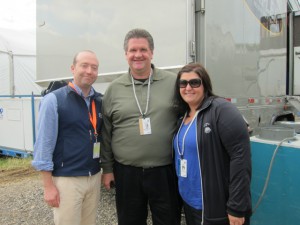 The responsibilities of NBC Sports at the US Open this weekend extend beyond its own domestic demands and include making sure that broadcasters in more than 280 countries also have a solid golf viewing experience. And for the fifth year the USGA has worked closely with Program Productions to make sure that NBC’s clean feed is complimented with content during commercial breaks that doesn’t leave viewers in the dark.

The Program Productions team is about 90 strong during the 10 days leading up to the tournament and calls NEP Corplex Chromium, Iridium, and Platinum home during the event.

“We’ll take the NBC feed from the main show and during commercials our own announcer, Pat Scanlon, and our own cameras and replay guys will follow the international players,” says Robert Carzoli, Program Productions, president and CEO.

Meg Kelly, who is program producer for the world feed, says that the US Open has a larger field of players during the first two rounds than the other majors. That puts pressure on the team to make sure broadcasters around the world have a chance to showcase players that often don’t make the cut for the NBC main feed.

Program Productions is also working with the UK’s BskyB and TV Asahi in Japan, both of whom are producing their own feeds. BskyB, for example, is operating out of Telegenic production containers (not quite OB units) and mixing in their own cameras as well as two roving talent crews who are on the course.

“We’re fortunate enough to have a strong relationship with the USGA and when we are here we’re an extension of the USGA,” adds Carzoli.

Up next on the golf circuit for Program Productions? The US Women’s Open Championship, taking place on June 27-30 at Sebonack Golf Club in Southampton, NY.