Live From the World Championship of Ping Pong: CTV puts AirBox through its paces 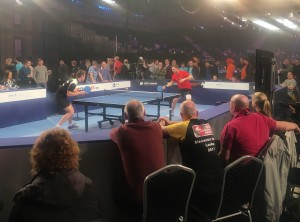 The World Championship of Ping Pong – which took place at Alexandra Palace in North London on 28-29 January – provided an opportunity for CTV Outside Broadcast to test the capabilities of its AirBox system. The innovative fly-pack solution can be used in a variety of configurations, offering the chance to house multi-viewers, monitoring, camera racking, vision mixing technology, audio consoles and more.

For the Ping Pong tournament, CTV deployed the AirBox in streamlined form at the suggestion of Sky Sports, who were keen to experiment with the remote production capabilities of the solution. A small team of CTV and Sky personnel took up residence at Ally Pally on the day before the tournament began, whilst production was carried out back at Sky’s facilities in Osterley.

Dan Smith, CTV Unit Manager for the event, guided SVG Europe through the workflow as the production was about to go on air. “We have seven cameras here, covering the ping pong, and are sending the signals back to Sky via NTT encoders. Essentially, we are bringing the camera signals back from the auditorium to the CCUs through a DA, and then feedback the encoders and going out on an IP network back to Sky,” he says.

“Within those seven camera circuits we are also embedding four tracks of audio, containing all the different audio ISOs – mics, commentary effects mics, etc. They are all embedded onto video and Sky at the other end can de-embed and obtain all the audio sources.

“We also have a MADI over IP stream going back to Sky, and all audio sources are embedded there as well. In fact, that is the primary way of getting the audio back at Sky, with the embedded video circuits being the second path of the audio.”

The audio desk was used only to produce the IEM mixes and set the levels of the effects mics, but also a mix for the PA system at Ally Pally.

The multi-viewers that would often be included in AirBox were not required as all the vision mixing was done back at Osterley. “They had a full team there and were doing the EVS [ingestion] and graphics there,” says Smith. “We also got three circuits back from Osterley to Ally Pally, and on there we get the main programme feed; the auxilary feed that goes to the vision monitors on the floor; and the off-air.”

Other variations from the usual deployment of AirBox included the use of two Lawo V_pro8s for video processing.

CTV and Sky put in place a comprehensive recovery path “with BT out [in the car park] doing the IP connectivity. All the encoders and decoders are located there. Two strands of fibre go out to BT and then pass into the network. They are also doing standard video transmission, with Cameras 1 and 2 both containing four tracks of audio each. So if the network fell over [Osterley] would still receive two camers with eight tracks of audio between them – meaning that a limited show would still be possible.”

On the auditorium floor, the seven-camera rig included six locked-off units and one beauty camera. An RF camera was used to capture action across the entire floor, which included one ‘show court’ as well as a number of smaller tables between which attendees could move freely. Sony HDC-1500s were predominant in the set-up.

Speaking as the two-day, 16-hour broadcast on Sky Sports 2 got underway, Smith said that the system had proven to be “straightforward to set-up and configure, and shown that it can be modified quite effectively to handle remote production. The original idea [for AirBox] was that it serve as a simple de-rig kit with minimum engineering and staff. However, it is evident that it is flexible enough to handle these other applications.” 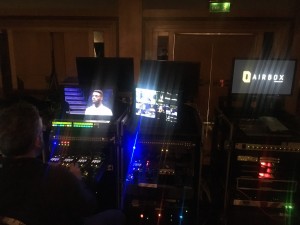 Sky production manager Trevor Fegan confirms that the broadcaster was “keen to explore the opportunities presented by the AirBox, and it’s proven to be a very effective choice for this project.”

For CTV, the use of AirBox at Ally Pally represents a further evolution of its approach to the World Ping Ping Championship, having initially deployed a traditional OB set-up. “Sky knew we had the AirBox and felt that it was an opportunity to experiment with that,” says Smith. “They believed it had the capability to be modified so they could do a remote production. And of course the cost-savings from remote production can be considerable…”

Elsewhere, CTV has been putting AirBox through its paces at a diverse selection of events – from a pre-Brexit debate at Wembley Arena and the World Economic Forum in Davos, to the latest series of The Only Way Is Essex. “It’s underlined proven the value of the solution and its flexibility,” concludes Smith.