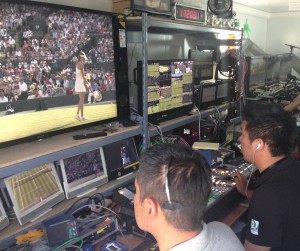 NHK personnel preparing the 8K feed at Wimbledon on 1 July 2015.

The broadcast industry has been keeping a close watch on the development of NHK’s 8K Super Hi-Vision technology for some time now. Following high-profile demos at the London Olympic Games, the Sochi Olympic Games and the 2014 FIFA World Cup in Brazil, 8K has this week made its debut at the Wimbledon championships with a trial taking place on No. 1 Court.

Devised to deliver four times the resolution of 4K and 16 times that of standard HD, the 8K format is the result of an extended period of research by NHK into Ultra HD technology. Japan’s Ministry of Internal Affairs and Communications laid out a roadmap last year in which 8K UHDTV is set to begin test broadcasting on satellite in 2016 and roll-out to full broadcasting by 2018.

At Wimbledon, the 8K feed – viewable only in a dedicated theatre that has been established on top of the Broadcast Centre and which is accessible to accredited media professionals – is being created by a total of four cameras: two Ikegami 8K SHV-8000s, one Sony F65 4K and one For-A FT-ONE 4K camera. Upconversion of the FT-ONE camera is achieved using a converter manufactured by Japanese-based ASTRODESIGN, whilst the F65 is being used with a live adapter and is upconverted with a Sony BPU-8000. Vision mixing is being undertaken with an 8K switcher provided by NEC Broadcast Products.

Sound-wise, NHK is primarily relying on HD host microphones set up on No. 1 Court, but is also mixing in the feed from some of its own Sennheiser and DPA mics as required. At the heart of audio world is a Lawo mc266 console, brought over from Japan and delivering a 22.2 mix into the 8K theatre. 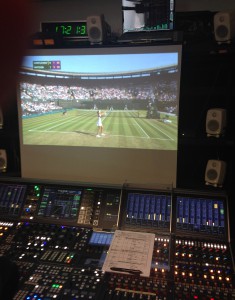 There will certainly be plenty of 8K material to sift through and assess once the championships are complete, as Tetsuya Itsuki – who is senior manager in the Broadcast Engineering Department for the News Technical Center Outside Broadcast Engineering Division at NHK – reports: “We are filming two matches per day throughout the tournament, up until the last four days.”

The 2015 tournament was selected for the trial “as it’s a quieter year in terms of major sports events and we have more crew and resources available. Plus, the Club was keen to have us and made space for the trial to take place.”

As for the longer-term 8K roadmap, Itsuki confirms that the intention is still to undertake trial broadcasts next year. Commercial receiver hardware is now in development, although at present there is no firm date for this to be made available on the market. One of the major targets that the broadcaster has in its sights for 8K production is the 2020 Tokyo Olympic Games.

“We continue to work towards having an 8K service ready to offer in 2018,” confirms Itsuki.