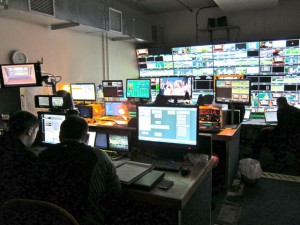 ESPN has two control rooms in use for Wimbledon 2012.

Wimbledon 2012 marks the first year that ESPN has the complete domestic U.S. rights to broadcast the championships, and while it currently feels very much like last year’s production, the team is well aware of the challenges and opportunities that lie ahead, especially next week when the network will cover matches simultaneously on both ESPN and ESPN2 and then settle in for its first crack at the semis and finals.

“This is a four-stage run for us,” explains Jamie Reynolds, ESPN, vice president of event production. “The first phase is what we do at every major, 10 hours a day of coverage. Then phase two is the middle weekend and ‘Breakfast at Wimbledon.’ Phase three, in week two, has the complexity of having matches on ESPN and ESPN2 simultaneously, so we double the delivery system. And then on the final Thursday to Sunday is phase four, the semis through the finals.”

Reynolds likens this week’s coverage as the flats of the Tour de France. Next week? That, he says, is going to be more like a mountain stage in the Pyrénées. But that doesn’t mean ESPN won’t be ready.

“It’s fair to say that we have, in some categories, doubled the work force, and in other categories, just to get the volume of hours that we’re doing, we’ve almost tripled the number,” says Reynolds. “And when you look at it, just the sheer magnitude of operating on a 10‑hour day for the first week, and then the second week when we’re simultaneously broadcasting on ESPN and ESPN22, to say nothing of ESPN 3D and prepping things for ABC, we’ve got a work force that’s running concurrently right about that second week. So that now requires us to have two fully functional integrated control rooms.”

With more than 250 people on site the network is not only interfacing closely with the BBC but also keeping a low profile, something that isn’t always easy with such a large presence. But this is Wimbledon and, much like The Masters in golf, it is separate and apart in terms of its stature, commitment to tradition, and status in the sport. This is, after all, a private tennis club, just like Augusta National. 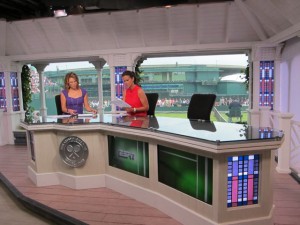 “We have a healthy sense of what our responsibility and stewardship requires,” says Reynolds. “A lot of people will be watching what we do.”

Mervyn Hall, broadcast manager for the All England Lawn Tennis Club, has worked closely with ESPN to make sure the network makes the most of its new role. Historically there is always some trepidation when an American broadcast network arrives in force the way ESPN has done this year. But that trepidation has given way to solid teamwork and mutual respect.

“The ESPN relationship has gone extremely well as they’ve embraced the spirit of the championship in a way we thought they would,” says Hall. “Jamie [Reynolds] and his team spent a lot of time talking to us about style and what their coverage will look like. We’ve found a common ground.”

Also finding a common ground is the BBC who holds a major role at the tournament as host broadcaster.

“They met a lot with the BBC and [BBC executive producer] Paul Davies is extremely accommodating to international clients,” adds Hall. “So ESPN and the BBC have been working on sharing cameras, commentary duties, and beauty shots. There is a really good feel to the relationship and everyone is very pleased.”

Adds Reynolds: “We’ve uncluttered a lot of the complexity and the relationship requirements of working with the club.” For example, the ESPN broadcast schedule is similar to that of the BBC.

“That creates some harmonies that are similar to the way we work with them on the Open [golf] Championship,” he adds “It’s a healthy dynamic and similar to our relationship with CBS for the U.S. Open and Channel 7 in Australia where things are more helpful rather than competitive.”

The ESPN stamp will be seen on air most visibly in coverage of Court One which will now have a camera complement that is the same as that on Centre Court.

“We know we have to live there when we are doing the [ESPN1 and ESPN2] multiplex so we want to make the coverage as robust and diverse as Centre Court coverage,” explains Reynolds. 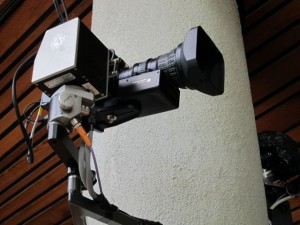 One of two robotic cameras from Camera Corps that will catch video of players entering Centre Court.

ESPN’s coverage will rely on two control rooms, with control room A dedicated to Centre Court matches and control room B playing a crucial role during week two when it is used for coverage on ESPN2 and then on ABC during the final weekend.

“The theory behind ESPN2 is that it will be a grounds pass with Court One in the background and the ability to whip around to the other courts and give a 20,000 foot view. It will be more dynamic and then ESPN1 and ESPN2 will push highlights back and forth.”

One bit of technology that will help with ESPN2 coverage of multiple courts will be Orad’s TD Control. The system allows the technical director or vision mixer to call up different video box compositions with the click of a button. As soon as the video box combination is selected and the video sources are assigned, the preview channel is instantly updated and with a single key stroke the layout goes on air.

“It puts nine direct, switched feeds in one image and then one of those images can be pulled up,” says Reynolds. 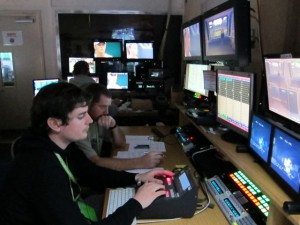 Replay operators are busy building clips and highlights to be shared across ESPN1 and ESPN2.

A single asset management system will share highlights and feature elements between the two control rooms along with Viz RT graphics. The production team will have 18 EVS servers at its disposal as well as 21 camera feeds as ESPN will have access to the BBC’s 18 cameras on Centre Court as well as six unilateral cameras, three of which duplicate BBC camera positions but give the ESPN team more control over the shots.

There is also a larger central record area, two brand new sets so that both ESPN and ESPN2 can be accommodated separately, and a wealth of integration across the two networks.

“Our edit suites, we now have three that are running 24 hours a day,” says Reynolds. “We have a 3D control room on‑line, as well.  And then to just help amplify that, we’ve had to increase our talent load, as well, because we will be servicing a heck of a number of hours, and as we often say, the video hospital never closes. We’re up and running all the time.”

The ESPN production team has been busy for months getting ready for Wimbledon, as the new sets were designed to give a completely fresh look to coverage (in many ways it evokes something that would be at home in Augusta as well as Wimbledon, featuring stained glass windows created by a local artist and a white, wooden veranda look). And despite all the prep work, tournaments like Wimbledon, where 128 tennis players hit the courts in the first two days, are always interesting.

“What’s unique about the majors is there is no rehearsal day so you don’t know the potential cracks until you are out there,” explains Reynolds. “We still aren’t doing anything different than we have previously done during the first week but we will start taking things a step farther.”

One of those steps, of course, is “Breakfast at Wimbledon” which will be hosted by Hannah Storm and provide backstory, atmospheric elements, and analysis.

“We want to use that window to gain excitement,” says Reynolds.

The most complex part of the production for ESPN will come during coverage of the men’s final. ESPN will air it live in the traditional “Breakfast at Wimbledon” format but it will also air on ABC stations on a delayed basis beginning at 3 p.m. EST and in a three-hour window. So if the men’s final goes five or six hours like the Australian Open did then the challenge will be to cut down the coverage. And there might even be the additional challenge of having the coverage on ABC begin while the final on ESPN is still finishing up.

During the Final both of ESPN’s control rooms in the Wimbledon Broadcast Centre will be in use, with one creating the live coverage being delivered to ESPN and the other packaging the delayed coverage that will be shown on ABC. One additional difference is that the ABC coverage will require 4:3-safe graphical elements.

“The intent is to feed segments for the ABC coverage to Bristol and master control but the fallback would be to play it back live to air at 8 p.m. [Wimbledon time],” says Reynolds

But that eventuality will be sorted out on July 8. For now the focus is on stage one…then the mountain stage…and then the final sprint on championship weekend.

“Through the fortnight, we will have first ball to last ball coverage,” adds Reynolds. “We are running with the BBC on all production decisions, which has been a great boon for us and a terrific cooperation with them as our partners running through this, and with the support of the All England Club, there are a great many innovations and opportunities to continue to broaden the scope of what this event represents.”