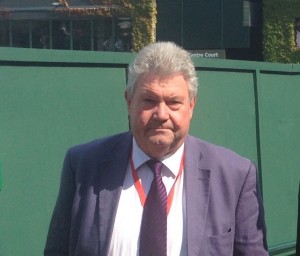 Mervyn Hall: “It’s been a fantastic job, and as with every job I have done I am sure I will miss it to some degree.”

As AELTC head of broadcast, Mervyn Hall has been integral to the fabric of the Wimbledon championships since 2002 – a period that has witnessed significant changes to, and expansion of, the tournament’s broadcast coverage. But in December last year it was announced that the 2016 championships would be his last, with former BBC Sport lead executive producer Paul Davies appointed to serve as his successor.

Whilst the Wimbledon association inevitably looms large over any resume of his achievements, Hall’s career stretches back over nearly 50 years and includes extensive experience in print media as well as TV and radio – most notably at ITN, where he was both News Editor and Sports Editor, and later at Reuters Television.

But although he is now preparing to say his goodbyes to SW19, Hall makes it clear during his end-of-week-one conversation with SVG Europe that he has no intention of retiring. “Absolutely not,” he confirms. “I won’t be doing as much as I do now – and certainly not as much travelling – but there are still a number of things I want to do…”

Turning first to the 2016 championships, what are the main additions to the broadcast and/or production infrastructure that you would highlight?

We have a new licensing broadcaster in the form of beIN Sports MENA. We have had beIN Sports France, but this is the first time we have the MENA operation as well.

There is also a brand new presenting rostrum up by the waterfall [at the top of what is commonly referred to as Henman Hill]. That is being used by ESPN for various day-time slots, the BBC for the nightly highlights programme, and then some smaller operations outside of that.

I would also highlight the addition of extra beauty cameras this year, including two units pointed on the practice ground and an additional camera on the North Concourse between Courts 14, 15, 16 and 17. These were installed by our long-time specialist camera provider ACS, and fit within our plan to add 2-3 new beauty cameras every year.

Isn’t this also the first year in which all courts are covered by broadcast cameras to some extent or other?

That’s correct. All bar three courts have three cameras or better, with six of these being Smart Production courts enabled by HawkEye. The remaining ones are conventional, BBC-directed courts, while a further three feature single locked-off high-definition cameras. [With regard to the three single-camera courts] the cameras are there partly for security purposes, but we decided we would make them broadcast-able cameras to allow us to capture any particularly important moments.

Last year witnessed a notable 8K demo from NHK at Wimbledon, but this year there is no such trial – or even any 4K production…

The 8K trial was carried out as a request from NHK, one of our oldest and most important clients. We would have done more this year if someone had come to us with a proposition, but we are not particularly keen to do it off our own back. I must admit that I am surprised that there isn’t any 4K production this year – it seems to be taking longer than I had expected – but what we have been doing is talking to some of the more established broadcasters about their ambitions for 4K so we know where we are with them.

What are your thoughts as you move into the final week of your involvement with the championships?

It’s been a fantastic job, of course, and as with every job I have done I am sure I will miss it to some degree. No doubt there will be a pang when the tournament starts each year, but I am not the kind of person who pines for a former job or wishes they had stayed longer. There are other things I want to do – some in sport and some outside of it. For example, I have an interest in a Washington, DC-based news agency, FSN – which is run by a colleague of mine from the ITN days, Simon Marks – and I will probably do more work for them in the future.

Your successor, Paul Davies, was announced in December and started working in February, so how have you been co-existing these past few months?

In essence, he has been looking at the wider picture in the longer-term, whilst I have been doing my regular job at this championship. Where the two things have interceded we have worked it out. He has also been paying close attention to how Wimbledon operates – it is an unusual place to work in some regards and is different from anywhere else you might go because of the culture and history of the place. Of course, he had been part of the broadcasting fabric here as executive producer for the BBC, but it’s quite different to then become responsible for it! But already he is coming in with lots of bright ideas and although I am sure he will make decisions in a different way to myself – we are different people after all – I know we share the same basic philosophy with regard to television.