The FIFA Women’s World Cup 2015 Canada may not reach the popularity of the men’s World Cup, but the production efforts by FIFA TV this year are proof positive that women’s football is on the ascent. “We have been really impressed with the whole team in Canada,” says Niclas Ericson, director, FIFA TV. “It has been a great collaboration between the network-operations centre, the host broadcaster, FIFA TV, and all our MRLs. The coverage and production have been first rate, and there has been a fantastic effort from broadcasters to promote this competition around the world.”

Says Dan Miodownik, project director for the host broadcast operations, HBS, “There has been a huge jump from 2011 [the previous Women’s World Cup] to 2015, this year’s event has been very good, and we are very pleased with how well everyone has performed and contributed to the success of the project. But we’ve been right at the edge, certainly, during the first five days.” 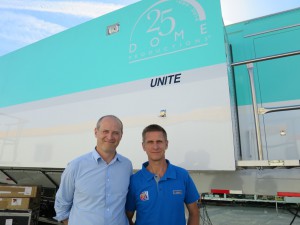 Dan Miodownik (left) , HBS project director, and Jorg Sander, HBS director of operations, in front of the Dome production truck being used to produce events out of BC Place in Vancouver

The main hub of FIFA TV activity is in the IBC compound across the street from BC Place, the Vancouver stadium that will host the final match on July 5 as well as other matches. The host-broadcast operation and six media-rights licensees (MRLs) share more than 14,000 sq. metres of space, a combination of OB trucks and cabins. FIFA’s appointed host-broadcast services provider, HBS, was onsite in the beginning of May and fully operational by May 31. “This is the biggest production FIFA TV has done for a FIFA Women’s World Cup so far, and it is having a big impact in terms of fan experience and broadcaster satisfaction with those extra cameras for matches and extra content from around the matches and teams,” says Ericson. “We are also happy to be working again with NHK on 8K productions to keep driving innovation in the broadcast industry with transmissions to Los Angeles and New York in the US.”

Miodownik adds that the goal is to hit the same standard of production and services that FIFA TV licensees have come to expect from the host operation. “It’s a lot of work to hit the same standard, and we have more than 17 suppliers and more than 600 people here for the multilateral services, plus the rightsholders, and everyone wanted to hit the ground running,” he says. “It’s been a huge challenge with a small planning team but a really positive experience.”

The IBC compound is where FIFA TV handles all of the incoming content: live match coverage from the six venues, match-day-minus-one activities (such as press conferences), translation services, and reports from six FIFA TV ENG crews in each of the cities hosting matches.

The multimedia operations are more integrated with the broadcast side of the World Cup than ever, with both sides sharing resources and all content created for the multimedia offering available as high-resolution files on the FIFA Max Server (onsite and offsite), the main repository for content that rightsholders access. A three-person team is dedicated to working with the EVS C-Cast system to create multi-angle clips.

“Multimedia is at the heart of all of our production planning now. So many people watch online these days, and we are reacting to that to make sure demand is met with innovative, quality content,” says Stefan Wildemann, senior manager, sales and distribution, FIFA TV.

He says FIFA TV learned a lot from the experience in Brazil, with the challenges of delivering content from venues spaced out across a large area. “As a result, things are running well here, with a great deliverable, for example, to Dentsu and DirecTV, including VOD and multi-angle content and a great range of stats.”

Changes from 2011
Along with the enhanced multimedia and the FIFA Max server offering, which didn’t even exist in 2011, is the presence of six ENG crews, one located in each of the six cities with venues. And those additional services are making a difference for MRLs and football fans alike.

According to Alexandra Knoke, senior manager, TV event operations, FIFA TV, the advances from 2011 have been spurred by surging interest in women’s football around the world and are, strategically, part of FIFA’s work to promote it.

“The FIFA TV ENG crews have been outstanding, delivering so much great material at a fast pace for so many teams,” she says. “It is no easy task to pull all that content together in the right way under that time pressure, but they have been doing it from the start, helped by cooperation from the teams and member associations. It is a crucial part of the service we provide for MRLs.”

Miodownik credits those crews with being able to pull off a major accomplishment as they cover four teams at a time in the early days of the tournament.

“It sounds easy, but it’s not: they have to cut content down and get the right content with the right metadata for four teams a day,” he says. “But it has run very seamlessly, and they have been turning around a lot of strong content.”

The teams are using Panasonic cameras and GoPros for acquisition and EVS Xedio Dispatcher to get the content rough cut and ready for transfer. Xedio Dispatcher runs on a laptop, detects connected devices, and allows immediate media browsing for clip selection, rough edits, and logging. The ENG crews use Aspera file-transfer technology to move the AVC Intra files and metadata directly into the FIFA Max server, where they are technically validated, tagged, logged, quality-controlled, and published.

A key part of the process is telco services, including 100-Mbps circuits at team hotels, provided by Bell Canada. “We have had great support in terms of connectivity and telecommunications here in Canada, which has given us the capacity to keep things running smoothly,” says Wildemann.

Match coverage is also greatly enhanced compared with 2011. Upwards of 24 cameras are covering matches. FIFA’s goal-line–technology partner is Hawkeye, a change from Brazil. The broadcast process has worked well, with the added bonus that Hawkeye “box cams” are available as an output for match directors.

“The GLT system has been working well, and FIFA is happy to be innovating with technology in this way to improve the match experience for everyone,” adds Knoke. “With so many cameras per match, we know we are providing a great experience for broadcasters and audiences around the world, on a par with European league coverage, for example. We felt it was vital to give this tournament the best production we could, and that has been appreciated by the match directors.”

Another important addition is the Additional Clips Compilation channel, which gives MRLs a huge range of material from pre-, during-, and post-match content.

“This proves extremely useful for broadcasters trying to cover as much of the action as possible, and we know it has been great to have for our MRLs,” says Knoke. “Many more broadcasters are giving more time to the Women’s World Cup, and so we’re more than happy to give them the quality content they need to fill that air time.”

Remote-production vehicles from Dome Productions are playing a big role, as they are onsite at each venue for the match production. One interesting aspect of the production has been the confluence of cultures, with German, French, English and Canadian production and technical teams are working together and needing to understand the subtle and sometimes not so subtle differences in work styles.

“You cannot underestimate cultural differences,” says Miodownik. “You can bring together a five-star truck and five-star production team, and there will still be things to work through, be it comms or camera shading. It’s been a lot of preparation and hard craft, but it works, and it has been done in great spirit. And, when you look on screen, you see a five-star product.”

The match schedule has presented some challenges for everyone; back-to-back matches with just one hour between games has put pressure on the HBS operation and on the MRL’s unilateral activities.

“The decision to provide a new feed, the Additional Clips Compilation was correct,” says Miodownik, “It gives MRLs access to all kinds of content before, during, and after or between the matches, including interviews, match clips, dressing rooms, team arrivals, press conferences, etc. We are doing on one feed what we managed on three in Brazil. You can’t keep everyone happy all of the time, but I think we’ve struck the right balance, and it’s been a big hit with the MRLs at the IBC as they look to fill the gap between the matches with strong content.”

Bound to get bigger
Given the production for this year’s event, it is pretty clear that, like most productions, the next one, in France in 2019, will be bigger. The time zone will be much friendlier to European nations, making it more likely they will have a larger onsite presence. And there will be more advances in multimedia services and, most likely, UHD and 8K, with NHK expected to be broadcasting 8K signals by 2019.