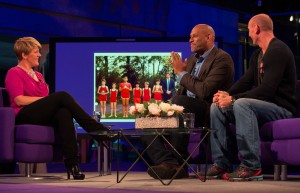 After just one year of operations, BT Sport has made a significant impact on football coverage in the UK. This coming season it will screen 38 top, including 18 first picks, live English Barclays Premier League matches, among them Louis van Gaal’s first league game as Manchester United manager when the club takes on Swansea on 16 August.

In its first season, average audience for Barclays Premier League was 770k: 27% higher than ESPN in season 2012/13. Meanwhile, its Aviva Premiership Rugby rugby has been a success story – it achieved a 40% rise in television audiences year-on-year in its first season on BT Sport.

Alongside the Barclays Premier League, BT Sport has the rights to also show around 500 exclusively live matches from Germany’s Bundesliga, France’s Ligue1, Italy’s Serie A, the Scottish Professional Football League and the Portuguese Primeira Liga. And with such an extensive menu of matches on offer, the broadcaster is determined that the output is made available to as many sports fans as possible.

“We are simulcasting all the BT Sport channels on our app,” explains Jamie Hindhaugh, the channels’ chief operating officer. “And we provide exclusive digital streams for certain content. That covers all our sports output, enabling us to provide viewers with coverage that we might be able to place on the main ‘traditional’ broadcast channels.”

As an aside, Hindhaugh says that it will look to add extra camera angles and other visual content around MotoGP and WTA coverage, which are scheduled for BT Sport programming in the months ahead.

For the upcoming season, BT Sport will be using between 14 and 28 cameras depending on the match being covered. “We treat live sports coverage as live,” states Grant Best, BT Sport’s senior executive channel producer. “First and foremost, we want to show the very best live shots and we will use the cameras for that purpose.  Replays give you options – and we like to think we use those options very well.”

Best goes on to say that BT Sport introduced a screen on screen experience, known as BT Box, which means directors never have to miss any live play. It means that during a replay, viewers can still see what is going on in the live environment.

“In my opinion,” says Best, “it is a fantastic addition to live coverage.  And we will be enhancing that technology when the new season kicks off – but you’ll have to wait until 16 August to see what it involves.”

With broadcasters looking at the possibilities surrounding 4K, BT Sport took an early lead by transmitting the world’s first UHD live rugby match – a Saracens versus Gloucester game – from London to Amsterdam during IBC 2013. The match was shot on three Sony F55 4K cameras fitted with Sony CA-4000 Fibre Transmission Camera Adaptors, which carried the images to the 4K-capable Telegenic OB truck.

“We are looking at how we can utilise the 4K technology to enhance our HD coverage of matches,” adds Hindhaugh. “To that end, we trialled 4K TV with the BBC for the World Cup Final at the BT Tower a few weeks ago and it’s something we’re looking at with interest.”