A new 3D camera for the sport TV market is available courtesy of the Meduza Titan, a single HD camera with 1080p dual sensors that weighs only3.5 kilos. Chris Cary, CEO of 3D Visual Enterprises, the UK parent company of Meduza Systems, believes the camera fills a void for those looking create 3D content for TV broadcast. 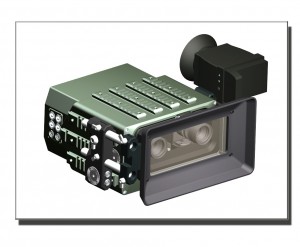 The 3D Titan camera from Meduza Systems weighs only 3.5 kilos.

Featuring two 1080p CMOS sensors, TITAN is capable of a full range of frame rates, from 24 fps to 120 fps in 10 bit, and has fast, fully motorised inter-axial (the distance between the lenses) and convergence. Convergence is accurate to 1/1000 of a degree and the inter-axial to 1 micron and Meduza can also provide motors for Iris and focus control.

The company says that all of the control systems are integrated inside the camera so setup is also optimised for shooting in the adverse weather conditions that affect outdoor sports productions.

“We had expected theatrical productions to continue being the driving force for the growth in 3D equipment until late in 2012,” added Cary. “Our plan has always been to release a 1080p only camera system for television but it was originally scheduled later in our release cycle.”

Cary sites the huge effort being made by Sky in the UK and other broadcasters to unlock the possibilities with 3D for broadcasters. The Titan and its big brother, the modular Meduza MK1 (recently launched at IBC), are not intended to replace rig systems but are completely complimentary.

Testing by 3D Visual Enterprises in the UK, has included mounting the Titan on top of traditional broadcast cameras to determine how positioning and framing can be shared, but with 3D controlled remotely.

TITAN is priced at $55,000 US and can be ordered with either C mount or the new Meduza mount for the Meduza matched pair prime lens series (Delta 4KS3D). Pre-order customers can expect delivery of the TITAN in late December.