Moving past lockdown in Italy: Views of OB providers (Part 2)

Italy is now into phase 2’ of its post-lockdown plans and although an official confirmation on a restart date for sports matches is still to be decided, the desire to return to normal is strong and everyone is preparing, studying and implementing projects on how to secure the crews for events that will be played behind-closed-doors.

Everybody agrees that different production models will be required according to events, and a great deal of collaboration with broadcasters, rights holders and sports leagues is required to quickly give life to concrete projects.

Our idea is to understand how the OB players have reacted to this long moment of crisis and what counter measures have been implemented to get ready for the restart of sports. In the first part of this series we spoke to Cinevideo and Opera BVS: in this second part of the story we speak with Videe and Global Production.

Videe in Pordenone has never stopped completely. In fact, it has continued to produce ‘Supervivientes2020’ in Honduras, which sees a TV team engaged in a safe production hub, isolated from the metropolitan area, under constant collaboration of the Bulldog client and MediasetEspana, in total isolation.

In the last week of March, they were allowed to resume television activities because of the public interest connection with news and information – and the TV set with anchor Alessandro Cattelan reopened in Milan. 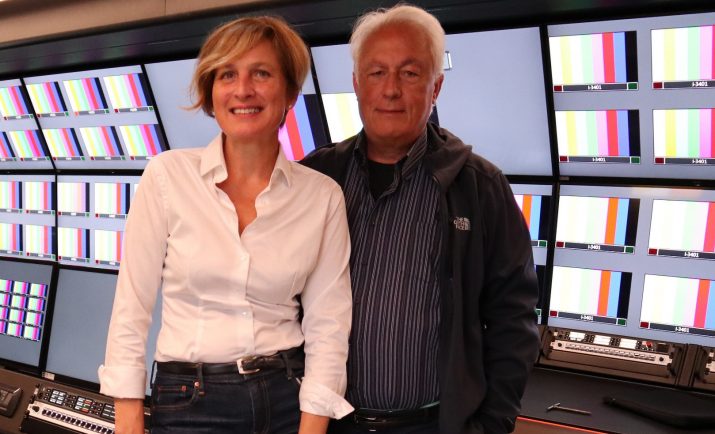 Videe CEO and founder Paola Montanari told SVG Europe: “We had to invent, in a very short time, appropriate operating methods to ensure total safety for the staff, with devices and precautions, the presence of a medical guard and surveillance towards the adoption of medical facilities.

“Different production methods were created, increasing the use of virtual reality and use of certain devices, such as headphones and intercoms becoming personal.

“Apart from the halt of sports TV shooting, as happened throughout the world, our ‘safe entertainment sets’ and the ‘health bubble’ in Honduras (where all the staff of the technical, hospitality and artistic teams live in a controlled area), have allowed us to build a great deal of expertise on this pandemic that we have immediately reflected in the whole company.”

Meanwhile, the re-start of sport competitions is scheduled for the UEFA Champions League final in Istanbul on 30 May 2020 and Videe will be engaged in this event with the official production launch in sport of its reference mobile vehicle, OBX, which operates with 4.0 technology and with all on-board activities remotely controllable.

Company president and founder Bruno Mercuri said: “Our OBX 4K HDR UHD flagship mobile vehicle, presented for the first time at IBC2019, boasts many important pluses thanks to our long experience. These include Atmos audio, the communication section, energy management, operating spaces and many other on-board reference technologies: it is a very powerful machine, which we’ll dedicate to an important event around which 85 people will work.”

Videe has been ever-present in Formula 1 since 2013 and for five years the production has relied on remote production for the Spanish market, with Telefonica, which will start with the Austrian Redbull GP on 3/5 July, most likely behind closed doors.

Bruno Mercuri said: “In anticipation of the resumption of sports production with the use of OB vans, we prepared in time with sanitisation through specialised companies and continuous updates on safety with the RSPP (security and prevention service responsible manager).

“Furthermore, in collaboration with customers, we are evaluating a redefinition of the operating spaces within the mobile vehicle with different planning of the internal layout. Deconfiguration is not mandatory for us as for some customers already operate in remote production and locate production sections in a different, unconcentrated way.

“The idea that we can operate safely even without reducing staff is important: we certainly do not want to debase the show by packaging it with technical means and inferior staff, but to maintain its potential and high quality.”

Constantly in contact with Italian Civil Protection and the Ministry of Health to check any protocol changes, the Italian operating team of the Euro Media Group, Global Production, was certainly not caught unprepared by the pandemic.

In addition to having equipped all staff with the necessary PPE, sanitising gels and ozonisers on board mobile vehicles, it produced three official documents to re-start safely with Serie A football and sports TV production in general. 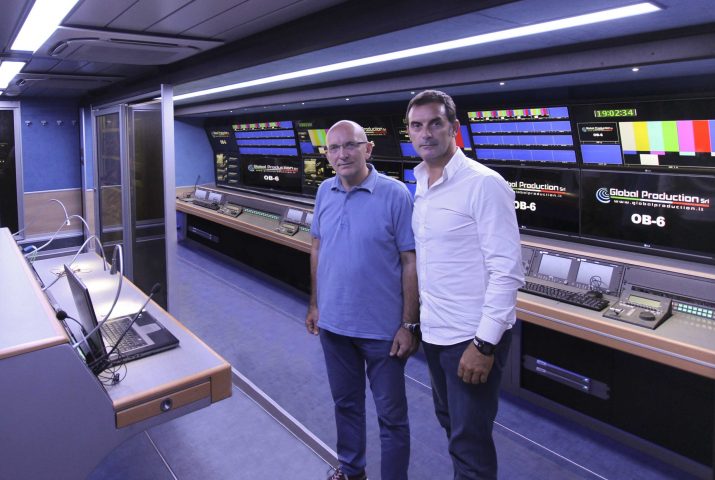 The first indicates the shared internal protocol for regulating measures to combat and contain the spread of the virus in the workplace. The second lists the anti-contagion behavioural instructions for freelancers and external suppliers involved in the productions.

The third analyses and assesses biological risk and forms of prevention and protection in collaboration with the ASL Città di Torino and the HR doctor. All the technical managers of the OB vans, reception areas, warehouses and studios have been equipped with a thermal scanner.

“In addition to the strict safety protection measures and pending confirmation of the timing of the championship’s resumption,” said co-CEO Davide Furlan, “we are in constant contact with the Football League, the TV rights holders and the major broadcaster to refine protocols and policies and we’ll offer a new enrichment of the Host TV product in order to mitigate the diminished spectacle due to the absence of fans in the stadiums.

“There are many proposals under consideration and these include the adoption of high-quality mini cameras, new elements of centralised graphics such as virtual beauty shot and/or virtual LED walls, AR and VR integrations and mixed techniques and more.”

The common trend tends to adopt dimensionally lower production standards, in order to better distance the operators on board, for a total of 14 or 15 professional operators.

The adoption of individual face shields and personal listening headphones is certain as well as the engagement of larger vehicles and the decentralisation of some sections and production workers, such as camera control and slow motion, which can be moved to the TV compound or other nearby location — or even connected to the production facility in Turin and Cologno Monzese, for a mixed and on-site remote production.

“At Global Production, in addition to fielding 4K UHD HDR mobile trucks that are certainly ‘top of the line’, we will also engage our latest generation of remote production devices, at different levels, depending on of the event and we will also dedicate a smaller vehicle to be used alongside the main OB van to better distance some of the technical staff,” said Furlan.

Stefano Bianco, co-CEO of Global Production added: “We have poured in the competence of the EMG group and invested where it is truly strategic — that is first of all in the safety of the working staff. This is a must for us and the approach to the re-start requires a mix of indispensable skills among broadcasters, sports leagues and us, side by side.

“In Global we know sports, supply chains, markets, realities and needs very well. Sports production in Italy will continue to generate profits: starting again and as soon as possible is really a requirement for the whole industry.”