MTGx: “Gamers used to be nerds. Now they are rock stars”

eSports has evolved beyond the realm of niche entertainment and cemented itself into the mainstream. What took it so long?

“Digital gameplay is already more popular as entertainment than music or print and it will soon overtake film,” claimed Arnd Benninghoff, CEO of eSports and gaming group MTGx in a keynote to IBC’s eSports conference theme. “That’s why we believe gaming is the next big entertainment and why we want to be an active player.”

In 2015, the Stockholm-based multi-territory commercial and pay-TV broadcaster acquired a 74% 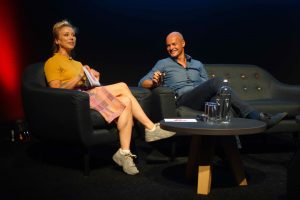 In its last quarter to July, eSports accounted for $46.3 million of MTG’s digital revenues, a 41% increase over Q1 2018 and representing over 41% of total digital revenues. This was driven by more than 60% growth year-over-year in revenue from ESL and DreamHack.

“eSports has fuelled our digital transformation,” said Benninghoff. “ESL is the Champions League of eSports brands. DreamHack is like Coachella without the drink or drugs.”

He likened multiplayer online battle arena game DOTA (Defense of the Ancients) to “playing chess on acid. I can’t pretend I understood it when my nephew first took me to a DOTA event but you only need 15 minutes to understand the rules and the super-excitement of the fans was extraordinary.”

“ESL is more and more about owned and operated events and so we continue to restructure, streamline and focus our resources on events where we can scale our media and sponsorship deals in order to maintain our market leadership and build an eSports megabrand.”

It also launched a $30m (€25.3m) investment fund to target US and European online gaming companies. Benninghoff said MTG intends on investing in five to 10 companies annually over the next three years.

He described a virtuous circle in which amateur eSports players were vital to growing the whole ecosystem. “If you invest in grassroots then you can identify new games which may become popular ahead of the curve and you can identify new esports stars. Meanwhile, amateurs get the chance to upload their own game play and potentially gain followers and eventually to participate in an eSports pro team.

However, he did have these warnings for other media companies seeking to tap the phenomenon. “eSports is probably over hyped and you don’t make healthy decisions in a hyped market. It is also still in an experimental stage and you can underestimate how long it may take to attract eyeballs. If you mess with the community and they sense you are unauthentic or you lack street credibility, they will leave,” he added.

“One difference to traditional sport like football is that each game, like DOTA 2 or League of Legends, are so different from each other they attract totally different communities.”

Bridging the worlds of online streaming and mainstream TV

Benninghoff feels it important that eSports content remains free and distributed on as many platforms as possible. “I don’t believe we are ready for a SVOD business model yet,” he said. “We need a long tail of sponsors and to get those we have to attract lighthouse investments from major brands.”

A key one for MTG was convincing Mercedes-Benz to invest heavily last year in a long-term ESL event sponsorship deal. “We were able to do this because eSports enthusiasts are 18-30 year olds,” said Benninghoff.

“Twenty years ago, gamers were considered nerds. Now they are the rock stars.”

Sky and ITV are among investors in GINX eSports TV which was described by Michiel Bakker, founder and CEO, as serving to bridge the worlds of online streaming and mainstream TV by being a linear channel dedicated to eSports. It is on track to reach 75m by spring 2019.

“It is shocking how big eSports had to become before it popped up on the mainstream radar,” he said. “eSports has been around for 15 years and it was enormous seven years ago. It’s astonishing it took so long to get noticed but there was a preconceived notion that this was a pursuit of geeks and therefore not relevant to the mainstream. That has completely changed.”

Christopher Mead, senior director of partnerships for EMEA at streaming platform Twitch echoed this by saying the user-generated component of the sport went undervalued. “eSports’ success is in large part because of the ability for players to broadcast gameplay on vehicles like Twitch from their bedroom to one or one hundred or many hundreds of thousands of viewers concurrently. They are the content creators and have a vital role to play.”

“There is the vast base at home watching live on platforms like Twitch; there are those at the event itself; and the performing pro player themselves on stage who we consider to also be an audience. The interaction between these groups by realtime function like chat is what drives the whole passion for the content.”

Market revenue for eSports is forecast to reach U$1.65 bn by 2020, according to Statista, and eSports has a recently confirmed place at the 2022 Asian Games in Hangzhou, China edging one step closer to full Olympic recognition. With growing advertising revenues, a global online audience of over 300 million, and construction of dedicated stadiums, pro players are competing for multi-million-dollar prize money.

“The market growth of eSports has been nothing short of incredible, and it hasn’t even reached its full potential,” added Mark Hilton, VP live production for Grass Valley. “eSports is just starting to come into its own in terms of professionally produced content.”