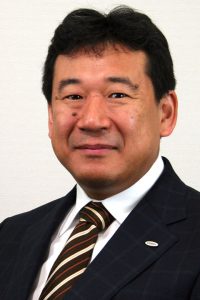 Designed for the hybrid world of analogue and HD-SDI/SDI-SDI broadcasting, the instrument set the style for a range of compact products right up to out current 4K HDR flagship LV5490.

At NAB this year, we mark 65 years of success by introducing new instruments developed for the rapidly upcoming world of video-over-IP. Leader has helped many customers manage their migration from analogue to digital, standard definition to high definition, standard dynamic range to high dynamic range. They are now looking to Leader as they begin their next migration from SDI to IP.

Leader was initially registered in May 1954 as Ohmatsu Denki Company Limited), rebranding in 1966 to Leader Electronics Corporation. The name was chosen to reflect the management’s awareness that the electronics industry was developing very quickly and with almost limitless boundaries. The company’s initial role was primarily to serve the industrial and consumer equipment manufacturing sector where test and measurement where essential elements of the production process.

Leader has served the broadcast industry around the globe with high-reliability electronic test instrumentation for many decades. Leader instruments are also used by many of the world-leading manufacturers to ensure the correct alignment of products such as broadcast cameras. Less than 0.1% of all Leader products made are ever returned for warranty repair or adjustment. Only the finest parts are used for optimum reliability. At each production run, sub-assemblies are separately tested before they are integrated into the finished product which is then further tested. 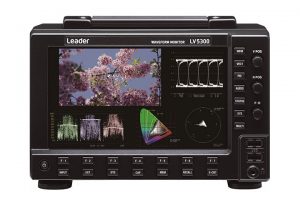 Notable features introduced by Leader over the years have included multiscreen viewing, the LV5490 allowing an unsurpassed 15 user-configurable sub-displays via its DVI-D and 3G/HD-SDI rasterised external-monitor output and even on its internal Full HD LCD screen. Another innovation is the Leader five-bar display which enables the simultaneous observation of luminance, green, blue, red and composite video levels within the 0 to 100 range plus overshoots and undershoots. Yet another is Leader’s proprietary equivalent cable length measurement facility which is particularly useful for safeguarding against excessively long SDI cable runs.

Audio test features include hard-centre and phantom-centre surround sound display plus the ability to measure lip-sync timing offsets, a vital concern given the delays introduced by many modern digital video processors.

Being compact and capable of working on battery power, Leader instruments such as the LV5330 be-came popular among camera production crews as well as engineers. In 2007 we introduced CINELITE as an on-screen measurement option offering additional measurement functionality to Leader HD and SD monitors. It rapidly became one of the mostly widely appreciated features in the company’s history. CINELITE allows on-picture measurements of video levels in RGB percentage, Y percentage and f-stop readings, bridging the gap between cine and HD production measurements.

For the first time, production staff could point a cursor to any position on their picture to get instant measurements in f-stops (or percentage) and review the material that is actually being recorded. Final adjustments of lighting conditions, filtering and iris adjustments could (and still can, it is very much a current product) be made using familiar f-stop based evaluation techniques.

CINEZONE which followed in 2008, simplified luminance measurement, enabling programme-makers to evaluate their composition without having to resort to unfamiliar technical displays or measurements. Conventional waveform measurement is limited to one full line of video while CINEZONE offers real-time pixel accuracy across the entire image. It is especially useful during pre-shoot lighting configuration, allowing operators to confirm dark (5 percent luminance), mid (45 percent) and bright (80 percent and higher) image areas quickly and accurately. CINEZONE augments the full range of troubleshooting functionality found in Leader test instrumentation and allows a single unit to support pro-gramme-production staff as well as their technical-support colleagues. Integral to CINEZONE is CINE SEARCH which displays a specified luminance level within 0.5 percent accuracy using green on an otherwise monochrome-greyscale picture display.

One development area we carefully avoided was the trend towards lightweight product construction. Leader products are built to last even in the rough and tumble of mobile production flyways. Where pocket portability was a requirement, in studios, apparatus rooms or on location, we long ago introduced the ability to interface wirelessly with the PDA precursors of today’s smartphones. Operators in production galleries, outside broadcast vehicles and editing suites generally prefer to view test and measurement displays on large screens, creating strong demand for dedicated rasterizers and of course for the rasterizing output available from many of our portable test instruments.

Internet Protocol networking has long been used for transporting files within a broadcast, production or postproduction site or over practically unlimited distances from content creator to playout site. Many broadcasters have now extended their IP activity as the basis of video-on-demand services which give viewers the freedom to watch programs days or weeks beyond the original time of transmission. The next phase is IPTV streaming which allows a television or radio channel’s entire output to be distributed live via the Internet. It is a logical service to offer given that practically every television receiver on the market today has a direct Internet port.

Broadcasters will initially deploy a hybrid infrastructure. The feedback we receive from our customers confirms that they will want to handle SDI and IP in a single instrument rather than having to operate four separate units. Our new LV5600 portable waveform monitor and LV7600 rasterizer address this requirement, providing both operational and engineering staff with common display interfaces irrespective of whether the source signal is SDI or IP. Also new are the Leader LV5300 portable waveform monitor and LV7300 rasterizer which can display 4K, 3Gx4-SDI and 12G-SDI signals, including 12G-SDI eye pattern.

These and other near Leader products will make their world-first showing at our 2018 NAB Show in Las Vegas.

Leader is exhibiting on booth C8008 in the Central Hall.