The trade event that began in 1902 and was held at the YMCA in Baltimore as an expo for pianos has rebranded itself as the world’s largest trade-only event for the music-products, pro-audio, and event-tech industry.

In doing so, the Winter NAMM Show (24-27 January, Anaheim, CA, Convention Center) has elbowed its way into product and technology categories traditionally covered by other shows, such as PLASA, InfoComm, and the AES Show, which relinquished its claim as the home of the pro-audio–oriented TEC Awards program to the Winter NAMM Show in 2011.

The broader coverage reflects the blurring of lines between music production, live sound, event production, and media production in general. It has also made the event more attractive to a wider array of exhibitors, including many in the broadcast-sports arena. 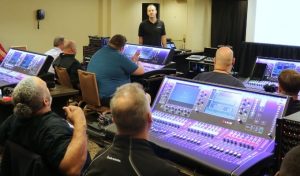 Although some SVG sponsors are longtime exhibitors at the NAMM Show, others on the sports production side have come to see it as a positive venue for a wider range of products and platforms, including intercom system manufacturers Clear-Com and Riedel and touring- and installed-sound developer Bose Professional.

Audio-console companies like DiGiCo, whose parent company also owns broadcast-console brands Calrec and Solid State Logic, bring links to broadcast to a show once regarded as a drums-and-guitars expo. So have microphone companies like DPA Microphones and technology companies Audinate and Focusrite, all of which have extensive broadcast-facing divisions and product lines.

“It’s not a broadcast technology show by any means, but they attract the same audience and markets,” said Jack Kelly, CEO, Group One Ltd., which markets DiGiCo, Calrec, and Solid State Logic consoles in the USA. “When you see the growing number of pro-audio products aimed at the podcasting sector [at NAMM], like USB microphones, you’re seeing the next generation of broadcasters; they’re like the people who were building personal-recording studios in the 1980s and became the music producers of today. So, even if there’s no overlap, broadcasters should pay attention to NAMM. And, in terms of live sound, there’s no other show that really comes close anymore.”

The expo’s conference programs also have extended their reach, covering a wide range of pro-audio topics. The TEC Tracks program encompasses music production, technology, business, and history and brushes against broadcast-related topics, such as loudness management, IP for audio, and control-room design.

A parallel conference of panels is produced at the show by the Audio Engineering Society. The [email protected] Pro Sound Symposium will push deeper into the technical side of pro audio, covering such topics as digital audio networking (with content on Dante Level 2 certification and sessions spanning network ownership, AVB, MADI, AES67, and AES70 standards), line-array loudspeaker systems, live-mixing consoles, entertainment wireless systems, in-ear monitoring, and a series of sessions on sound-system measurement and optimization.

(In December, NAMM and AES announced a three-year agreement extending the [email protected] Pro Sound Symposium, which debuted at last year’s NAMM Show, through the 2021 edition.)

Attendees at this year’s event can expect to see an array of platforms and technologies that may find their way into broadcast applications, as well as into live sound within sports venues.

The Winter NAMM Show (a smaller version is held in Nashville in the summer) is increasingly being used to launch pro-audio products. For instance, Electro-Voice will debut a flagship wireless-microphone system. Yamaha Commercial Audio will introduce its DZR Dante speaker line and Dante-enabled L2 switches. Such introductions will bring installed-sound products to the convention center’s new North Hall, which was opened last year specifically to house pro-audio exhibitors; Yamaha audio-production and live-sound products, such as its RIVAGE PM digital audio consoles, are already showcased there.

“The number of pro-audio companies showing at NAMM has really grown,” said Kelly. “That’s because the show has paid attention to how the business has changed in the last decade or so.”