At IBC NEP Group showed a new “intelligent outside broadcast” (iOB) for remote production where the director doesn’t want to be remote, but the production still wants to benefit from the savings of having all the processing done in the cloud. Certainly, in the Netherlands, where NEP developed iOB, directors prefer to be at the stadium rather than close to the MCR. 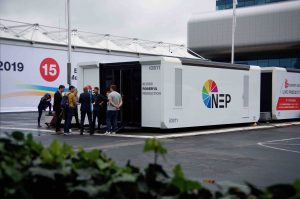 The pod, which is delivered to a venue on a flatbed trailer, works as a remote production gallery. Indeed, it is almost identical inside to the production control rooms NEP uses in Hilversum, to where iOB links to as that is NEP Netherlands’ cloud centre. It could also work with NEP Group’s cloud locations in Sweden, Norway and Australia, and there are plans for further locations in future.

This is where its Centralised Production concept comes in to play, with all the resources available to be shared across productions as necessary, to maximise their usage. This way a production will only need to buy in the resources they need, such as audio or shading, as they need it.

“You have all the power and flexibility of the OB van, without having to bring everything to the location,” explained augmented reality engineer, Vince Westbroek, who was setting up for iOB’s first ever broadcast at IBC with coverage of the IBC eSports Showcase. This was done as a seven-camera augmented reality production. The cameras, audio, intercom and other feeds were connected via fibre from venue boxes to Hilversum, 30km away, with only a small number of creative staff in the iOB gallery.

Two of the units can fit on a standard flatbed, which means there can also be a separate pod for customer or client entertainment/viewing or for a studio. Or the pod could be twice as long.

When it is expanded, iOB becomes an 8x6m production control room almost identical inside to the PRCs NEP uses in Hilversum. It just has the control surfaces, such as a mixer panel, and monitor wall rather than racks of equipment. Most of the single rack is taken up with air conditioning, power and WiFi. Importantly, it also comes with a coffee machine.

NEP says “it is a more intelligent way to use resources that makes it viable for small and midsize productions,” as it is “significantly more economical than a fully equipped OB truck.”