New cameras get a bit of that 4K magic

There is set to be a huge increase in the number of 4K broadcast cameras this year, with introductions from AJA Video Systems, Blackmagic Design, JVC and Panasonic. Part II of David Fox’ analysis of new camera systems takes a close look at the Blackmagic Ursa and Studio Camera models – and plans by Arsenal FC to go Ultra HD, as described by Production Manager Petro Mnych.

Many of the new 4K cameras being launched this year are more suited to drama production than to sports — but the same was said of Sony’s F5 and F55, which have become the mainstay of current Ultra HD sports experiments.

From tiny action cameras such as Panasonic’s HX-A500 and JVC’s GW-SPLS1 prototype, to high-speed units, such as the Phantom Flex4K and For-A’s FT-ONE, there are now UHD models for most needs, even if some compromises still need to be made: particularly when it comes to depth of field, as almost every UHD camera uses a Super35-size sensor. 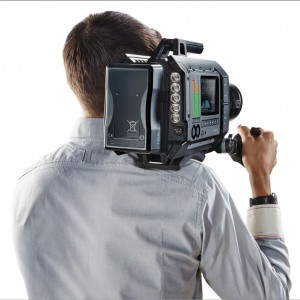 In this regard, probably the most interesting of the new introductions is Blackmagic Design’s Ursa, which can come with a smaller, broadcast sensor. It not only has the user-upgradable sensor and lens mount, along with a larger-than-normal 10-inch fold-out viewfinder and a multi-screen user interface design that should make it simpler to use, it is inexpensive too; the Ursa EF model will retail for $5,995 (about £3,800/€4,500 + VAT), while the Ursa PL will be $6,495 (about £4,100/€5,000 + VAT), with both expected to ship in July.

Importantly, for sports users, the Super35-sized Ultra HD (3840 x 2160) image sensor has a global shutter (so no CMOS sensor rolling shutter effects). The sensor is also easily replaceable (just four bolts), together with the lens mount, which can be EF or PL, or even, with a broadcast video sensor, a B4 mount.

The Ursa Broadcast B4 model should be available late 2014, and will have a B4 lens mount and either a four-thirds-size (13mm x 7.3mm) or one-inch sensor — which will make it easier to keep fast moving objects or players in focus, although the 4/3-inch sensor is still about twice the size of current 2/3-inch broadcast sensors, so depth of field could still be an issue.

There is still doubt about the exact specifications of the B4 sensor, because: “We are still in the process of finalising the sensor specification, so at present we haven’t yet confirmed the sensor choice,” said a spokesperson. It is not certain if the sensor will even use a global shutter.

However, being easily upgradeable means Ursa is future proofed, so that while the initial sensor will only go up to 60p, the camera has been designed with enough space for better cooling (using a liquid cooling system), which will allow higher frame rates when sensors emerge to offer them, while keeping the chassis cool and the fan quiet.

It also has dual CFast 2.0 card recorders for recording at up to 350MBps, with support for ProRes HQ, ProRes 422, ProRes LT, ProRes Proxy recording at resolutions up to Ultra HD, and 12-bit lossless compressed CinemaDNG Raw. The SATA 3 based CFast recorders are faster than currently available cards, giving a further level of future proofness.

“Our goal when developing the Ursa was to build a camera that had all the cooling capacity for higher frame rates, and a large on-set monitor as well as built in scopes so you had everything you need built into the camera itself,” said Grant Petty, CEO, Blackmagic Design.

Cameras for Studio too

Blackmagic has also gone Ultra HD with its compact new Blackmagic Studio Camera. However, both the HD and 4K models have rolling shutters, which will limit their appeal for a lot of sports coverage, although their low price (just $1,995 for the HD model available now, and $2,995 for the UHD version shipping in June), and amazingly compact bodies could make them very suitable for remote studio or other applications.

They are claimed to be the world’s smallest live broadcast cameras — with the largest viewfinders. The design is essentially made up of that 10-inch 1920×1200 screen (with fold up sun shield), with a micro four-thirds camera sensor and add-on B4 (or other) lens mount fixed to the front. Their size will mean a smaller truck will be able to carry more cameras.

As they are designed for live production, talkback, tally lights and bi-directional optical fibre connections are built in. To allow independent operation with only a single optical fibre cable, the camera includes a 4hr battery — enough power for use on most live productions plus setup time before the event starts. It is also useful if power connectors need to be swapped during a production, as the camera will still work.

The cameras can also be remotely controlled from an ATEM live production switcher via the SDI connections (the 4K camera uses the new 12G-SDI standard, as does the Ursa). All camera settings can be controlled remotely, including colour and lens control.

One company looking at going Ultra HD for its productions is London-based Arsenal Football Club, which has been trialling Blackmagic’s 4K Cinema Camera and hopes to purchase two or three new cameras before the team plays a pre-season friendly in New York at the end of July.

“We’re looking for lightweight, reliable, relatively easy to use cameras — we have multi-skilled crews — that should be fairly small, for shooting in confined places and to be less intimidating to players,” explained Petro Mnych, production manager, Arsenal Media Group.

“If we can find a 4K camera for a reasonable price, we’re looking at acquiring in 4K, even if we don’t use it initially, for future archive use. If we’re doing something special, we can put it in 4K mode and know we are good going forward.”

It used the 4K Cinema Camera for interviews, GVs and ENG video, including as a second camera to see how it compared to its current HD cameras (a PDW-700 XDCAM, two Canon 5D MkIII DSLRs, and two Sony EX3s). “The pictures out of it were very solid and looked great,” said Mnych. “It’s not the greatest in low light, but if you do get the lighting right, the pictures were very sharp. The workflow is great for us, because we’re all Mac and ProRes.” However, its design means it is better suited to more static use than ENG (as it requires a separate rig for shoulder-mounted use). “It’s quite heavy, not the most straight forward camera for point and shoot, but for a more considered piece it’s fine.”

He now hopes to get an Ursa on trial. “It’s staggering they can make them for that price. They’ve given the industry a bit of a shake up.” He has also looked at the Arri Amira and is interested in AJA’s Cion, but which cameras Arsenal buy will depend partly on what will be available before the start of the 2014/2015 season.