When Marco Lopez was named CEO of ChyronHego on January 9, former CEO (and now Executive Chairman of the Board) Johan Apel made it clear that sports is a priority and that the company has made tremendous inroads in the market. Now it is up to Lopez to build on that success and also oversee a company whose tools will be at the forefront of a transition to IP, virtual machines, and even the use of artificial intelligence.

“ChyronHego has a great heritage,” says Lopez. “I love being part of a company that has such brand recognition. Especially in our industry, the graphics operators are called Chyron operators even when it is not the function they are doing.” 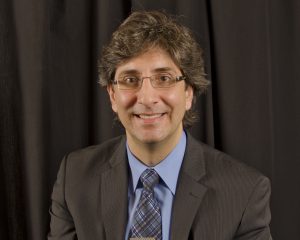 ChyronHego’s Marco Lopez: “The fundamentals of the [video-content–creation] ecosystem are still very sound and expanding”

In the announcement of his appointment, Lopez made mention of the industry’s rapid shift from proprietary hardware to software-based workflows running in commodity IT-based environments. He said that, with strategic solutions like the CAMIO Universe, ChyronHego has anticipated the software-driven future and is poised for explosive growth, particularly in the broadcast segment.

“From my perspective, when you look at the fundamentals of the [video-content–creation] ecosystem, they are still very sound and expanding,” he says. “There is an increasing number of viewers, and the ways they can view things is exploding. The exciting part to me is that things like Statcast and Pitchcast are a way to further engage with the viewers, at home or on a device inside the stadium.”

Lopez joined ChyronHego from Grass Valley, where he was named president in 2012. While there, he watched, from the outside, growth of approaches like the use of virtualisation for pop-up–studio operations and the use of graphics systems to create dynamic and cost-effective virtual sets with very little time and cost.

“And now,” he says, “there are end-to-end workflows based on software-enabled tools that have video and audio switching, graphics, and playback of clips.”

Prior to joining Grass Valley, Lopez was at Miranda Technologies and Matrox Electronics. Having graduated from Concordia University in Montreal with a degree in computer engineering, he is more than familiar with the technology concepts that face the industry. The same can also be said for the business side.

“It’s clear that, today, the P&L structure and how a CFO of a large media company looks at things is being challenged by the move to opex and SaaS [software as a service] implementation,” Lopez explains. “I still believe that both models will make sense: there might be a data centre where there will be a capex type of investment that is capitalised over five to seven years, but then, [on the software side], there would be the flexibility to buy the necessary licenses for a day or a week where an operating expense is put against an event.”

He says the mix of capex vs. opex depends very much on the size of the organisation, and each company will have its own strategy around the use of SaaS, cloud environments, and even security.

“The fear that the technology will not be able to meet requirements because of bandwidth or quality of service is not an issue anymore,” Lopez notes. “Rather, it is how they want to treat and secure content and whether they are large enough to make an investment in and manage their own data centres or whether they are fine working with players like Amazon, Google, or a second-level managed service.”

With respect to market opportunities, he says that ChyronHego is closely aligned to the creative side of the industry and the growth in technology like player tracking. That provides opportunity because content creators want to engage with customers.

“Our customers want to use data and analytics and make them more easily viewable,” he says, “so that viewers can see the velocity of the ball or how it ran to the plate. On the venue side, Click Effects is helping venue [production teams] create memorable experiences so the fans want to come back.”

Lopez’s management style begins with a sense of trust among the team members across the organisation.

“That is an important first step,” he says. “Now I am going out and meeting the teams. I am a firm believer in the successes Toyota achieved with lean enterprises and going to the point of impact and figuring out where people are bringing the greatest value. It is important to understand the team’s challenge, the work they do, and then structure an organisation that benefits them for the long term.”

The overall goal is to make sure the three key stakeholders in any organisation — customers, employees, and investors and owners — are all working in unison.

“Right now, I need to spend quite a bit of time learning how the organisation has been structured via a lengthy tour to visit offices in the EMEA region — great customers in that region — and, between now and NAB, meet with the marketing teams,” he explains. “But I am real impressed with some of the stats — like that more than 80% of all mobile-production trucks in North America have ChyronHego as a graphics solution. That is a pretty telling piece of success, and you can’t have that kind of market penetration if you are not doing what the customer is looking for.”