A new Swiss sports channel, on air since November, is broadcasting live coverage of all ice hockey matches in the Swiss National League, along with matches from the Russian KHL and the Swedish Hockey League. Called MySports, it also carries Bundesliga football, handball, basketball, winter sports and large eSports events broadcasts.

Having begun broadcasting from its headquarters in Erlenbach near Zurich in mid-November, MySports is now producing its programming from a broadcast centre in a former factory on Lake Zurich and a satellite studio in Rossens. NEP Switzerland has been responsible for the planning and construction of the complex, and is in charge of day-to-day operations acting as a production service provider. 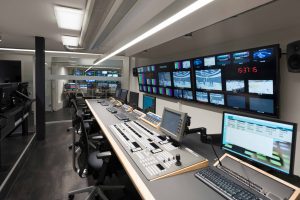 Working with German system integrator Broadcast Solutions, NEP Switzerland has set up a 1,000-sq-m, 4K/UHD studio complex that includes a playout centre in Zurich. This runs 20 live channels, including four 24/7 channels and two 4K/UHD channels – together, the implementation of 4K/UHD, and innovative control and production, make workflows both secure and capable of accommodating changes during production. The Rossens studio, meanwhile, produces all French MySports programming in cooperation with the Zurich site.

Video, audio and intercom signals are sent from Erlenbach to Rossens and vice versa. In Rossens, the French version – including studio production and commentary – is prepared and sent back to Erlenbach. As an example, the Rossens video wall in the studio takes its feed from Zurich, and the studio programme is then sent back to Zurich for production.

The production process in Rossens, including camera operation, is remotely controlled from Erlenbach. 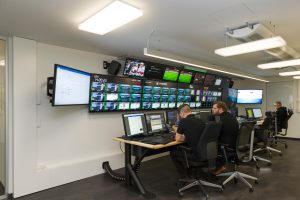 For MySports production, 40 HD-SDI and four UHD streams are sent between Zurich and Rossens via a multicast network. The storage in both studios is constantly synchronised across both locations. Each studio has its own EVS servers, located in Erlenbach, which are synchronised via a central storage unit. For audio signal transport, both sites are linked by a Ravenna/AES67 audio network.

For robust data transfer between the two sites, two redundant 100 GigE fibre optic connections are available as WANs. With the two production locations and the playout centre all fully 4K/UHD capable, MySports boasts one of the most modern studio complexes in Switzerland – its broadcast and IT technology, and the coordination of the two sites via a WAN network infrastructure, is unique in Switzerland.

For the studio and playout installation, NEP Switzerland chose 4K cameras, vision mixers, routers, multiviewers and playout solutions from Grass Valley. In the playout centre, this includes Grass Valley’s iTX integrated playout platform, while for video between the sites there are Grass Valley Densité IP-Gateways. 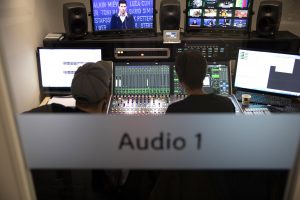 Riedel Bolero, Artist and MediorNet systems, provide communication between and within the locations, for studio, production and editors. For network control, Broadcast Solutions has implemented several network control and monitoring tools that allow remote intervention.

The basic system design at Erlenbach and Rossens uses a hybrid approach, consisting of SDI and IP technology. The studios work with a mix of familiar components and IT infrastructures. Fail-safe operation is also ensured, as the storage and production infrastructure is redundant and the contents and statuses are synchronised permanently between the two sites.

By combining the studio/playout complex in Erlenbach with the studio in Rossens, the inter-operation of both locations provides MySports with a comprehensive remote production environment. Using the latest technology and productive workflows, the facilities are well prepared for future technical innovations.