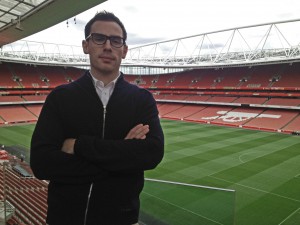 NewTek’s live multi-camera video production and streaming system, TriCaster, remains integral to Arsenal Football Club’s creation of a wide variety of original content that supports and augments traditional live linear broadcasting of its fixtures at home and away.

Overseeing Arsenal’s continuing voyage into the second screen era is Petro Mynch, who has been production manager for Arsenal Media Group, the digital arm of Arsenal Football Club, since 2008. A notable contributor to SVG Europe’s 2013 Football Production Summit, Mynch manages end-to-end production workflow pertaining to the Club’s video output across web, mobile and TV. Milestone achievements include steering the Club’s move from SD to HD in both online and broadcast video, as well as project managing the construction of the Club’s post-production facility – at the heart of which is the aforementioned TriCaster.

Updating SVG Europe on digital media developments over the last 12 months, Mynch confirms that his team continues to work with one not insignificant obstacle – the fact that they “can’t show any of the live games. We have to focus more on the complementary content, or produce something very different to that.”

With the core live linear content remaining the domain of traditional outlets such as Sky and BT Sport, the continuing focus for Mynch is on “finding a platform for this other content that is outside of our home domain, www.arsenal.com, and which provides an area strong enough to build upon and push forward.”

At present, this activity spans radio-style commentary of games as they unfold; pre- and post-match interviews; a Monday phone-in show; and foreign language content pushed to social media sites. But for press conferences and other official presentations, viewers “have to come to the official Arsenal channel and on-demand service,” says Mynch. “Moving forward, however, we are looking at shifting around some of the fun, quirkier stuff that is more oriented towards younger audiences, much of which will end up on Facebook or YouTube.”

One of the most successful examples of ‘quirky’ content was last year’s series of ‘Running Man’ films wherein the eponymous star/camera operator followed the player’s bus “for a few miles and would film himself convincing the driver to allow him to get on the bus, meet the manager and players, and obtain short interviews,” says Mynch. This relatively simple and inexpensive premise quickly yielded a huge viral hit with more than 3.5 million views now recorded.

But whilst “short-form, supplementary snippets [placed] here and there” will continue to be central to Arsenal’s content creation, the team is also weighing up  more considered material following on from the success of a Thierry Henry documentary that has picked up more than 15,000 sales since it was posted to iTunes late last year. “Rights restrictions mean that we have to charge for this sort of content,” notes Mynch, “but the Henry programme was in the company of Sherlock and Breaking Bad [on the iTunes TV sales list] just before Christmas, which is terrific, so we will be looking to do more along those lines.”

Musing on the day-to-day existence of a broadcast team that numbers 15 (out of a total workforce at Arsenal Media Group of 35), Mynch identifies NewTek TriCaster as “essential to the way we work… We built our studio around TriCaster a few years ago, and that is what we run our online proposition from. Matchday content, radio commentaries, post match interviews, bulletins, studio-focused shows… all these and more are done from our TriCaster studios.”

The adoption of NewTek technology began when the team started contemplating the move from SD to HD “and looked around at what was going on, at the people who were using TriCaster. We very quickly understood how flexible and nimble it could be.” TriCaster allowed the transition to take place “very quickly, very effectively.”

In terms of future production capability, 4K inevitably looms large on Mynch’s radar at the moment – “we are keeping an eye on that to see what happens and it would seem like a natural option to maybe do the long-form documentaries in 4K,” he says. Whatever (and whenever) its commitment to Ultra HD, the TriCaster will remain central to the workflow. A prospective new studio would again be TriCaster-based, whilst Mynch confirms that the latest generation system, the TriCaster 8000, is currently in his sights: “We have been looking at some of the benefits, particularly the social media integration, which are very appealing…”