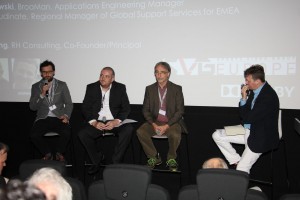 Debating audio over IP with moderator Roland Hemming at the Next Generation Audio Summit on 30 November. (Pic: Tim Frost)

A poll of the audience during a session on audio networking at SVG Europe’s FutureSport showed that half were already using networking in some form or another, which gave the three speakers – ALC NetworX’s Senior Production Manager, Andreas Hildebrand, BroaMan’s Applications Engineering Manager, Maclek Janiszewski, and Kieran Walsh, EMEA Global Support Regional Manager at Audinate – a network-experienced audience with which to discuss networking, writes Tim Frost.

Walsh covered the advantages of IP and noted that the sheer size of the IT market will advance the technologies and drive costs down. “About half the people here use IP, which indicates that it is being widely used. One advantage with IP is that you can put audio, control and other data on the one cable. But there is also the advantage of the lowering cost of bandwidth using off-the-shelf systems and infrastructure. The important things for us is that as the market matures, the costs come down, and as the market grows the cost per unit drops. But I don’t think the world has quite got there, even in audio.”

One of the great, but also frustrating, points about IT is that it is constantly evolving. With networking well-established in the venue and live environments, moderator Roland Hemming questioned the panel about the different demands that broadcast presents.

“The major difference with temporary live events and full time broadcast facility houses is that [the latter has] to have 24/7 reliability,” commented Walsh. “There are challenges with resilient control systems and that you can do seamless change-overs.”

Janiszewski was cautious about IP networking as it adds complications with regards to troubleshooting. “For broadcast it has be robust and it has to be able to set up really fast, and take it out really fast. IP systems can be difficult when you have problems – you need to have knowledge of audio, IP and cabling. So we are different to the others here as we don’t think IP is the way to go; we think fibre is the future for multiple audio signals.”

Whilst every system has its own profiles to support a product’s unique features, the capability to communicate core functions is beneficial. “We have seen working projects like Live IP,” said Hildebrand, “and a lot of manufacturers are gathering together to support media over IP now. SMPTE 2110 is about to standardise media, audio, video and data over IP, so we are absolutely on the right track on the technology.”

On the subject of adding control into the mix, the general view at the moment is that this is a step too far. Walsh said: “We haven’t dabbled in audio control, leaving that to the customer. We have an API which allows connection management and if people want to look at that API they can do it that way. For audio we are using Opticore, which was developed 20 years ago to send audio and data over fibre. So we are different to the others here as we don’t think IP is the way to go – we think fibre is the future for multiple audio signals.”

Walsh added that the industry is looking for total solutions. “A solution requires transporting audio and packaging up various standards-based technologies into a solution as a turnkey product. The complex part is making all this user-friendly, to leave the engineer time to do their job as an audio engineer.”